I also like one-panel editorials.
0 Replies
1
Reply Mon 1 Dec, 2008 05:13 am
@farmerman,
EC comics were head and shoulders above anything else being published back then. They had the most gifted artists working for them, including Jeff Davis who went on to do a lot of work for Playboy later on. William Gaines and Harvey Kurtzman, the CEO and artistic director for the group (those weren't their actual titles), had a unique vision. Gaines went on to establish Mad Magzine, an offshoot of the original Mad Comics which did some sublime satires of the pop culture of the 1950s.

EC also pioneered a science fiction genre that was a far,far cry from the juvenilia of Flash Gordon or Buck Rogers. They even cut a deal with Ray Bradbury and 'comicized' some of the Bradbury's best short stories.
1 Reply
1
Reply Mon 1 Dec, 2008 05:22 am
@Merry Andrew,
My personal favorite was Frank Frazetta who worked briefly for GAines at EC. HE teamed with the great Al Williamson to produce some of ECs best covers such as "50 Girls 50".

I have a sleeved mint condition o a few EC covers tha Frazetta did and Ill never part with em.
0 Replies
1
Reply Mon 1 Dec, 2008 05:37 am
Warren Tuft was a cartoonist who created two great newspaper comics. The first was a western called Casey Ruggles. I was too young to get in on most of that one. But, he came back with another one called Lantz. Both were beautifully illustrated, making the artwork reason enough to visit the strip on Sundays. I don't recall how many years it ran. Tuft was killed in an experimental plane's wreck. My brother gave me a book of the entire series for my birthday. The printing process on glossy paper robbed the beauty from the original work. Talk about disappointed.
1 Reply
1
Reply Mon 1 Dec, 2008 05:04 pm

Mr Boffo can sometimes be funny.
1 Reply
1
Reply Mon 1 Dec, 2008 05:10 pm
The 1950s--Dr. Fredrick Wertham publishes his book Seduction of the Innocent, which purports that comic books cause juvenile delinquency. The U.S. Senate promptly holds hearings, and Sen. Estes Kefauver (fresh from his bloody battle against that other American scourge, the mob) takes up the cause. Within months, the Comics Code Authority, a rigid set of rules for industry self-censorship, is formed. As a result, industry giant EC Comics is all but driven out of business, canceling most of its ghoulish line including Vault of Horror and Tales From the Crypt. The books are considered classics today.

(I bought many of those EC comics off the rack. After the Comics Code Authority became established, EC tried some new comics lines, but none of them matched the popularity of the old ones).

Johnny Hart's stuff can be quite funny. Other favourites:

I'll come back with more another time when my brain's working better.

Fame has it's own problems.

Give him my best...
1 Reply
1
Reply Tue 2 Dec, 2008 05:38 am
@Rockhead,
He still is able to design a few book covers for repeat custmers, but is really too ill to pursue his work.
0 Replies
1
Reply Tue 2 Dec, 2008 02:07 pm
Here is a bit more of his work. These are the front and back covers of my book, Ebenezer's Ghost. There are more black and white drawings throughout the first story. 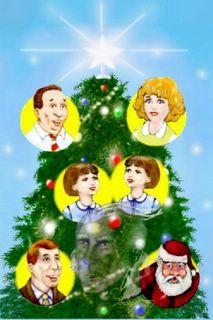 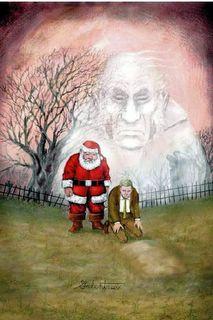 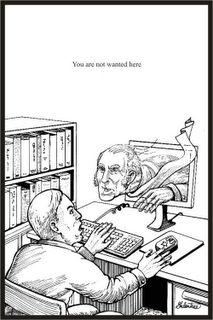 Born in Wilkes-Barre, Pennsylvania in 1900 (some sources indicate 1901), Ham Fisher started as a journalist during his teenage years. Later he became a salesman until he successfully launched Joe Palooka in New York in 1928. The strip's success helped to soldify the word "palooka" as a boxer who lacks grace or ability, although the character Joe Palooka was the heavyweight champion. A dozen low-budget film adaptations of "Joe Palooka" appeared from the 1930s into the 1950s.


Bob Hope and Bing Crosby were drawn into this 1949 Joe Palooka strip by Ham Fisher and Mo Leff.In 1920, Fisher put together a sample package for Joe Palooka but was unable to attract interest. By 1929, he was working as a travelling strip salesman for the McNaught Syndicate. However, Fisher also hawked his own unpublished, unsold strip. After he'd secured over 20 sales, including to New York's Daily Mirror, Fisher informed his managers at McNaught, who decided to give Joe Palooka a trial run. The comic strip soon became a national success.

Searching for assistants to work on the strip, Fisher hired (among others) Al Capp, later famed as the writer-cartoonist of Li'l Abner). While ghosting on "Joe Palooka," Capp created a storyline about a stupid musclebound hillbilly named "Big Leviticus," who was an obvious prototype for the L'il Abner character. When Capp quit "Joe Palooka" in 1934 to launch his strip, Fisher badmouthed him to colleagues and editors, claiming that Capp had stolen his idea. For years, Fisher would bring the characters back to his strip, billing them as "The Original Hillbilly Characters," and advising readers not to be "fooled by imitations."


Feud
The Capp-Fisher feud was well-known in cartooning circles, and it was personal. Even as Capp's strip eclipsed "Joe Palooka" in popularity, Capp did not forgive. In the 1930s, Fisher hired away Capp's top assistant, Mo Leff. After Fisher underwent plastic surgery, Capp once included a racehorse in "L'il Abner" named "Ham's Nose Job." Traveling in the same social circles, the two men engaged in a 20-year mutual vendetta, as described by the Daily News in 1998: "They crossed paths often, in the midtown watering holes and at National Cartoonists Society banquets, and the city's gossip columns were full of their snarling public donnybrooks."

In 1950, Capp wrote a nasty article for The Atlantic entitled "I Remember Monster." The article recounted Capp's days working for an unnamed "benefactor" with a miserly, swinish personality, whom Capp claimed was a neverending source of inspiration when it came time to create a new unregenerate villain for his comic strip. The thinly-veiled boss was understood to be Ham Fisher.

Fisher retaliated clumsily, falsely accusing Capp of sneaking obscenities into his comic strip. Fisher submitted examples of "L'il Abner" to Capp's syndicate and to the New York courts in which Fisher had identified pornographic images that were hidden in the background art. However, the sexual material had actually been added by Fisher. Capp was able to refute the accusation by simply showing the original printed strips.

In 1954, as Capp was applying for a Boston television license, the FCC received an anonymous packet of pornographic "L'il Abner" drawings. The National Cartoonists Society convened an ethics hearing, and Fisher was expelled from the same organization which he had helped to found. Around the same time, Fisher's mansion in Wisconsin was destroyed by a storm.

On September 7, 1955, Fisher committed suicide in his studio. Such was his professional isolation that his body was not discovered until December 27 of that year.

The feud and Fisher's suicide have been fictionalized with all names changed and many details altered in the mystery novel "Strip for Murder" by Max Allan Collins.