Forums: Comics, Cartoons, Comic Strips, Comic Strip, Comic
Email this Topic • Print this Page
Reply Sat 28 Oct, 2006 08:27 am
Type: Discussion • Score: 3 • Views: 16,821 • Replies: 155
No top replies
1
Reply Sat 28 Oct, 2006 08:37 am
The thing that prompted me to start this thread, I recently reconnected with a lifelong fav of mine, Gasoline Alley. For a time, after the originator of the strip died, I avoided reading it, because, it was, frankly, trite and boring. But it is now in a phase I find compelling.

Gasoline Alley was the first comic strip to feature characters who age. One of the founding personalities of this one was named Walt. He discovered a baby on his doorstep, and he adopted him. Skeezix was the baby's name.

Well, now, all these years later, Walt is a widower, cared for by a woman who was introduced late in the series. The latest story line, we are watching as the characters discover Walt has alzheimer's. His grand daughter just brought in his mail, and he doesn't recognize her. I am very curious how the artist handles this story line.
0 Replies
1
Reply Sat 28 Oct, 2006 11:51 am
There is a thread running about Dilbert.
Scott Adams Read a2k?
In today's episode, the rat says, "Hey, I'm winning every debate on this forum by saying the same thing."

rat: "How would you like it if Hitler killed you?"

Have you ever seen a site called the Comics Curmudgeon? It's pretty funny, if you don't mind the guy that writes it making fun of Gasoline Alley pretty regularly.
0 Replies
1
Reply Sat 28 Oct, 2006 01:48 pm
Can't say I've seen it, but will search in a few minutes.

I've criticised Gasoline Alley plenty myself. If I recall correctly, Mad Comics (preceded Mad Magazine) did a good Gasoline Alley, also.
0 Replies
1
Reply Sat 28 Oct, 2006 02:43 pm
I have a brother that's a very good cartoonist. He is on the verge of being published in a European market, in a language he doesn't even speak. The author explains it to him in English, and then somebody pencils it in in the other language. I don't want to describe it further, because I don't have anybody's permission to even talk about it.
0 Replies
1
Reply Sat 28 Oct, 2006 09:59 pm
One of my all time favorites is Alley Oop. It's not the same quality, these days, now that V T Hamlin, the cartoonist, has died, but I have fond memories. 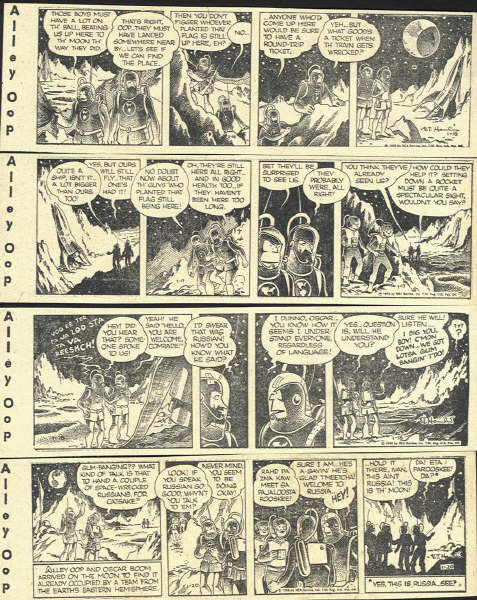 just finished reading Walt and Skeezix: The Lost Newspaper Dailies, the first of a series of books reprinting the series , published by Drawn and Quarterly and edited by Chris Ware, the first volume covers 1921-22, beginning when baby Skeezix appears.

looking forward to the second volume

A few popular cartoonists have tried to insist on a larger size for their Sunday strips, notably Calvin and Hobbes artist Bill Watterson, but newspaper editors reacted irately.

Aside from its brilliant humor, "Calvin and Hobbes" was a joy to read just for the way in which Watterson tried to break free of conventional panel layouts. The Sunday installments were wonderful and sometimes beautiful experiments in formatting. I especially like the asymmetrical layouts... panels overlap others in no apparent pattern; each panel has different dimensions; some panels have borders while others don't, etc. It was like a comic strip set inside a Mondrian painting.
0 Replies
1
Reply Sun 29 Oct, 2006 07:15 pm
Some examples: 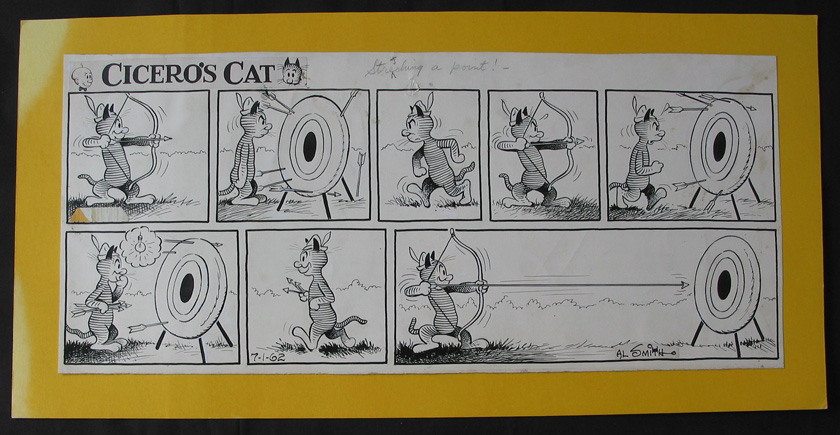 The artist that created Mutt n Jeff also created Cicero's Cat.
0 Replies
1
Reply Tue 31 Oct, 2006 05:23 pm
i like that one
0 Replies
1
Reply Tue 31 Oct, 2006 05:27 pm
After Ernie Bushmiller died, several artists have been asked to take up Nancy. Here is one by Jerry Scott. I had this posted on my refrigerator door, when my kids were in high school. 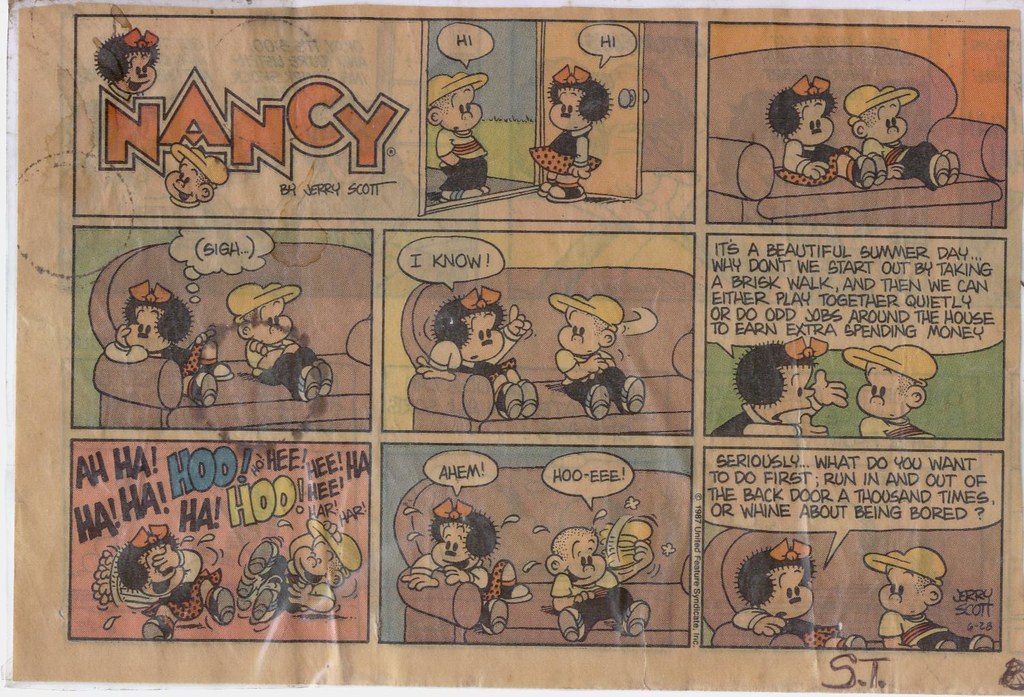 0 Replies
1
Reply Tue 31 Oct, 2006 05:39 pm
Watterson was not the first or even the best at "breaking the borders '.. The artists who produced the old EC comics "The Crypt Keeper" and "The Vault of Horror" were some real geniuses at that. When I was a little kid of a bout 5 or 6 my cousin had an entire collection of Crypt keeper comics and I remember reading them and getting the living **** scared out of me.

I distinctly remember one where a guy , who couldnt die, was stranded in the desert and was being eaten alive by buzzards. There was another one called "HEAP" which was about this pile of rubbish that just came alive and started on a rampage of fetidididdity.

They dont make comics like that any more.
1 Reply