Howevetr that being saidf, I've seen Nadal play some mind games often with his opponents. This was the first time I've read about him stooping to being that boorish and try that sort of crap. Oh well, frustration got the better of him. I understand that Rosol's noise making during the match (and the ref ignoring it) got into his head.
2 Replies
1
Reply Thu 28 Jun, 2012 05:40 pm
@Ragman,
Ahh, similar to Sharapova, who uses her high decible screetches/grunts selectively.

This will possibly come up as renewed controversy.

Time for me to look at the match...
1 Reply
1
Reply Thu 28 Jun, 2012 05:49 pm
@ossobuco,
I heard that the tennis regulatory group (whoever that is) is looking making a regulation that takes the future group of newbies and cut the decibel level down, limiting the grunts and noise level; however, the veterans will get a pass- grandfathering them in. Niiii-icce!

"WIMBLEDON, England -- First Rafael Nadal took a tumble into the net. Then he began complaining to the umpire. Then he bumped his opponent, Lukas Rosol, during a changeover.

..."Nadal's demeanor grew glum as the match progressed, and in the third set, he bumped into Rosol as they crossed to reach their chairs for a break.

"He wanted to take my concentration," Rosol said. "That's OK. I knew he would try something, but I was concentrating."..."

..."Following the match, Nadal declined to say what had him annoyed.

"Anything that I will say now will sound against me," he said. "It's not the right moment for me to say what happened out there, because it's going to sound like an excuse."..."

5.01pm: It's time to report a crime, one which probably goes some way towards explaining the picture at the top of this blog. According to Reuters:

Rufus the Harris hawk which patrols the skies above Wimbledon to deter pigeons has been stolen, police said on Saturday.

The bird was taken, along with his cage, from a car parked in a private drive in Wimbledon with the rear window open for ventilation.

Rufus, a four-and-a-half-year-old hawk, is environmentally friendly because he scares off pigeons, which can distract players, purely by his presence.

His distressed owners are appealing for help in getting the bird of prey back so he can resume his role of turning the world's most prestigious tennis tournament into a pigeon-free zone. 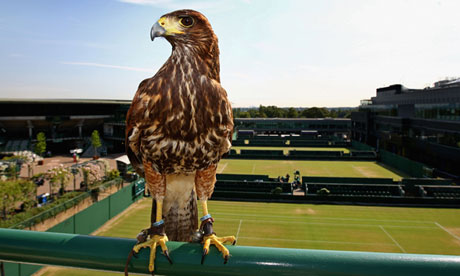 Mardy Fish also recently had some procedure (a surgery?) for heart palpitations of some sort, and also made it through.

I'm still a Federer fan; that last match was a squeaker.

And Serena's still in there.

Oxfam could be set to reap more than £100,000 in winnings if a late benefactor's Wimbledon wager comes off.

Oxfam spokesman said "we will be keeping our fingers firmly crossed for Federer's success".

Mr Newlife, from Tackley, had written to bookmakers William Hill with the request for the bet in 2003.

Graham Sharpe, who took the original bet, said the wager was "unique".

"We're not likely to see its like again for some time," he said.

He added that "a number of people have drawn Federer's attention to this bet".

"I don't know whether he's thinking about this hugely philanthropic gesture to Oxfam.

"It's certainly not going to harm his reputation if that's a side project," he said.

Andrew Barton, head of relationship marketing for Oxfam, says: "Legacies amount to 12 per cent of our total income from individuals, so they're essential to us, and as this case proves they can come in all shapes and sizes.

"We wish Roger Federer all the very best for Wimbledon."

Federer had to overcome a back injury and the rain to beat Xavier Malisse in the Wimbledon fourth round on Monday.