Forums: Philosophy
Email this Topic • Print this Page
Reply Mon 15 Aug, 2022 04:32 pm
Piggy’s thread “matter vs anti - matter” has been forced stopped by “abnormal” users. Smart researchers should be AWARE the research there is far not yet completed.
There are three of my threads have been forced stopped or destroyed by “abnormal” users or abusers. It’s unfair for normal users.
Piggy has wasted much time to play games with or combat with those “abnormal” users or abusers. Normal scientific research has been disturbed again and again.
It’s a shame in the history of science.
Next go on with normal scientific research.

Those “Lord of creature” and the First Order are powers in this cosmos. They have their firm “position / stance”. Then, they can form “poles” in society.
Such eternal weaker / “loser” as the pig is not powerful enough to establish firm “position / stance”. Then, he can’t form a “pole” in society.
When the pig encounters those “Lord of creature”, he has to bow to them and say “hello”; when the pig encounters the First Order, he has to bow to them and say “hi”. When the pig is fishing and drinking beer by the riverside of Shapu village while thinking about physics and cosmos, he get back the “fairy feeling of himself”.
That’s oscillation in different external environments.

Actually there is the same phenomenon in nature. Take a look at these spiral springs again: 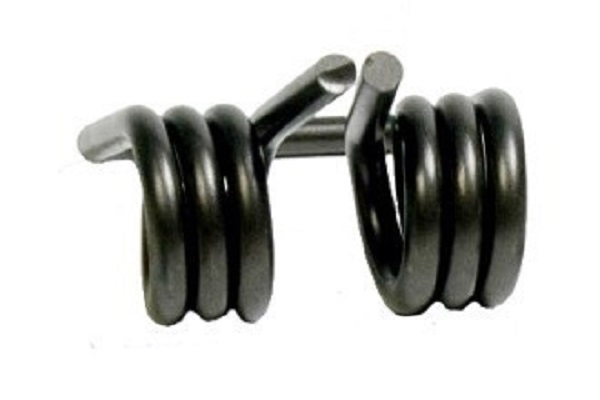 In piggy’s physics model, charge or say the electrical polarization is directly reflected by the spiral chilarity of the spherical electromagnetic wave. The fact is that the electrical polarization of proton, electron, etc, is very firm.
In piggy’s physics model, such spherical electric wave without spiral chilarity can exist. It can serve as the model of neutrino.
So, in such model, neutrino should be able to oscillate in different external electrical environments and demonstrate electrical polarization between +, neutral and - . Then, people can consider anti – neutrino actually is neutrino itself, because +, neutral and – are just different states of that thing itself; also people can consider anti – neutrino is not neutrino itself, because different states have different inherent PROPERTY / chirality.

Actually, there is something else in piggy’s physics model can serve as the model of neutrino too: “the released photon without spiral chilarity” (relevant materials for reference: the unit charge model ahead in the thread "matter vs anti - matter" as well as relevant chapters in the physics thread). Then, in such model, anti – neutrino actually is neutrino itself.

Piggy has been “touchy and feely” over this hard problem for a few years. Not yet can make a decision / choice. 呵呵
Please don’t “sure enough” the issue of neutrino can overthrow Einstein’s theory. 呵呵
Perhaps it’s just a problem troubling that so called what “standard” MODEL, not nature.


The development of history is the course of leaving those stumbling stones behind one by one.
The biggest stumbling stone in history of the cosmos would be the First Order. Piggy “sure enough”.

As piggy said in the physics thread, Once upon a time we have a primary discussion about the mechanism of the absorption / emission of photon by atom in PHF. (piggy means something besides the quantum mechanism of energy levels, the focus is where’s the photon gone after it’s absorbed by atom).
https://physicshelpforum.com/threads/the-attraction-of-massless-particles-to-other-massless-particles-and-to-matter.15218/post-43478
The “standard” answer from that “authentic” rabbit Dandan was “it’s gone” “just gone”. Piggy’s humble opinion is that such “standard” empty answer can only be brought to university to fool the students. They have to unconditionally accept the “standard” constraint anyway.

Because the electron is in outskirt of the atom, piggy’s humble opinion is the photon is deposited in electron after it’s absorbed by atom. In piggy’s physics model, this event is easy to understand: it’s just like a drop of rain fallen into the pool.

Then, when the photon is emitted by the atom, actually it’s from the electron.
So, under such a mechanism, we can expect the released photon retain the spiral chirality of the electron.

Assume a photon is emitted by an anti – atom, we can expect the released photon retain the spiral chirality of the positron.

In this sense, anti – photon is not the photon itself.

Addendum:
In piggy’s physics model, there could be a neutral case: “the released photon without spiral chilarity”.

According to the principle illustrated above, we can expect the mechanism of the emission of photon by atom can’t generate neutrino. The significant thing is that it’s fact. Coincidence again? Nowadays they “authentic” / “standard” theory just can’t do that.

0 Replies
1
Reply Thu 18 Aug, 2022 05:15 pm
To prevent the attacking of that extremist stalker, piggy has to put on a steel helmet. It’s a shame in the history of science.