What was the leading cause of death for law enforcement last year? 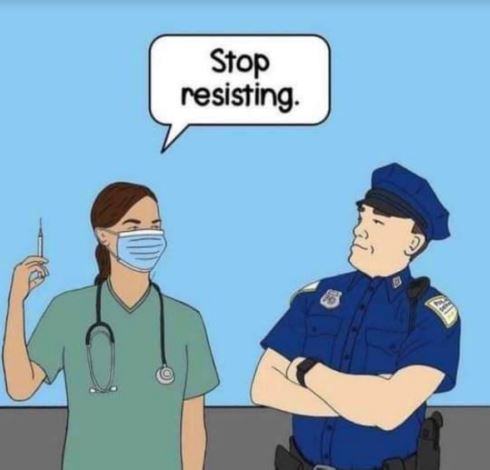 3. This is an anti-union thread. Police unions are defending the right of police officers to refuse vaccinations.
0 Replies
1
Reply Thu 21 Oct, 2021 07:04 am
This is a pro-union thread. Rogue cops have no right to endanger the lives of other cops: most cops were vaxxed prior to the mandate.

There is always a right to refuse vax, along with the obligation to accept the consequences. There is no right to infect others. No right to keep a job for refusing a vax.
2 Replies
-4
Reply Thu 21 Oct, 2021 07:32 am
@bobsal u1553115,
I am not sure you understand how unions work.

A union represents the will of its members. If the bosses want to force the workers to do something against their will, the union is the leverage the workers have to say no.

In this case, the workers want the right to choose to be vaccinated or not.

Votes are held and the majority wins. No single nay vote or nay votes under 50% holds the day. After all this is a union, not the Masons.

The ability to challenge a rule backed with a union rep is not the same being granted an exception. Unions are about majority rule over contracts that have as few exception as possible. To think otherwise demonstrates a marked ignorance of what a union is about.
1 Reply
-3
Reply Fri 22 Oct, 2021 07:45 am
@bobsal u1553115,
Quote:

There is no right to infect others.

Since the people who receive the experimental injection will continue to transmit disease and infect others, why do you want to punish the people who see the silliness of pretending they're protected?
2 Replies
1
Reply Fri 22 Oct, 2021 07:49 am
@Glennn,
nonono.
0 Replies
-4
Reply Fri 22 Oct, 2021 09:00 am
@bobsal u1553115,
The police unions are opposed to vaccine mandates. This is not surprising, vaccine mandates result in union members being fired for not complying, and unions generally oppose policies that result in workers being fired.

https://www.google.com/amp/s/abcnews.go.com/amp/Health/chicago-police-union-takes-fight-vaccine-mandate-court/story%3fid=80683056
0 Replies
-2
Reply Fri 22 Oct, 2021 09:07 am
@Glennn,
Bobsal and Glennn represent the two extremes. For the record, I think Glennn's position is insane.

There is a middle that..

1) accepts that vaccines are safe and effective and should be provided to wveryone who wants them.

2) rejects the vaccine mandates which force vaccines on people who don't want them.

The political left wants to confuse the two issues. What we are debating not whether the vaccines work... we are debating whether union workers should be fired for non-compliance.
2 Replies
-2
Reply Fri 22 Oct, 2021 09:14 am
@maxdancona,
Quote:

What we are debating is not whether the vaccines work . . .

Correct. It's already been established that they do not prevent infection or transmission. Therefore, union workers should not be fired for seeing the silliness of injecting such a thing into their system.
1 Reply
-1
Reply Fri 22 Oct, 2021 09:48 am
@Glennn,
Just to be abundantly clear Glennn. There is an old saying; "I don't agree with what you are saying, but I will defend to the death your right to say it". I think your position is idiotic.

I am defending your right to be an idiot.

I think your position is idiotic.

As proof that it is your position that is idiotic, I'll point out your failure to produce some proof that what I've said about the experimental injection is not true . . . unless you're about to do that.

I am defending your rights (even though I think your position is idiotic). I would hope you can at least appreciate that.
1 Reply
0
Reply Fri 22 Oct, 2021 10:35 am
@maxdancona,
But if you can't show that the experimental injection prevents infection or transmission, then it is your position that is idiotic. How can you not understand that?

You must not WANT to understand that; cuz it's the simplest thing to understand. Basically, I'm asking what value you see in an experimental injection that doesn't prevent infection or transmission. My guess is that you're going pretend you don't understand what I'm asking you.

Public heath interest trump any and all union contracts.

This fact isnt open to debate, it just is. You are denying reality.
2 Replies
0
Reply Sun 24 Oct, 2021 05:06 pm
@maxdancona,
Wrong, again. You seem to think it's all right to knit reality out of whole cloth.

Where's the unions in this cop story:

The two are facing multiple charges including larceny and reckless endangerment.
Two police officers in Connecticut resigned earlier this month after they were accused of drinking in their patrol cars and not responding to service calls while on duty, according to reports.

"I'm glad that this incident is now behind us from a department perspective," Kulhawik told the newspaper.

CBS New York reported the two were suspended last year after they were discovered together at a hotel instead of working and drinking in a school parking lot, police said.

According to CT Insider citing an arrest warrant, the duo was found by their supervisor on the night of October 9 2020, and cops said they "were not in a condition to respond to calls for service."

The warrant said that during their investigation, authorities also found broken beer bottles at the school that was linked to both officers, according to the report.

Sarah Laudano and Michael DiMeglio were suspended a year ago after a supervisor found them together at a hotel instead of out on patrol.

Cops say the two had been drinking in their patrol cars, hanging out behind a school.

The resignations do not affect the charges against them, which include larceny for accepting pay but not working.