Forums: Avatars, a2k Community, Viz
Email this Topic • Print this Page
Reply Tue 31 Aug, 2021 10:54 am
There’s two types of avatar, abstract ones, and characters. I want to talk about those of us who have a character as our avatar.

Some people go one step further and post their photos like, or those of their pets, which gives us an insight into their lives.

I’m talking about characters, if anyone has chosen one, be it a cartoon, or a tv character or animal they might want to talk about why.

One thing puzzles me, and I’ve noticed a recent influx of posters whose avatars are sexualised teenage girl anime figures, and I suspect a few of them are middle aged men. I don’t know why anybody would choose something so different from how they are.
Type: Discussion • Score: 0 • Views: 1,262 • Replies: 36
1
Reply Tue 31 Aug, 2021 11:14 am
@izzythepush,
Interesting question. My avatar is a demonic version of Ned Flanders from the long running US animated series "The Simpsons". I originally posted it as a Halloween avatar and liked it so much I kept it. I love the series and Ned is one of the more interesting characters in terms of development, probably the most developed character outside of the primary characters with several episodes dedicated to him. I loved the transposition of Ned (very religious) and the Devil so I kept it.

As for men taking anime girls as their avatar, that is a thing, not sure why. I might look it up on the Internet but I know I've seen stories about adult men driving shows like Sailor Moon and My Little Pony.
2 Replies
1
Reply Tue 31 Aug, 2021 11:44 am
@engineer,
There’s an episode of Bob’s Burgers about a group of middle aged me; obsessing about a my little pony type franchise.

The Simpsons is really good, and Ned is a really good complex character. I like the ones with his beatnik parents.
0 Replies
1
Reply Tue 31 Aug, 2021 12:06 pm
My avatar obviously is a play on my name. My father used to say that the Tower was in the family for centuries.

I used to post a picture of myself...but that was a picture from an earlier day. I've aged.

Back then...I was very much like my avatar.
1 Reply
1
Reply Tue 31 Aug, 2021 12:11 pm
My avatar changes over the years. First myself, then Pogo Possum, then something else, then FDR, now Thomas Paine. I did FDR because I believe in his New Deal pretty much as he proposed it. Eventually I decided Thomas Paine most reflects where I am these days.

As for men taking anime girls as their avatar, that is a thing, not sure why. I might look it up on the Internet but I know I've seen stories about adult men driving shows like Sailor Moon and My Little Pony.


Creepy
1 Reply
1
Reply Tue 31 Aug, 2021 02:19 pm
I too have change avatars - I believe my first one was the Great Mr. Limpet. No I am not a fish so I really do not resemble him - but perhaps resemble him as I feel a fish out of water. I also had Lady Fish - his love interest once he changed into a fish (his human wife was not happy).

My second was the mean queen from Snow White. One of my daughter's loved that movie as a child and always thought that these disney villains were not treated fairly. Not to mention I kind of like the mean ones. To add to this when my daughter was just under 3 we visited Disney and of course had to meet up with Snow White. In the forest where Snow White was - the mean queen was there so my daughter just had to meet her too. Instead of being frightened of her (as you would expect a young toddler to be) my daughter proceeded to ask her "Can I do whatever I want?" The Queen almost broke from character as she started to laugh, quickly recovered and said in her mean queen voice "Yes". The whole group of us around her though did burst into laughter - what the heck and why is she asking this; she proceeded to ask this same question of any character she met. --- find out later a friend of mine told her that children can anything they want in disneyland - I guess she was just verifying that this was true.

So yeah the mean queen holds a special place in my heart for various reasons. Although I have not tried to poison anyone.

i am not at all like my current one, but i added it because the expression on that great dane's face is priceless.

after the fact i noticed the 3D illusion of him poking his head thru a cutout in the page. 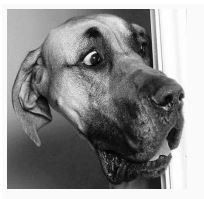 i am not at all like my current one, but i added it because the expression on that great dane's face is priceless.

after the fact i noticed the 3D illusion of him poking his head thru a cutout in the page.

My first and favourite avatar was a shadow figure. I'd scooped it from the internet before clueing in that it wasn't in the public domain. It, and my handle here, was pretty reflective of a need for anonimity, at the time.

The next two were just bits of silliness. A stick figure of sorts and a goofy puppy. Hmmm.

Now, it's just the random abstract a2k offers. What do you think that means? Heh.
1 Reply