Faraday's law of induction is not true

Forums: Electromagnetism, Electricity, Induction, Electric Current, Faraday Law
Email this Topic • Print this Page
Reply Sat 6 Feb, 2021 05:58 am
One of the fundamental laws of electromagnetism is the “Faraday's law of induction”. This law states that the induced EMF in a wire loop is equal to the rate of change of the magnetic flux enclosed with the loop, or E=dΦ/dt (the minus sign before “dΦ/dt” is left out because it is not important for our discussion). In the textbooks is often given an example of a loop in the shape of a rectangle which rotates in a magnetic field (figure below). 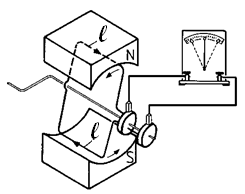 What is meant by “the rate of change of the magnetic flux enclosed with the loop”?
To explain this, we will make a comparison. If we hold a ring in front of our eyes as if we want to see through it, then it has a shape of a circle. If we turn it 90°, we only see a line. In every other intermediate position of the ring, we see an ellipse. In the first position, the ring has the maximum area in front of our eyes; in the second, the minimum, i.e., zero. If the ring starts to rotate about its axis starting from the second position (0) and has turned 180°, then the area we see in the course of this rotation can be represented with a sine curve of half a period.

If we connect the ends of the wire loop to an oscilloscope, would we really get this curve ?!!

Let’s consider the following experiment. From a lacquered copper wire we cut off twenty to thirty pieces of about 10 cm. From them we form a bundle of parallel wires and connect the two ends with one more wire each. The other ends of these two wires are connected to a sensitive analog ammeter. We hold the bundle horizontally and move quickly a strong and broad magnet downwards on its left side. The pointer of the instrument will make a deflection to one side. If we now move the magnet quickly downwards on the right side of the bundle, the instrument will make a deflection to the opposite side. The magnetic flux that we have produced in the wire is now in the opposite direction to the one in the first case, which is why the deflection is in the opposite direction. The motion of the magnet produces current even if we only approach it to the bundle from one side without lowering it below the bundle. In this case the current is somewhat weaker. But if we now move the magnet down to the middle of the bundle, the instrument won’t show any current, because the left and the right halve of the magnet act on opposite sides of the bundle, canceling each other out.
We can do the experiment with only a single wire instead of a bundle, as long as we have a very strong magnet and a very sensitive ammeter.
You can imagine that inside this wire there is a propeller or there are many propellers in a row. When you turn a propeller manually from the left side, then it is turning in one direction and it is blowing on one side (plus), but it is suctioning on the other side (minus). When you turn the propeller from the right side, then it is turning in the contrary direction and the air current is in the opposite direction.
But we cannot turn the propeller from above. Exactly the same picture we have with the magnet and the wire. 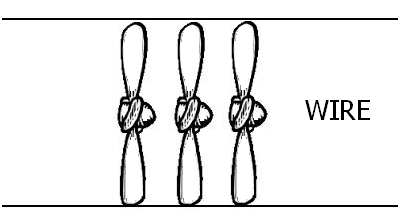 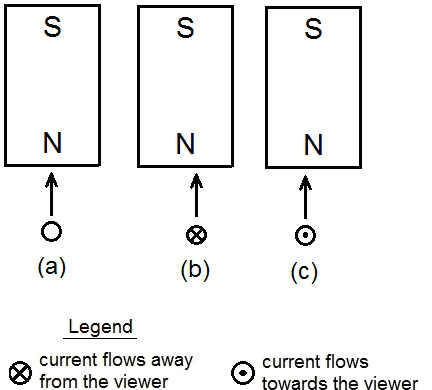 Consider now this experiment: a straight conductor is moving vertically exactly in the middle between two identical magnets [ figure (a) below ]: 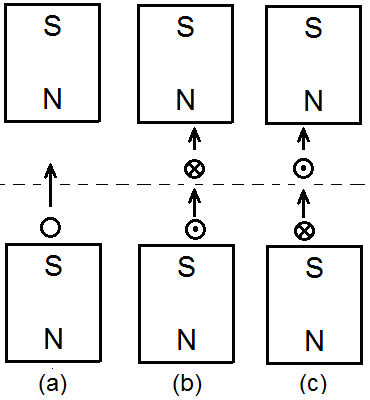 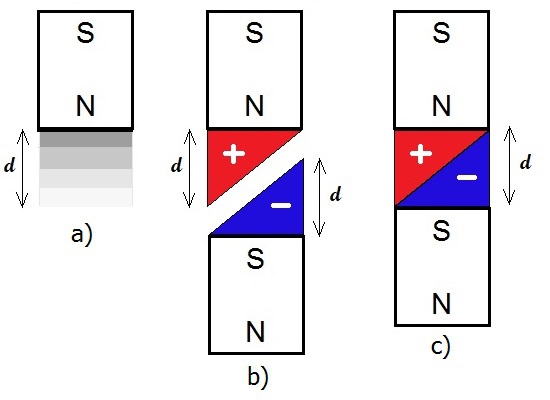 The weakening is also symbolically represented by the red and the blue triangle in the figure (b). If the two identical magnets are brought at the distance ‘d’ (or lesser than ‘d’) without allowing them to come together, then in the interspace between them there is a homogeneous magnetic field because the two fields complement each other. This means that the strength of the magnetic field is the same in every point of the interspace (figure c).
The magnetic field is homogeneous in terms of strength, but it is not homogeneous in terms of polarity. The Plus and the Minus retain their character just as before the bringing of the magnets close to each other. (I call the pole of a compass, which points North, the Plus pole. Please see this very important question Is positive and negative electricity nomenclature arbitrary?)
Please look at the figures below: 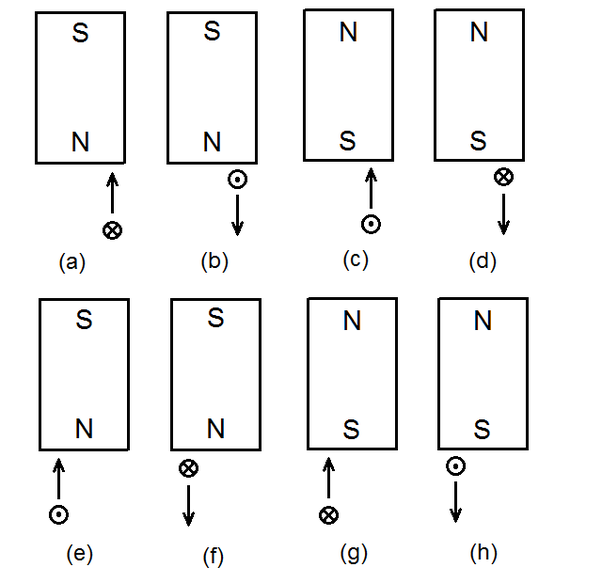 Here are presented all the eight possible variations of a conductor moving toward and away from a magnet. Consider the first (a) and the last (h) variation. These two variations were unified in a single experiment in the second-to-last figure above (figure b). But what happened there? The current induced in the conductor dropped to zero exactly in the middle between the magnets. How so? Because the Plus and Minus are of the same strength in that point. Therefore they cancel each other out regarding the electromagnetic induction.
Please look now at the figure below. 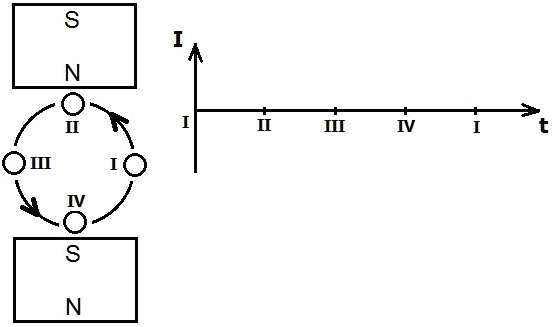 A straight conductor is rotating uniformly counter-clockwise in a homogeneous magnetic field according to the figure above. The rear end of the conductor (that which is farther away from us) is connected to the positive terminal of an oscilloscope, the front end to the negative. What will the graph of the induced current (/voltage) look like?

Please look at the picture below: 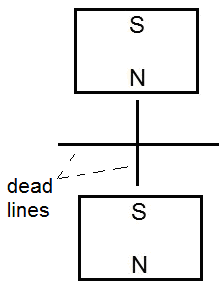 There are two crossed lines in it, which I call “dead lines”. Whenever the conductor moves through one of these lines, there is no current induced in it. Therefore I have named them “dead lines”. But in reality these dead lines are dead planes. The horizontal plane I call the main middle plane.
Which plane is represented by the vertical line? It can be any vertical plane which goes through the central point between the magnets (that is, the cross point in the diagram above). But which one out of the infinite number of them? That depends on the direction of the conductor. Let’s say that the rotating conductor is positioned exactly in the North-South direction. In that case the vertical plane is also in that direction.
So, when the conductor is rotating in a homogeneous magnetic field as in the figure above, the induced current will be zero in the four points marked with the Roman numbers (graph below).

When a rectangular loop is rotating in a homogeneous magnetic field, then we have in fact only a second identical conductor which rotates diametrally to the first, because only these two sides of the loop play a role in the induction of the current (marked with “L” in the figure below). Since the current in the second conductor has a contrary direction, the induced current in the loop will be twice as strong (recall that it is a loop.) The graph above is valid also for this loop, only we have to draw the waveform twice as high.

So, the Faraday’s law of induction is not true because it predicts a wrong result. I believe (and that is not without grounds) that Michael Faraday has never defined this law. He was a great experimentalist and he would have made many experimental trials before definitely defining something.
I rather believe that this law has come among the people through the third of the Maxwell’s equations and somebody has called it so in honor of the great Faraday.
You may ask yourself: is that equation really true?

I was once asked the following question: How come identical situation of the magnets and the rotating loop gives rise to opposite effects in I - II and in III - IV interval?

Look please at the figure below: 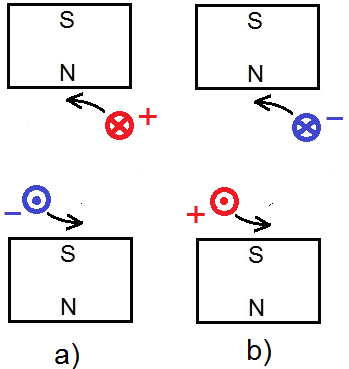 The red and the blue circles are cross sections of the two relevant sides of the rectangular loop.
Each of the two ends of the loop is connected to one slip ring. One of the slip rings is connected to the Plus-input of an oscilloscope (represented with the red Plus sign in the two figures above); the other slip ring is connected to the Minus-input (represented with the blue Minus-sign).
Let's say we have colored the two relevant sides of the loop - one in red color, the other in blue color.
In the figure (b) the loop has rotated 180 degrees with respect to its position in the figure (a).
In the red cross section of the figure (a) the current flows away from us and then enters the Plus-input of the oscilloscope. Therefore we get a positive voltage on the screen.
In the blue cross section of the figure (b) the current flows also away from us and then enters the Minus-input of the oscilloscope. Therefore we get a negative voltage on the screen.
Type: Discussion • Score: 0 • Views: 919 • Replies: 1
5
Reply Sat 6 Feb, 2021 06:02 am
Thanks; this was keeping me up at night.
0 Replies