From the history of electromagnetism it is known that Benjamin Franklin (1705-1790) is the man who was the first to introduce the terms “positive” and “negative”, i.e. “plus/minus” in the field of electricity in the middle of the 18th century. Previously, the different types of electricity had been called “vitreous” (meaning “glass”) and “resinous” (meaning “amber”), since the glass and the amber were the most often rubbed objects to produce the opposite electricities. At the time when Franklin gave his contribution, people had actually spoken of two types of electric fluids; however, Franklin argued that there is only one electric fluid, and the excess and the shortage of it in the objects he called “plus” and “minus”. He said that bodies in normal condition have medium amounts of this fluid and are therefore neutral. When two objects are rubbed against each other, one allegedly transfers a part of its fluid to the other and thus the first becomes minus-, and the second object plus-electrified.

That these things (i.e. plus and minus in the electricity and in the magnetism) are not arbitrary, I have a proof which I call an ultimate proof. A proof is ultimate when we perceive the truth immediately (directly, unmediated) with our senses, in this case, with our eyes.

If we rotate the discs of a Wimshurst machine by turning the crank manually to the right in a dark room (the most noticeable results can be seen at night in a room with a little exterior street light entering it), and if we do this for at least 10-15 seconds to let the eyes get used to the feeble light, we will notice that the horizontal quadrants emit a light flicker, whereas the vertical are completely dark. On turning the crank to the left the flicker relocates to the vertical quadrants, whereas the horizontal ones now remain dark. Looking even more attentively at the scene, we will notice an essential qualitative difference between what happens in the left and the right quadrant (i.e. the upper and the lower one when the crank is turned to the left). The flicker in one horizontal quadrant is directed from the metal sectors outwards, in the other one inwards. In other words, in the left quadrant the metal sectors are dark and the flickering light glows around them, but in the right quadrant the metal sectors are illuminated and around them it is dark.

If we fill the middle of a ring magnet (taken out of a small loudspeaker) with iron filings, then we tap the magnet to allow the iron powder to freely take its shape, a difference between the one and the other side becomes clearly visible. At the pole which points North a form of blowing is evident (as if we put the lips forward), and at the pole that points South a form of suction (as if we put the lips inwards). Hence, the plus-pole with an effect outwards is the magnetic South pole of the Earth, and the minus-pole with an effect inwards is the magnetic North pole of the Earth.

As a further evidence I want to share an interesting experiment I came across in the book Physik, Volume 2, from the author Hermann von Baravalle (pages 83–84).
Look please at the setup below.
When high DC voltage is connected to it, then sparks start to jump across the upper part of the circuit. 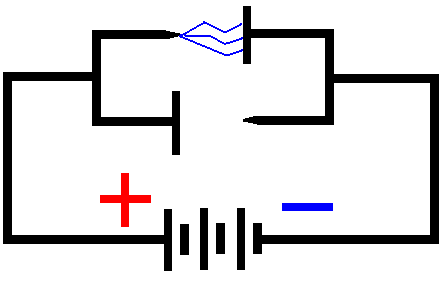 As soon as the poles of the voltage source are reversed, then sparks start to jump across the lower part of the circuit (circuit below). 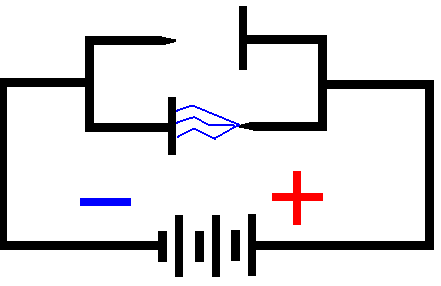 The two different kind of ends where the sparks jump are a thick sharpened wire and a round metal plate.

In this experiment we see that the sparks appear only in the branch where the Plus is connected to the sharpened metal wire, while the Minus to the metal plate. Since the Plus means blowing, the Minus means suctioning, it is much easier for the electricity to bridge this gap than the other, because very high pressure is created at the sharpened point. We all know that the water-jet which comes out of a pipe will reach farther if we narrow the pipe. This comparison is valuable for understanding of what happens. At the same time, the suctioning is greater if the suctioning area is bigger. (see also Edit [Moderator]: Link removed?)

Here is another evidence that the electricity flows de facto from the Plus to the Minus pole of the battery. When a carbon arc lamp is connected to a DC source, the positive carbon electrode dissipates, while the negative electrode remains pretty intact. When this lamp was used in the 19th century as a street lamp, they had to move the positive electrode closer from time to time, since the positive electrode's dissipation had as a result increased distance between the electrodes and the lamp stopped to shine (i.e. with the increased distance the applied voltage was not sufficient to make an arc).
This is approximately the form of the carbon electrodes before and after some time of use: 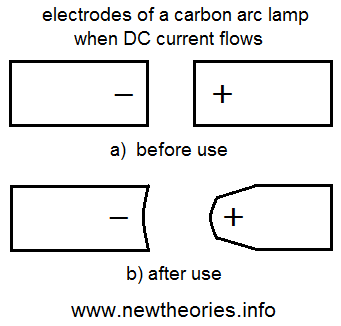 Let me jump to the question what a battery is. A battery can be regarded as a container of dissolved agent (acid, base or salt) wherein two plates of different metals are partly immersed. Instead of one metal plate, a graphite rod can also serve. Just as there is an exception to every rule, so it is in the electromagnetism. Carbon is a special and unique case of a non-metal that is conductor of electricity. Consequently, it is also a good electrode in a battery.

When two rods (say graphite and zinc) are partly immersed in a dissolved agent, then the part of the graphite rod which is outside the liquid is polarized in one sense (plus), the immersed part in the opposite sense (minus). For the zinc plate applies the opposite. The two rods of the battery can be imagined as two fans. The one that is blowing outside the liquid (positive electrode = graphite), it is suctioning inside the liquid; the one that is suctioning outside the liquid (negative electrode = zinc), it is blowing inside it. When the electrodes are connected with a metal wire, a closed flux is created.
And look now: if we open a "dead" carbon-zinc AA battery, we will see that the zinc jar is completely dissolved, while the carbon rod in the middle is quite good. Why so? Because the part of the zinc jar which is in contact with the acidic solution behaves as positive and the movement is always from the positive to the negative.

I have recently found an evidence that also Franklin, contrary to the claims of many people, didn't assign the positive sign to the vitreous and the negative sign to the resinous electricity completely randomly. Here is a quotation from the book "THEORIES OF AETHER AND ELECTRICITY - FROM THE AGE OF DESCARTES TO THE CLOSE OF THE NINETEENTH CENTURY" from E.T.Whittaker (1910) https://en.wikipedia.org/wiki/E._T._Whittaker

"Some curiosity will naturally be felt as to the considerations which induced Franklin to attribute the positive character to vitreous rather than to resinous electricity. They seem to have been founded on a comparison of the brush discharges from conductors charged with the two electricities; when the electricity was resinous, the discharge was observed to spread over the surface of the opposite conductor "as if it flowed from it." Again, if a Leyden jar whose inner coating is electrified vitreously is discharged silently by a conductor, of whose pointed ends one is near the knob and the other near the outer coating, the point which is near the knob is seen in the dark to be illuminated with a star or globule, while the point which is near the outer coating is illuminated with a pencil of rays; which suggested to Franklin that the electric fluid, going from the inside to the outside of the jar, enters at the former point and issues from the latter. And yet again, in some cases the flame of a wax taper is blown away from a brass ball which is discharging vitreous electricity, and towards one which is discharging resinous electricity. But Franklin remarks that the interpretation of these observations is somewhat conjectural, and that whether vitreous or resinous electricity is the actual electric fluid is not certainly known." (pages 44-45)

The bolding of the text stems from me. As I found in the dictionary, a "wax taper" means a candle. Therefore, the flame of the candle is blown away from a vitreously electrified object; however, it is blown towards a resinously electrified one.

Franklin's remark that his interpretation of the observations is somewhat conjectural can only mean that he was not completely sure and wanted even more experimental evidence.

The only “evidence” of the contemporary physics, that the electricity flows from the negative to the positive, is the cathode ray tube. I will post soon an article about it.