THE FLEMING'S LEFT HAND RULE IS NOT VALID!

Forums: Left Hand Rule, Science, Physics, Magnetism, Electromagnetism
Email this Topic • Print this Page
Reply Mon 12 Jul, 2021 05:07 am
Let us consider some experiments. We place a stiff copper wire on a table. Parts of its length don’t touch the table. Above a wire section that does not touch the table we hold a strong cylindrical magnet with its plus-pole down (N-pole), so that the wire lies exactly under the middle of the magnet. Then we connect a new battery to the ends of the wire so that the plus-pole is closer to us and the minus-pole further away from us. At the moment of connection we will notice that the wire makes a strong deflection to the left and up. As soon as we turn the magnet over and repeat the same, the wire will make a strong deflection to the right and up. If we hold the magnet again with the positive pole down, now not directly over the wire, but left over it, however still close to it, we will notice that the wire after connecting to the battery makes a jerky movement to the right and down. How is this explained? In the first variant, the permanent magnet “blows” down; the magnetic wind in and around the wire blows clockwise spirally from the plus to the minus-pole of the battery; it blows down on the right of the wire, up on the left of it; on the right of the wire both magnetic winds coincide (the effect intensifies), and on the left of the wire they collide (the effect weakens); the wire moves to where the effect only intensifies, namely to the maximum, and that is to the left and up. In the third variant, in which both winds only collide, the wire deflects to where the adverse effect is maximally attenuated or quite ceased, namely to the right and down.

What will happen if we place a second identical magnet below the first? The upper magnet will pull the conductor to the left and up, while the lower magnet to the left and down. The resultant force will be to the left, perpendicular to the magnetic lines of force (figure below). 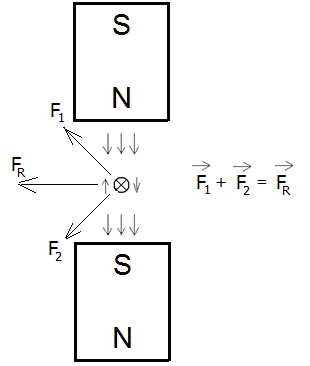 But this applies only if the conductor is placed exactly in the middle between the magnets and if the magnetic field is uniform. What is a uniform magnetic field? Please look at the drawing below (figure a): 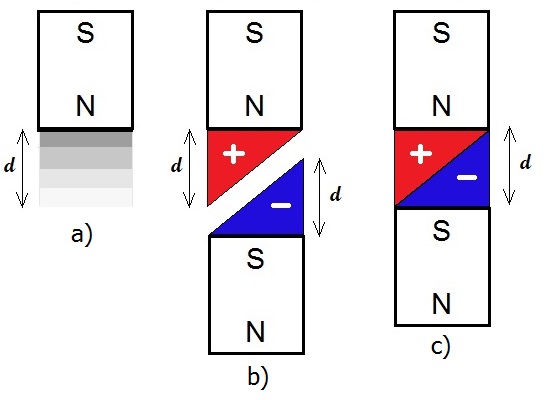 The magnetic field is uniform in terms of strength, but it is not homogeneous in terms of polarity. The Plus and the Minus retain their character just as before the bringing of the magnets close to each other.

Consider also whether this formula about the so-called Lorentz force is true:
F = qE + qv x B
since it is a consequence of the Fleming's left hand rule.