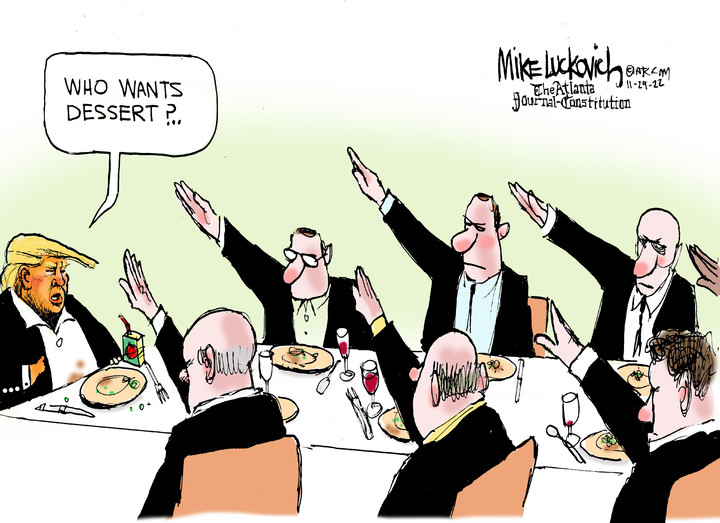 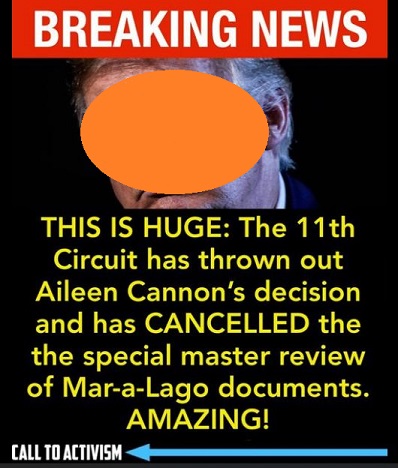 Trump has opposed the extension, seemingly demanding the special master process continue as if nothing has changed.

"In her frustration at not winning the Arizona governorship even though she is a privileged white woman, MAGA cultist Kari Lake hired a team of lawyers in an attempt to distort reality enough to put her in office. To make her wish come true, the webcam filter aficionado hired disgraced lawyer Alan Dershowitz to blast bloviating objections through the court system, but a federal judge sanctioned the perpetually aggrieved Trump-sycophant, saying that claims that the election was rigged were "false, misleading, and unsupported."

With the lawsuit dismissed, the judge addressed a request for sanctions on Thursdsay, Dec. 1. In a 30-page order, he wrote as follows:

The Court concludes that sanctions are warranted under Rule 11 and 28 U.S.C. § 1927. It finds that Plaintiffs made false, misleading, and unsupported factual assertions in their FAC and MPI and that their claims for relief did not have an adequate factual or legal basis grounded in a reasonable pre-filing inquiry, in violation of Rules 11(b)(2) and (b)(3). The Court further finds that Plaintiffs' counsel acted at least recklessly in unreasonably and vexatiously multiplying the proceedings by seeking a preliminary injunction based on Plaintiffs' frivolous claims, in violation of Section 1927."


Former President Donald Trump called Saturday for the “termination” of articles of the Constitution following the “Twitter files” leak of a series of messages between the social media platform’s leaders in the run-up to the 2020 presidential election.

Trump suggested that the contents of the leak warranted a complete election re-do or simply a coup in which he would be installed as president.

“A Massive Fraud of this type and magnitude allows for the termination of all rules, regulations, and articles, even those found in the Constitution,” Trump wrote on Truth Social, the platform he started after being kicked off Twitter early 2021.

On Friday evening, author Matt Taibbi posted a thread of dozens of tweets that he titled “THE TWITTER FILES,” alleging that his story offered bombshell revelations about free speech on Twitter. Some conservatives claim Taibbi’s tweets prove that Twitter improperly influenced the result of the last presidential election, although the story has been panned as overhyped and misleading.

The purportedly leaked messages discussed content moderation decisions ― specifically, how Twitter would handle the New York Post story about the sordid contents of a laptop reportedly belonging to Hunter Biden. The laptop’s contents ranged from explicit photographs of Joe Biden’s son and his romantic partners to emails about his work advising Burisma, the Ukrainian energy company.

At the time, many intelligence experts thought the story’s provenance was highly suspect, given the threat of foreign disinformation in the weeks leading up to a monumental election. A group of more than 50 former intelligence officials signed an open letter stating that the laptop story “has all the classic earmarks of a Russian information operation.” Tech companies that were excoriated for allowing disinformation to flow freely on major social platforms during the 2016 presidential campaign were not keen to make the same mistakes.

Since then, at least some of the information from the laptop has been authenticated by news outlets that are not owned by right-wing billionaire Rupert Murdoch.

But in all the uncertainty of late 2020, Twitter went to relatively extreme lengths to deal with the laptop story: The platform blocked it. Sharing a link to the New York Post story meant your account could be locked until you deleted it, which is what happened to then-White House Press Secretary Kayleigh McEnany.

This brings us back to the “Twitter Files” leak.

Twitter’s new overlord, the billionaire Elon Musk, had teased and hyped the thread with popcorn emojis in the hours before, writing, “This will be awesome.”

Taibbi claimed he had been given access to “thousands of internal documents obtained by sources at Twitter.” In what he promised would be the first in a series of installments to “The Twitter Files,” Taibbi shared screenshots of conversations that high-level Twitter executives supposedly had.

The company’s leaders settled on saying that the New York Post story violated its rules against hacked materials, although later, they reversed this decision. One email purportedly showed how Twitter executives heard from Rep. Ro Khanna (D-Calif.), who said suppressing the Post story had angered lawmakers on both sides of the aisle and was not in line with First Amendment principles.

Some conservatives reacted with particular outrage at another point in Taibbi’s thread, where he shared what appeared to be a request from someone on Joe Biden’s team. At the time, Biden was still just a presidential candidate, and someone had asked Twitter to remove several tweets. While some reacted as if this amounted to collusion, the tweets in question contained nude photos of the president’s son taken from his laptop.

The entire “Twitter Files” saga does seem to make one point clear: The complicated necessity of content moderation on major internet platforms.

Donald Trump has returned to the news cycle amid a deluge of stories about a dinner meeting he hosted with a white supremacist and Ye, the rapper previously known as Kanye West.

It’s a reminder of the chaotic years of his presidency, as well as a foreboding ― though hopefully instructive ― warning about how he would wield power if elected again.

If past is prologue, let’s take a moment to remember just how unsettling things got during the Trump administration, with this not-even-remotely-exhaustive list of weird and bad stuff he attempted while in office:

Tried to buy Greenland.
Wanted to nuke hurricanes.
Doctored a hurricane forecast map with a Sharpie.
Attempted a coup to stay in power.
Absconded with thousands of classified documents, lied about it and refused to give them back when the feds asked nicely.
Sent unidentified federal officers to Portland, Oregon, to abduct protesters and spark a conflagration that could be used as a pretense for implementing martial law.
Ordered peaceful protesters tear-gassed so he could pose for a photo-op with a Bible outside a church.
Tried to blackmail Ukraine into manufacturing dirt for his 2020 campaign.
Asked Russia for help in his 2016 campaign — and got it.
Had a weird affinity for Russian President Vladimir Putin. (Remember the Helsinki summit?)
Invited Russian Foreign Minister Sergey Lavrov to an in-person meeting in the Oval Office, where he accidentally revealed top-secret intelligence.
Wanted to withdraw the U.S. from NATO.
Separated migrant parents from their children, locked the kids in cages and then failed to reunite them.
Insisted that “raking” would prevent forest fires because “you’ve got to take care of the floors. You know the floors of the forest, very important.”
Covered for Saudi Arabia after Crown Prince Mohammed bin Salman ordered the gruesome murder and dismemberment of a U.S. journalist with a bone saw. (Jared Kushner, Trump’s son-in-law, owes Saudi Arabia $2 billion, and the crown prince has reportedly bragged about having Kushner “in his pocket.”)
Intervened to get Kushner top-secret clearance after he was denied over concerns about foreign influence.
Put Kushner in charge of Middle East peace.
Embraced rampant nepotism.
Touted injecting disinfectant as a COVID-19 cure.
Touted ultraviolet light as a COVID-19 cure.
Touted hydroxychloroquine as a COVID-19 cure.
Touted ivermectin as a COVID-19 cure.
Told people not to wear face masks to cut down the spread of COVID-19, even though they work.
Actively discouraged COVID-19 testing.
Refused to send federal aid to New York City amid the first COVID-19 wave because the virus was hitting Democratic-voting states hardest.
“Jokingly” said on multiple occasions that he deserved to be president for more than two terms.
Thought climate change was a Chinese hoax.
Built an incomplete border wall that doesn’t work, wasn’t needed and wasn’t paid for by Mexico.
Started a trade war with China that mainly hurt U.S. consumers.
Threw food when angry.
Saw no problem with his vice president potentially being hanged by a violent mob he’d summoned and sent to the U.S. Capitol to disrupt the peaceful transition of power.
Stared directly at the sun.
Started his presidency with an easily disproved lie about the crowd size at his inauguration.
Thought people needed an ID to buy cereal.
Fired James Comey as FBI director because he didn’t like the bureau investigating Russian meddling in the 2016 election. (Later, it was revealed that Trump’s campaign manager gave detailed internal polling data to a Russian intelligence agent.)
Was a “******* moron,” according to Rex Tillerson, his secretary of state.
Fired the Centers for Disease Control and Prevention’s China-based pandemic response team — and then when a pandemic happened years later, said, “I don’t take responsibility at all” for COVID-19.
Repeatedly embraced racism.
Thought repeating “person, woman, man, camera, TV” would assure Americans of his mental stability.
Tweeted literal gibberish — a lot.
Lied all the time. (And still does.)
Openly embraced and amplified QAnon conspiracy theories.
Got impeached twice.
Passed huge tax cuts for wealthy corporations ― and massively grew the national debt.
Flip-flopped on whether the White House had ordered the USS John McCain be hidden so he wouldn’t get mad. (It did.)
Called American military members who died in the line of duty “losers” and “suckers.”
Claimed to have bone spurs to get out of military service.
Binge-watched Fox News when he should have been working.
Played so, so much golf.
Raked in cash from foreign interests at his Washington hotel in an operation sometimes described as the “epicenter” of a corrupt presidency.
Held a rally that may have led to the death of Herman Cain.
Allegedly directed his lawyer to commit campaign fraud to cover up that Trump cheated on his wife after she had recently given birth.
Was accused of sexual misconduct by more than two dozen women.
Dismissed any bad news about himself as “fake.”
Lied about voluntarily turning over his tax returns.
Ate well-done steak — with ketchup.
Described white supremacists in Charlottesville, Virginia, as “very fine people.”
Grossly abused the presidential pardon on his way out the door.
Used private communication services extensively after arguing that Hillary Clinton should be jailed for having a private email server.
Refused to release White House visitor logs.
Went to Puerto Rico and threw paper towels at people desperate for actual hurricane aid.
Discouraged exercise because he believes bodies are like batteries, with a finite amount of energy.