Trump pardons Susan B. Anthony for crime of voting as a woman

President Donald Trump on Tuesday signed a pardon for women’s suffrage icon Susan B. Anthony, who was arrested in 1872 for casting a ballot when women could not vote.

Trump announced the pardon at a White House event commemorating the 100th anniversary of the ratification of the 19th Amendment.

“She was never pardoned,” Trump said, turning to speak directly to female leaders gathered behind him. “What took so long?”

she voted for the first time in Rochester, N.Y.

Anthony was arrested, found guilty by an all-male jury and ordered to pay a fine of $100 for violating the law. The voting rights activist never paid her fine.

“She was guilty for voting. And we are going to be signing a full and complete pardon. And I think that’s really fantastic,” Trump said. “She deserves it.”

When women won the right to vote in 1920 after the ratification of the 19th Amendment, Anthony had been dead for over a decade. But her crucial contributions to the early days of the suffrage movement are hailed with paving the way for the expansion of the right to vote.


Trump is a champion of womens rights.

Trump pardoned Susan B Anthony... and then launched a nasty attack on Michelle Obama for expressing her opinion.

(It's a general rule, if you are using Woman's rights as a political stunt, you might want to hold off on attacking women for at least a little while.) 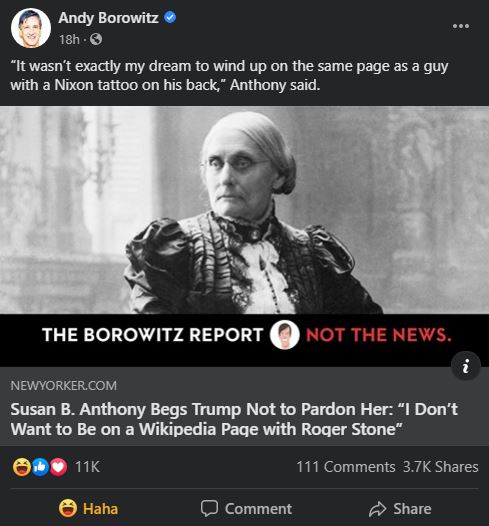 It has been proven that Michelle Obama is a man.

It sure seems that way!
0 Replies