Large numbers of streets and roads are closed.

all the areas surrounding Aldgate East have been cordoned off

Gautam, were you in the City?!

And on Blairs statement:

Tony Blair has talked on many occasions about what keeps him awake at night. And it seems that his worst nightmare is now happening. In his statement he was very calm and determined, saying he was going to return to London. He wants to speak to the people who have suffered, and actually try and get to grips with the situation.

There are well established procedures in place. Which is why we're seeing all these emergency procedures being put in place, such as transport being shut down. They have been preparing for this.

The first confirmation that these are being treated as terrorist attacks and the prime minister is sending two messages - firstly of course of sympathy for the victims, and secondly a message of defiance to the terrorists.

The visible evidence is that he will return to London in a couple of hours to be briefed by senior officers and then return to the G8 summit later to carry on. All leaders seem to have decided not to give the terrorists what they were looking for - the cancellation of the summit.

1205 Prime Minister Tony Blair, at the G8 summit in Gleneagles, says there has been "a series of terrorist attacks in London... people have died and are seriously injured... It is reasonably clear this is designed and timed to coincide with the opening of the G8". He says he will return to London within hours, but that the summit will continue without him

1126 The president of the European Parliament, Josep Borrell, blames terrorism for a "coordinated series of attacks" and "confirmed deaths"

1118 London's Metropolitan Police Commissioner Sir Ian Blair tells the BBC he knows of "about six explosions", one on a bus and the others related to Underground stations. He says he believes the six affected areas are Edgware Road, King's Cross, Liverpool Street, Russell Square, Aldgate East and Moorgate, but says it is "still a confusing situation". He advises Londoners to "stay where you are - all of London's transport is currently disabled" - he refuses to confirm any fatalities

The Israeli ambassador to Britain in London?
told by which govt?
0 Replies
1
Reply Thu 7 Jul, 2005 05:34 am
British police told the Israeli Embassy in London minutes before Thursday's explosions that they had received warnings of possible terror attacks in the city, a senior Israeli official said. The official spoke on condition of anonymity because of the nature of his position.

Foreign Minister Silvan Shalom said he wasn't aware of any Israeli casualties. Just before the blasts, Scotland Yard called the security officer at the Israeli Embassy and said warnings of possible attacks had been received, the official said. He did not say whether British police made any link to the economic conference.

The Israeli ambassador to London, Zvi Hefetz, said Thursday that the embassy was in a state of emergency following the explosions in London, with no one allowed entering or leaving. Danny Biran, an Israeli Foreign Ministry official, said all phone lines to the embassy were down. The ministry has set up a situation room to deal with hundreds of phone calls from concerned relatives.

Thousands of Israelis are living in London or visiting the city at this time, Biran said. Amir Gilad, a Netanyahu aide, told Israel Radio that Netanyahu's entourage was receiving updates all morning from British security officials, and ``we have also asked to change our plans.'' Netanyahu had been scheduled to stay in London until Sunday, but that could change, Gilad said.

Source
0 Replies
1
Reply Thu 7 Jul, 2005 05:35 am
Well, Steve, that's the problem, my ISP uses the AP service, but they update the articles regularly, and when i went back for a quote, the article had been changed. They don't archive the stuff there. I'll go to the AP site and see if i can find something.
0 Replies
1
Reply Thu 7 Jul, 2005 05:37 am
This is the single statement which i read, and which i have just found at the Associated Press website:

A senior Israeli official said Scotland Yard told Israel minutes before the explosions that it had received warnings of possible terror attacks.

Witnesses saw the top was ripped off a double-decker bus near Russell Square close to King's Cross train terminal and the twisted wreckage of another in Tavistock Square nearby.

London's police chief Ian Blair said there were indications of explosives at one of the blast sites.

"We are aware that one of the sites certainly does contain indications of explosives," he told Sky Television

I tried searching the BBC News website, which was down at the time, so I could only get information from American sources, which just weren't good enough.

Then I figured out that two of the stations mentioned weren't even on the Metropolitan Line, so a power surge probably wouldn't have affected them. Then when I heard there was an explosion on a bus, I should have known it was a terrorist attack.

The timing was perfect.

Opening of G8. Police at G8 to help with security issues.

Any attack on London would overstretch the current number of police in the city at the time. The attack happened at rush hour in a jam packed tube station. People were evacuated, many started taking the bus. Then the terrorists hit them overground with bus bombings, killing those that may have fled the tube.

They were like evil shepherds, herding the people from one disaster to then bomb then again.

I just cannot get over how well planned out it was.

Though nothing compared to the evil, disgustingly twisted genius of 9/11, it still has its clever nuances that are simultaneously clever and disgusting and vile and stupid.

I expect the death toll to be higher than two, especially where the bus bombing was concerned; the entire top deck was totalled. In fact, the top deck doesn't exist anymore.

To these terrorists, all I can say is that your bombing won't affect us. Our capital has been bombed several times before and not once did we flinch. Even when our city was being constantly bombed during WWII, our country did not surrender.

These attacks are a waste of explosives, a waste of money and a waste of lives, because it won't do anything.

Just ask those IRA Bombers, Al Qaeda. Just ask them what they did and what results they got in the end. Nothing and you, Al Qaeda, will also achieve nothing. Look what the Nazis did. Look how many bombs they dropped on London. What did that do, huh?

On one hand the attacks were cleverly perpetrated. On the other hand, they're stupid, because past history shows that these kinds of attacks don't work.
0 Replies
1
Reply Thu 7 Jul, 2005 05:52 am
nimh wrote:

So was it one or two buses, apart from the six tube blasts? This one says two:

Witnesses saw the top was ripped off a double-decker bus near Russell Square close to King's Cross train terminal and the twisted wreckage of another in Tavistock Square nearby.

London's police chief Ian Blair said there were indications of explosives at one of the blast sites.

"We are aware that one of the sites certainly does contain indications of explosives," he told Sky Television

As I see it, only one has been confirmed and that's this one: 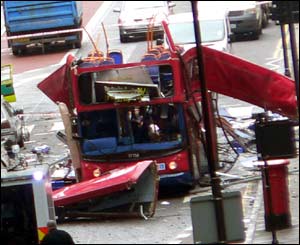 Oh... that's a much bigger version of the picture I last saw. Seems as if the floor of the top deck is still there and the seats look pretty uncharred. Still, the buses were jam packed at the time (because of the blasts in the Underground) so it's not really surprising there's dozens of fatalities.
0 Replies
1
Reply Thu 7 Jul, 2005 05:52 am
BBC now talking about dozens of fatalities

A previously unknown group claimed responsibility in the name of al Qaeda for a series of blasts in London that killed at least two people and wounded 185, the Italian news agency ANSA reported on Thursday. The "Secret Group of al Qaeda's Jihad in Europe" claimed the attack in a Web site posting and warned Italy and Denmark to withdraw their troops from Iraq and Afghanistan, ANSA said. The claim could not be verified and did not appear on any of the Web sites normally used by al Qaeda


(Source)
0 Replies
1
Reply Thu 7 Jul, 2005 05:58 am
I'm in central London right now. I'm OK but there's a very strange atmosphere - no buses on the roads, lots of messages to check if friends and family are OK - made more difficult by the mobile phone networks pulling some services.

The terrorists won't win. We've endured much in the history of this country and we won't give in now.

he's ok but can't get home

so trains were running after bombs were going off...
0 Replies