Forums: Video Games, Comics, Society, Culture, Pop Culture
Email this Topic • Print this Page
Reply Wed 27 May, 2020 09:27 pm
Hi. I am curious about this. Since the '70s at least, or maybe even earlier than that, a lot of entertainment has been produced centered around street gangs and/or street fighters.

In the '70s there was a movie called The Warriors.

Between the '80s and '90s there were a bunch of fighting video games and what they called "beat 'em ups" that came out - Double Dragon, the Street Fighter and Mortal Kombat series, The King of Fighters series, Rival Schools, the Tekken series, and Rival Schools, just to name a few.

There are/were some comics that cane out centered around street gangs and street fighters, like the Street Fighter and Mortal Kombat comics.

There were live-action films based on fighting games and "beat em ups" like the Street Fighter and Mortal Kombat films from the '90s.

Is such entertainment still popular? A few people I know have said no.

I've only listed examples of pieces of entertainment that I know of off-hand.

I know I said I originally wanted to produce a cartoon/comics series about street gangs and street fighters.

In general, superhero and sci-fi/fantasy genres have grown in popularity in recent years.

Mortal Kombat has been moving towards fantasy and sci-fi in recent years. The most recent game used time travel as part of the main story.

The recent show/film that heavily features fight scenes was Netflix's Daredevil series, and that is a superhero series.

Why has entertainment centered around street gangs and street fighters stopped being popular? Is it because of political correctness and the FCC?
1 Reply
1
Reply Thu 28 May, 2020 05:47 am
@JGoldman10,
The violent nature of some real life gangs may have led to a decline in popularity of street gangs in fiction.

Plus, not everything can stay popular forever. The fantasy genre and superhero films reached higher levels of popularity in the early 2000s, with the success of the Harry Potter films and the Spider-Man films.
2 Replies
0
Reply Thu 28 May, 2020 05:56 am
@Rebelofnj,
With advents in filmmaking tech since the year 2000 it makes sense for superhero and sci-fi movies to be popular now.

A lot of comic book movies couldn't be made before because of tech restraints, but are being made now.

Indeed. Here are the actors for Spider-Man, War Machine, and the Hulk in their costumes, in the set of Marvel's Avengers: Endgame. 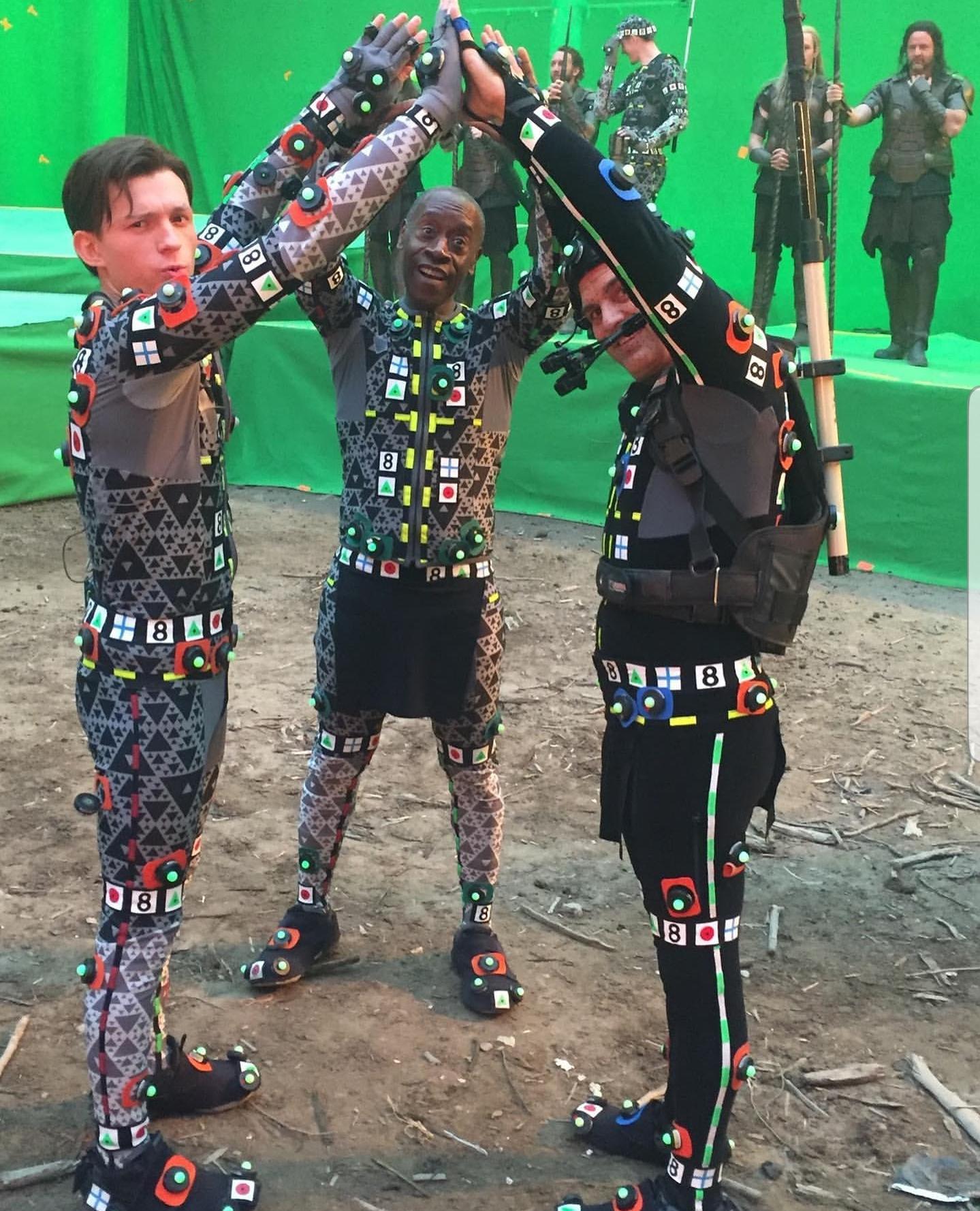 I don’t know if that really was the case or if it was exaggerated by Hollywood.

In any event films like Warriors, Assault on Precinct 13 and Fort Apache the Bronx gave the impression of law and order struggling and failing to reign in a bunch of very violent criminals. The film Joker hearkens back to that era.

I know that successive mayors have enacted crime prevention policies that have made New York a much safer place so there aren’t so many visible gangs roaming about.

It’s not the issue it once was.
0 Replies
0
Reply Thu 28 May, 2020 06:25 am
@Rebelofnj,
The Watchmen film wasn't made for several years because of tech restraints.
1 Reply
1
Reply Thu 28 May, 2020 06:43 am
@JGoldman10,
Not really. There were early attempts to produce the film since the 80s. Sam Hamm (screenwriter of 1989 Batman) had written a draft of the film, after original writer Alan Moore declined to produce a screenplay.
https://en.wikipedia.org/wiki/Production_of_Watchmen_(film)

The film could have been produced much before 2009 with the technology available. There is nothing in the original story that cannot be filmed using 80s era filming techniques. With Dr. Manhattan, they can use blue body paint, whereas the 2009 film used a mocap suit with LED lights.
1 Reply
1
Reply Thu 28 May, 2020 01:25 pm
@JGoldman10,
Quote:

Between the '80s and '90s there were a bunch of fighting video games and what they called "beat 'em ups" that came out - Double Dragon, the Street Fighter and Mortal Kombat series, The King of Fighters series, Rival Schools, the Tekken series, and Rival Schools, just to name a few.

"Beat 'em ups" haven't been popular in years. The genre as a whole was essentially replaced by "hack & slash" games, where players fights waves of enemies with bladed weapons. Most hack & slash games lean towards fantasy and historical fiction to justify the use of swords and axes in modern games.

There was a new Streets of Rage game that was released last month. It got good reviews, but I don't think it was a major seller.

1 Reply
0
Reply Thu 28 May, 2020 09:34 pm
@Rebelofnj,
Trying to animate the blots in Rorschach's mask without using CGI would have been very strenuous and tedious.
0 Replies
0
Reply Thu 28 May, 2020 09:41 pm
I never watched Watchmen all the way through. I only saw part of it and I was offended by it. There was some scene I watched in which Gospel music was inappropriately being played in the background. That was one of the most sacrilegious things I've ever seen in any movie.
1 Reply
0
Reply Fri 29 May, 2020 01:07 am
@Rebelofnj,
Besides The Warriors, what films about street fighters, street gangs and gangs in general have been popular?

There are a lot of films about gangs according to:

There are a lot of movies about street fighting and fighting in general. I remember the American Ninja movies as corny as they were. I didn't care too much for Fight Club.

Correct me if I am wrong but why is Dragonball still so popular? It seems very popular going by what I've seen on YouTube. There is a lot of fan-made DB stuff on there.
2 Replies
1
Reply Fri 29 May, 2020 01:12 am
@JGoldman10,
JGoldman10 wrote:

Correct me if I am wrong but why is Dragonball still so popular?

It's a good term to describe problem nads. As in, "Prince Andrew caught crabs off an underage prostitute and now his bollocks are all dragonballzy."
1 Reply
0
Reply Fri 29 May, 2020 01:45 am
@Rebelofnj,
How popular are the Street Fighter and Mortal Kombat comics that are still being produced?
0 Replies
1
Reply Fri 29 May, 2020 03:45 am
@JGoldman10,
It is weird you even watched the film at all, as Dr. Manhattan has been described as a god multiple times in the film (one scientist said "there is a God, and he's American"). Plus, all of the other violent scenes that happened before the Hallelujah scene.

Speaking of that scene, the director specifically chose that song to make the scene more uncomfortable.
1 Reply
1
Reply Fri 29 May, 2020 04:03 am
@JGoldman10,
I can't think of any recent popular films with gangs. None of the films on that Wikipedia article between 2000 and 2019 are not popular at all. I never even heard of most of them.

The one known film in that article, 2019's Uncut Gems, doesn't have street fighters. It is about a morally corrupt jewelry seller trying to pay off his gambling debts.

Fight Club was not really all about street fighting; it was about becoming anarchists and a man dealing with inner demons.

Dragon Ball recently had a revival series called Dragon Ball Super, which was popular among new and old fans.

As for the Street Fighter and Mortal Kombat comics, none of them were ever popular. They were treated as inferior video game tie-ins.

The most recent popular media with gangs are the games Saints Row and Grand Theft Auto. However, Saints Row's popularity is owed to the outrageous, over the top gameplay and story, while Grand Theft Auto is popular for the characters and the diverse gameplay.
2 Replies
0
Reply Fri 29 May, 2020 09:53 pm
@Rebelofnj,
Then Watchmen is one of the most blasphemous movies I have ever seen as well. I think I recall that scene you are referring to in which a scientist made that quote.

I watched part of the movie out of curiosity. I wanted to know what all the hype surrounding the film was about.
0 Replies
0
Reply Fri 29 May, 2020 09:58 pm
@Rebelofnj,
Rebelofnj wrote:

I can't think of any recent popular films with gangs. None of the films on that Wikipedia article between 2000 and 2019 are popular at all. I never even heard of most of them.

The earliest example of a gang movie I can think of is a film called Streets of New York, which came out in 1939.

Gangs of New York, which starred Leonardo DiCaprio and came out in '02 wasn't popular?
1 Reply
0
Reply Fri 29 May, 2020 10:12 pm
@Rebelofnj,
How popular were the Def Jam games? I recall watching a review for Def Jam: Fight For NY a couple of years back on X-Play on G4TV.
0 Replies