What happened to that? As far as I know there hasn't been a Disney animated film based on some established piece of fiction since 2013, after Frozen came out. Frozen is based on The Snow Queen by Hans Christian Andersen.

I know once in a while they will produce an animated film based on an original concept.

Why is Disney making live-action remakes of their classic animated films?

Are they running out of ideas for original movies?

Disney recently announced a new original animated film, Raya and the Past Dragon, set for a November 2020 release.
https://deadline.com/2019/08/raya-and-the-last-dragon-awkwafina-cassie-steele-cast-disney-1202703605/

There is also Pixar's upcoming original films, Onward and Soul, both for 2020.

As for Disney remaking their own animated films, they are capitalizing on audience's nostalgia. It has proven to be successful, as the last two films, Aladdin and The Lion King, each made over a billion dollars.

They are releasing a Lady and The Tramp remake on their Disney Plus service next month, as well as a 101 Dalmatians prequel about Cruella De Vil.

I think Disney should make or should have made animated films about Don Quixote and Gulliver's Travels.

I wonder why they never made an animated film based on Animal Farm.

Some are good in their own right (The Jungle Book, Cinderella), some were just OK (Aladdin, Lion King, Beauty and the Beast), and the others are poor (Maleficent, Alice in Wonderland).

Then there's Disney's TV series Once Upon A Time, which is heavily based on their Fairy Tale films. One of their seasons was a live action follow up to Frozen.
0 Replies
1
Reply Tue 1 Oct, 2019 09:01 pm
@JGoldman10,
They haven't done a short based on an existing story since their 2006 short The Little Match Girl.

Their shorts since then were either original stories or follow ups to their animated films (Frozen Fever, Tangled Ever After). Same with Pixar's shorts.

0 Replies
1
Reply Wed 2 Oct, 2019 01:07 am
@JGoldman10,
Have you read Gulliver's travels? Gulliver is sentenced to death in Lilliput for putting out a fire that was burning the royal palace? He put the fire out by pissing on it and they argued he was just looking for an excuse to piss on the palace any way.

What about the war between the bigenders and littleenders, how do you think Disney could handle that?

Don Quixote's examination of madness and a rejection of reality all tied up with The Spanish Inquisition should prove quite a heady mix for kids.

Animal Farm was made years ago, funded by the CIA. 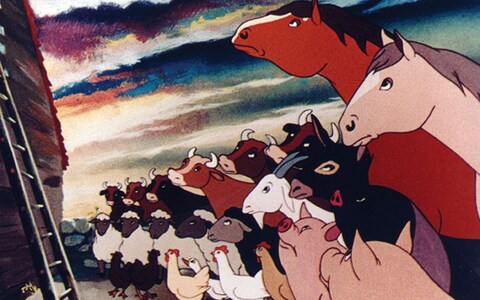 It's available on youtube.
1 Reply
1
Reply Wed 2 Oct, 2019 01:11 am
There's lots of kid's stuff not even looked at. Little Grey Men by BB. Tom's Midnight Garden, The Secret Garden, Ivanhoe, Gawain and the Green Knight.

Swift had a deeply pessimistic view of humanity. The last voyage takes Gulliver to a land ruled by intelligent horses, who have to deal with the bestial yahoos. Eventually Gulliver is kicked out of there because they just can't stand him. On his return he spends all his time in the stables because people disgust him.

A Modest Proposal is an essay advocating cannibalism.

I had not got far, when I met one of these creatures full in my way, and coming up directly to me. The ugly monster, when he saw me, distorted several ways, every feature of his visage, and stared, as at an object he had never seen before; then approaching nearer, lifted up his fore-paw, whether out of curiosity or mischief I could not tell; but I drew my hanger, and gave him a good blow with the flat side of it, for I durst not strike with the edge, fearing the inhabitants might be provoked against me, if they should come to know that I had killed or maimed any of their cattle. When the beast felt the smart, he drew back, and roared so loud, that a herd of at least forty came flocking about me from the next field, howling and making odious faces; but I ran to the body of a tree, and leaning my back against it, kept them off by waving my hanger. Several of this cursed brood, getting hold of the branches behind, leaped up into the tree, whence they began to discharge their excrements on my head; however, I escaped pretty well by sticking close to the stem of the tree, but was almost stifled with the filth, which fell about me on every side.
0 Replies
0
Reply Wed 2 Oct, 2019 02:20 pm
@JGoldman10,
JGoldman10 wrote:

I remember the animated Gulliver's Travels movie from the '30s:


FIXED.
0 Replies
1
Reply Wed 2 Oct, 2019 02:21 pm
@izzythepush,
A Modest Proposal was a humorous essay Swift wrote about how to control the Irish population. I remember my dad telling me about it.
1 Reply
1
Reply Wed 2 Oct, 2019 03:21 pm
@JGoldman10,
I think they haven't made films based on those stories because those have already been made into classic animated films by other studios.

Except for Don Quixote. Disney is already planning a live action adaptation of the book.
https://www.hollywoodreporter.com/heat-vision/don-quixote-movie-works-at-938175

In addition to that, director Terry Gilliam has been trying for decades to produce a Don Quixote film, only to be stopped by production disasters: flooding of the sets, loss of budget, cancer, etc. He finally made the film in 2018.
https://en.wikipedia.org/wiki/The_Man_Who_Killed_Don_Quixote
0 Replies
1
Reply Wed 2 Oct, 2019 04:10 pm
@JGoldman10,
None of that changes anything I've said about it.
0 Replies
1
Reply Wed 2 Oct, 2019 07:31 pm
I used to wonder why Disney never made an animated Wizard of Oz movie.

They could have made a feature-length animated film out of Puss in Boots.

Disney could have made an animated Joan of Arc movie but I think a lot of people would have been offended by that.
1 Reply