What's your problem? It's important to know how widely a population has been infected in order to get a reality-based concept of the problem.

The stress of the fear-factor of a bullshit driven agenda will do far more damage to the psyche than the rest of your propaganda-based assumptions.

What the hell are you even talking about? What "fear-factor"? Whose "psyche"? What "propaganda-based assumptions"?

You need some updates to your data base, son, and they're not coming from the media.

I'm not relying on a "data base", I'm trying to show you that the count isn't "flawed". If people interpret the studies incorrectly they should be made aware of their errors.

It's important to know how widely a population has been infected in order to get a reality-based concept of the problem.

So, you're backing the "let's test everyone, just in case" scenario?

What the hell are you even talking about?

If you've had even first-year psyche education, you'd not be in the dark so much, hombre.

So, you're backing the "let's test everyone, just in case" scenario?

I'm not "backing" anything, I simply disagree that the data is "useless".

Death certificates can be signed by a physician who was responsible for a patient who died in a hospital, which accounts for many COVID-19 deaths. They can also be signed by medical examiners or coroners, who are independent officials who work for individual counties or cities. Many COVID-19 death certificates are being handled by physicians unless the death occurred outside of the hospital, in which case a medical examiner or coroner would step in, said Dr. Sally Aiken, the president of the National Association of Medical Examiners (NAME). In some jurisdictions, including cities such as Chicago and Milwaukee, medical examiners are involved in determining the cause of death for every suspected COVID-19 case. In those jurisdictions, medical examiners review medical records even of patients who die in hospitals to ensure that the symptoms and any testing indicate that the patient did indeed die of COVID-19.

Having medical examiners confirm COVID-19 deaths can create more uniformity and clearer documentation, Aiken told Live Science. On a death certificate, there are spaces to list an immediate cause of death, as well as the chain of events that led to that final disease or incident. There are also spaces for adding contributing factors.

For COVID-19, the immediate cause of death might be listed as respiratory distress, with the second line reading “due to COVID-19.” Contributing factors such as heart disease, diabetes or high blood pressure would then be listed further down. This has led to some confusion by people arguing that the “real” cause of death was heart disease or diabetes, Aiken said, but that’s not the case.

“Without the COVID19 being the last straw or the thing that led to the chain of events that led to death, they probably wouldn’t have died,” she said.

If you've had even first-year psyche education...

Psychology is a part of any adult education, or medical, or human resources degree.

Psychology is a part of any adult education, or medical, or human resources degree.

Then why did you write "psyche education" instead of "a psychology course" or "scientific investigation of the psyche"? Why so cryptic? In any case, it's stupid to fear that warning people of danger might damage their fragile sense of security. Alerting people to things which could harm them is normally considered to be a sign of empathy and concern. Would you rather news about the coronavirus were censored?
1 Reply
0
Reply Thu 9 Jul, 2020 07:10 pm
@hightor,
Quote:

Would you rather news about the coronavirus were censored?

It's COVID-19, and depending on how you ingest it, the result is actually a form of SARS.

There's been no new cases of either in our state for weeks now, and only 106 deaths nationally in total. That's how it pans out, when deaths are correctly diagnosed, and reported.

Why are you stalking me on an Aussie thread?

Alerting people to things which could harm them is normally considered to be a sign of empathy and concern.

Openly conflating statistics to suit an agenda has sweet **** all to do with empathy and concern.


1 Reply
2
Reply Fri 10 Jul, 2020 06:43 am
@Builder,
Not to disagree with most of your points saying COVID is a form of SARS is like saying cats are of a form of hyenas, in that they are both mammals.

In January 2020, a novel coronavirus, SARS-CoV-2, was identified as the cause of an outbreak of viral pneumonia in Wuhan, China. The disease, later named coronavirus disease 2019 (COVID-19), subsequently spread globally. In the first three months after COVID-19 emerged nearly 1 million people were infected and 50,000 died.

The Centers for Disease Control and Prevention (CDC) developed a test to diagnose COVID-19 in respiratory and serum samples. NIAID also is accelerating efforts to develop additional diagnostic tests for COVID-19. These tests are helping facilitate preclinical studies and aid in the development of medical countermeasures.

As for initial testing, this is what's popped up on the radar yesterday.

The review concluded that the CDC faced “time pressure” to launch the kits and that lab procedures may have allowed contamination, according to The Hill. In addition, the kits weren’t checked despite “anomalies” during the manufacturing process.

The review does not seem to blame the CDC directly, according to The Washington Post. However, the findings likely mean that coronavirus numbers were skewed at the beginning of the pandemic.

Despite their similar name, there are several differences between the coronaviruses that cause COVID-19 and SARS."

Speaking of unmentionable scholarship, my reference to - and Tony's daughter won one too - was purely facetious. Although to be fair, as long as Tony didn't open his mouth and let you know his policies and beliefs I found him to be quite affable.
0 Replies
-3
Reply Sun 12 Jul, 2020 01:17 am
@hingehead,
Quote:

having a shared cladistic genetic heritage does not make them the same thing.

And yet, the industry that names these cats called it a SARS first, right?

It's not the name of the virus it's the name of the illness it causes - much like AIDS vs HIV. It was shorthand used to refer to to SARS-CoV particular coronavirus that spread around the world back in 2003. COVID-19 is the disease this time and is caused by the SARS-CoV2 virus.

COVID-19, which is caused by the new coronavirus, has been dominating the news lately. However, you may have first become familiar with the term coronavirus during the severe acute respiratory syndrome (SARS) outbreak in 2003.

Despite their similar name, there are several differences between the coronaviruses that cause COVID-19 and SARS. Keep reading as we explore coronaviruses and how they compare to each other.

Probably the last decent representative government we had.

Previously secret correspondence between the Queen and former Australian governor general Sir John Kerr surrounding the dismissal of Gough Whitlam will be released in full on Tuesday morning, Australia’s national archives has confirmed.

The decision will guarantee the public will be able to access the entirety of the so-called palace letters, a series of more than 200 exchanges between the Queen, her private secretary and Kerr, the then-governor general, in the lead-up to the 1975 dismissal of Whitlam, the then-Australian prime minister.

The National Archives of Australia has spent more than a month working through the documents following a momentous high court decision finding it was wrong for the archives to withhold the letters from historian Jenny Hocking.

Which exactly describes viral pneumonia, which is the most common result of covid-19. Not sure where you're going with this, but it's batshit boring, Hinge.

Severe acute respiratory syndrome coronavirus 2 (SARS-CoV-2)[2][3] is the strain of coronavirus that causes coronavirus disease 2019 (COVID-19), the respiratory illness responsible for the COVID-19 pandemic. Colloquially known as simply the coronavirus, it was previously referred to by its provisional name, 2019 novel coronavirus (2019-nCoV),[4][5][6][7] and has also been called human coronavirus 2019 (HCoV-19 or hCoV-19).[8][9][10][11] The World Health Organization declared the outbreak a Public Health Emergency of International Concern on 30 January 2020, and a pandemic on 11 March 2020.[12][13]
SARS-CoV-2 is a positive-sense single-stranded RNA virus[14] that is contagious in humans.[15] As described by the U.S. National Institutes of Health, it is the successor to SARS-CoV-1,[10][16] the strain that caused the 2002–2004 SARS outbreak.
Taxonomically, SARS-CoV-2 is a strain of severe acute respiratory syndrome–related coronavirus (SARSr-CoV).[2] It is believed to have zoonotic origins and has close genetic similarity to bat coronaviruses, suggesting it emerged from a bat-borne virus.[17][18][19][9] There is no evidence yet to link an intermediate animal reservoir, such as a pangolin, to its introduction to humans.[20][21] The virus shows little genetic diversity, indicating that the spillover event introducing SARS-CoV-2 to humans is likely to have occurred in late 2019.[22] On 3 July 2020, scientists reported finding that a major genetic risk factor for human infection with SARS-CoV-2 was inherited from archaic Neanderthals 60,000 years ago.[23][24]
Epidemiological studies estimate each infection results in 1.4 to 3.9 new ones when no members of the community are immune and no preventive measures taken. The virus primarily spreads between people through close contact and via respiratory droplets produced from coughs or sneezes.[25][26] It mainly enters human cells by binding to the receptor angiotensin converting enzyme 2 (ACE2).[17][27][28][29]
0 Replies
2
Reply Tue 18 Aug, 2020 04:21 pm 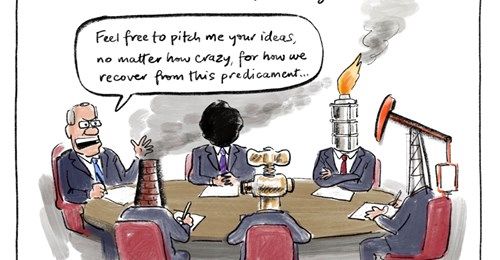 
Some real Australiana.
1 Reply
2
Reply Sat 17 Oct, 2020 06:14 am
@Builder,
Always pissed me off that they dubbed the american version of madmax because they thought no one could understand the aussies if they used the original soundtrack.
1 Reply
0
Reply Sat 17 Oct, 2020 06:45 pm
@MontereyJack,
Mel was already talking like an American, but yeah, not really necessary.

It may, if you’re cynical, look to be a trifle on the nose, a bit suss that someone who ScoMo is chummy with to the point of name-dropping him all of 12 years ago once he’d planted his flag in Castle Canberra, can find himself milking a defence cash cow to the tune of $43 million. Even more suss when one looks closer at this recent piece from The Guardian, and you see that the org upon which such legion of government largesse is bestowed, ServeGate Australia, has all the hallmarks of a front, a tax dodge, a money-laundering operation.

But that’s just on the surface, I’m sure if one were to look just a smidge deeper, one would have one’s mind put totally at ease. *cough*

Broader scrutiny seems unlikely, especially at a federal level. We’re no closer to a federal ICAC than we are to a cure for male pattern baldness, and with the ship of state running to such a degree that nobody in a majority among the mainstream media, business or defence contractors would object, the idea of deeper, more substantial exposure is as fanciful as actually peeling back and winning something more than a small order of fries when playing the McDonald’s Monopoly game.

Seems a bit cynical, I’d agree. But it was only recently said in an official judgment that a Minister of the Crown had engaged in criminal activity. That minister seems to still have his job, because apparently somehow the law no longer matters, and is open to interpretation it seems. The Federal Aged Care Minister has all-but literal blood on his hands, and still has his job.

No action is likely to be taken, not while the PM is getting good numbers. Because why would there be? We seem to be living in a post-truth, post-facts, post-law period in history, where since he’s donned a hi-vis vest, molested a wombat and had a coldie while cheerin’ on the Sharkies, we should all just cool our jets and get on with it. Whatever ‘it’ is.

*especially if you’re mates with the PM and want large volumes of cash dropped on your front lawn.