When did you learn that Santa Claus [REDACTED]?

Forums: Christmas, Santa Claus, Christmas Traditions, Childhood Traditions
Email this Topic • Print this Page
Reply Sun 10 Dec, 2017 10:09 am
Did you grow up believing in Santa Claus? If so, when did you learn that your parent(s) or guardian(s) was the actual person providing the Christmas gift?

What seasonal holiday activities did you and/or your family go through surrounding the existence and belief that Santa Claus was/is real?

When I was 7 I said to my mother "There isn't really a Santa Claus, is there?" and she said "No, but don't tell your little sister". I didn't mention that it had been my little sister who told me.

In my own home, I never let Santa become a histerical figure like I see many parents do now. It was kept to fun, but not over the top. None of that "Santa's watching you " crap.

We always said that Santa was "real pretend" when the kids got older.
0 Replies
1
Reply Sun 10 Dec, 2017 01:58 pm
I was at a cousin's house one Christmas, and he decided to be "Santa" for his little daughter aged about 4. He was a bit of a showman. He went upstairs and dressed up in the full costume he had hired, including cotton wool beard and eyebrows, boots with buckles on, etc. Then he starting walking about loudly upstairs. You could hear his boots on the floor above. His wife (a rather longsuffering woman) now played her part, and said to everybody "I wonder who that is upstairs?" The little girl looked a bit worried. "Maybe it's SANTA!" her mother said excitedly. The little girl looked even more worried. Then the boots could be heard coming down the stairs. The girl got very close to her mother. When Santa burst into the room, shouting "HO HO HO!" at the top his (loud) voice, she let out a piercing scream of pure terror and rushed right under her mother's skirt and refused to come out. "Make him go away!" we heard, then "He's not real!". Her mother told me later it was a miracle she had not wet herself. They later got divorced and nobody was surprised.

Her mother told me later it was a miracle she had not wet herself.

The little girl, I mean. Her mother was made of sterner stuff.

0 Replies
1
Reply Sun 10 Dec, 2017 02:36 pm
@tsarstepan,
Similar to the chanukah elves, I just sort of knew. Sure there'd be a nice gift, but, somehow I knew it had been picked and wrapped by a family member.

A friend of mine found out when he was 10 or 11. The following spring his family told him the truth about the Easter bunny.
0 Replies
1
Reply Sun 10 Dec, 2017 03:36 pm
I wasn't very old. It all boiled down to a consideration of logistics.
0 Replies
1
Reply Mon 11 Dec, 2017 02:11 am
@tsarstepan,
Santa Claus' name is banned in this house. Father Christmas brings the presents, no milk and cookies, mince pie and brandy, although quite often calvados.

He embodies the celebration and joy of Christmas, not spending money in department stores. 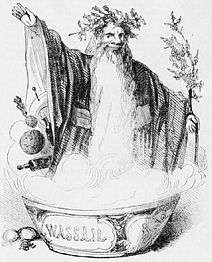 0 Replies
1
Reply Mon 11 Dec, 2017 05:38 am
We didn't have that one, as far as I recall, I can remember from a very early age looking at the tags on gifts to see who had sent them (even relying on my cousins when I was too young to read the handwriting), having a pretty good notion of how much I would like the gift based on the giver. Additionally, my paternal grandmother would visit on my birthday each year, as that was in November, to find out what we wanted for christmas. There wasn't all the hype then--department stores had a "Santa" so children could get their pictures taken (whether they liked it or not), but the extended family didn't go in for that, either.
0 Replies
2
Reply Mon 11 Dec, 2017 07:11 am
I sort of figured out the Santa thing by myself; I must've been around 5 or 6. Coming down a chimney? With a bicycle?? Puh-leez. From there it was a short step to arriving at disbelief in a Supreme Being. But here's the funny part — I maintained belief in the Easter Rabbit for a bit longer. I thought that the colored eggs were sufficient evidence to prove that it existed in some form.
1 Reply
1
Reply Mon 11 Dec, 2017 09:24 am
@hightor,
I was about 4 or 5 when I figured it out. But I was convinced to keep on pretending to believe in Santa by my older sisters when I spent time with my father.
0 Replies
1
Reply Mon 11 Dec, 2017 09:43 am
@tsarstepan,
I'm dutch. As such, we didn't do all that much with Santa Claus, our cultural gimmick was Sinterklaas. And frankly, I don't recall when nor how I learned he wasn't real. Probably another bit of my youthful days I keep firmly repressed, along with most of my other grade school moments. With a birthday early fall, and a penchant for learning, I was the youngest kid in class. I'm fairly sure that they(my classmates) rubbed my nose in the fact he wasn't real to make me cry: it seemed to be a favorite pastime of them during our daily quarter hour of playtime. Accommodating little bugger that I was, I of course complied with their wishes. I think my tear ducts were actually permanently shut down by my brain somewhere in my childhood years to make sure I wouldn't dehydrate from crying too much.

As for what cultural activities we did surrounding the existence of Sinterklaas, well, he would arrive in a number of cities by steamboat, and then parade through the city, accompanied by his 'Zwarte Pieten', who would all joke and caper around and hand out lots of candy. Good times were had, for children and dentists alike.
0 Replies
3
Reply Mon 11 Dec, 2017 02:47 pm
I found out about Santa Claus when my family got a television (mid 1950s). A guy is gonna bring me presents? I chose to believe. The stocking, the milk and cookies, the whatever, and the loot. Similarly, I chose to believe in the tooth fairly (who bore a remarkable resemblance to my father). It appears that if I was gonna get something out of whatever it was, I was willing to believe. To this day, I'm not 100 percent sure as to whether I did or didn't believe.
1 Reply
1
Reply Wed 13 Dec, 2017 02:06 am

0 Replies
1
Reply Fri 15 Dec, 2017 06:32 am
@Roberta,
my grandparents, with whom I lived for a time between hen I was 3 and 5, DID NOT want me to believe in anything but Father Chritmas. So Santa Clause was foreign until my folks (when my dad was restationed in the US after Korea) tried to "catch me up" on Christmas stuff including Santa"
Here I was, 6 years old and supposed to "believe" in this creature for whom, all evidence was clearly counter its existence.
SO, as a good turncoat, I played along with my folks who, (I believe, Believed that I lbelieved in Santa). I used to get my ears chewed by my mom who, hearing that I was telling some neighborhood girls that Santa was "Made up" . My mom really wanted our lives to be like the Post magazine and my dad was really into Sports AField and Sid Caeser.

Kids always have it tough trying to keep their parents calmed at this stressful time of year by playing along that youre having the time of your life experiencing full frontal naked greed.
Santa Claus's forensically determined existence led up to more deep inspections about the evidence for stuff like "Easter Bunny", Jesus, God, and why bumblebees fly.

Father Miszckuyn , a Jesuit, told me, when I was a kid in his school, that its really no big deal about whether we "believe" or not, even he had plenty of doubts and "He was on the payroll".
Therefore following all the evidence became an important lesson I got from all these guys and even my parents so, it wasnt really a complete waste ya know?
0 Replies
1
Reply Fri 15 Dec, 2017 06:35 am
@Real Music,
That clip is so wrong on so many fronts that I hadda pop it out it and send it to my closest colleagues for some close-in scientific scrutiny.