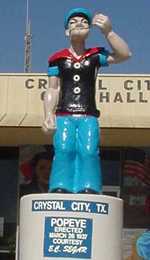 I always thought that Olive Oil needed the spinach more than Popeyeshe was quite the anorexic.
0 Replies
1
Reply Mon 15 Nov, 2004 11:30 am
Spinach are good.

"The 2nd visit was on the Wisconsin Avenue location on the Capn Tugg Show. I recall being hugely disappointed that none of it was real and how small it all was! LOL Fantail the parrot (when not in use) hung upside-down to the right of the Channel Queen's wheel; (out of camera range, of course).

It was also a disappointment that Lee Reynolds (Captain Tugg) had a fake beard and a putty nose - AND - during the cartoons, he'd run-up some stairs to the control room & we all saw him sneaking a puff on a cigarette!! : ( "

... anybody know what a.a.p. stood for in the beginning?