Please caption the following necessary scene. Thanks in advance.

She: Sure you have enough to spare?

The tension was so palpable he said that she could touch it.

She kissed me in a way that I've never been kissed before:

The usher shone his torch in our laps , dazzling us with his aim.

They were aware that god was watching them.

write captions based on the idea that the "SEX...Should we wait?" is already part of the picture?


I'm assuming that you aren't familiar with the tv show. It could be either one but your latter option tends to be an easier joke/riff to make.
0 Replies
1
Reply Tue 25 Apr, 2017 01:01 pm
Oh my Gawd, that pic is of an old record album from the sixties or seventies.

If you look around the outline of the pic you see a round crease, something which happens when you pile albums one on top of the other, (which you are not supposed to do). Who would make a "Sex...should we wait" record album, Chastity Records? 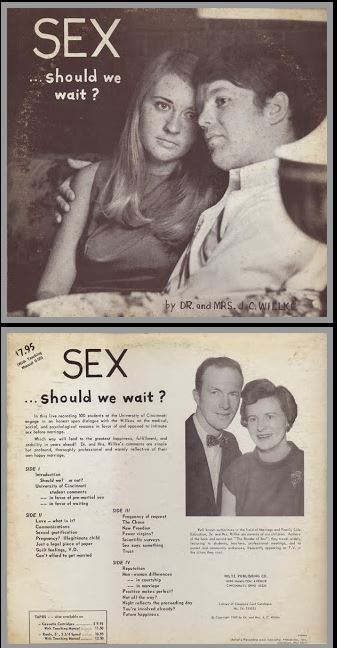 Religious-based intellectual self-improvement university/high society lecture?
1 Reply
2
Reply Tue 25 Apr, 2017 03:02 pm
@tsarstepan,
Not to go off-topic, but 1969 was the year I transferred to a live-away college from the commuter college I had attended for two years. It was the year after a Columbia U student named Linda LeClair shocked the world by moving from her dorm room into her boyfriend's dorm room at Columbia. This set off quite an issue in the New York and national papers. Much talk about the college being in loco parentis, (in place of the parents), for undergraduates. Apparently she did break some kind of rule, which the student body was charged with punishing her for. After all the national brouhaha about moving in with her boyfriend in the dorm, the student body suspended her cafeteria privileges for a month. Which light punishment set off another national issue and debate.

Apparently, as a result of this all the colleges decided that legally they were not "in place of the parents" and got rid of all the anti-cohabitation rules, because when I went up to college the next year, I was informed that 1969 was the first year the college had rescinded the longstanding rule between regulating opposite sex visits to the dorm room. This rule was that the door had to remain open to the room during the entire visit and both people in the room had to have at least one foot on the floor at all times.

He: I love you and need you physically.

She: I love you too but I don't want to turn into a tramp!
0 Replies