How do you take your coffee or tea?

Forums: Beverages, Coffee, Tea, Morning Routine
Email this Topic • Print this Page
1
Reply Sun 19 Apr, 2020 11:56 am
@Tai Chi,
Here he is in Newcastle or N'cassle as the locals call it. Lord is a generic term for a noble higher than a knight, earl is more specific. 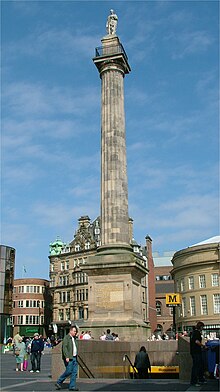 All earls are lords, but not all lords are earls. Lady is the term for a noblewoman whether or not she's married to a knight, baron, earl or whatever.

Grey's Monument is a Grade I listed monument to Charles Grey, 2nd Earl Grey built in 1838 in the centre of Newcastle upon Tyne, England. It was erected to acclaim Earl Grey for the passing of the Great Reform Act of 1832 and stands at the head of Grey Street. It consists of a statue of Lord Grey standing atop a 130-foot-high (40 m) column. The column was designed by local architects John and Benjamin Green, and the statue was created by the sculptor Edward Hodges Baily (creator of Nelson's statue in Trafalgar Square). It was paid for by public subscription.