The Atkins Method of Acting

Forums: Performing Arts
Email this Topic • Print this Page
Reply Tue 26 Oct, 2004 11:17 am
As I started reading the article, I was thinking that this generation of actors believes they can be as good as Robert DeNiro by gaining or losing weight for a role - and then the writer made the same point...

I still find it astonishing that Renee Zellweger - a thin, petite actress - was cast as Bridget Jones in the first place. Yes, she was good in the first film, but surely an actress of normal proportions could have been cast?

Gaunt to Gargantuan and Back: The Atkins Method of Acting
By Caryn James

Skulking through the psychological horror film "The Machinist," Christian Bale looks like a walking cadaver, so wraithlike you have to wonder: has he lost his mind? Not the character; he's clearly hallucinating. No, you have to wonder about the actor, who lost 63 pounds in the service of this creepy yet minor film about a Los Angeles factory worker battling a mysterious inner demon. He tortured himself for this, a little movie that ends with a "Twilight Zone" gimmick? Mr. Bale looks even skinnier than Adrien Brody did as a Holocaust survivor in "The Pianist.''

Extreme weight loss and gain is today's most popular form of stunt acting, with movie stars ballooning up and down as if they've never heard of padding or special effects or just wearing black. Mr. Brody lost 30 pounds for "The Pianist," and Charlize Theron gained nearly as much to play a serial killer in "Monster." Renée Zellweger, who gained 20 pounds for "Bridget Jones's Diary," then lost it for "Chicago," gained it back again for "Bridget Jones: The Edge of Reason" (the sequel opening next month). Tom Hanks gained and lost 50 pounds for a single film, "Cast Away."

An actor's physical transformation can be so distracting that it hurts a movie, pushing viewers out of the fictional world. It's hard to forget that there's the real Christian Bale, looking extremely ill.

Despite that risk, dramatic weight change has become a selling point, playing neatly into the national obsession with diet, a fascination that comes with its own seesawing dynamic. Television bombards viewers with commercials for weight-loss programs and low-carb snacks, occasionally interrupted by the latest, worsening news report about obesity. (Childhood obesity has tripled among grammar-school children in the last 30 years, said a government-sponsored report issued last month.) "The Biggest Loser," NBC's newest obnoxious reality show, pits teams of obese contestants against each other to see which group can drop the most weight the fastest, eliminating a member of the team that loses the least.

Some print ads for "The Machinist" even quote a review comparing Mr. Bale to other famous shape-shifting actors, saying, "I dare any of them to lose the weight Christian Bale did for 'The Machinist.' ''

In 1980, when Robert De Niro famously gained 50 pounds to play the older, out-of-condition Jake La Motta in "Raging Bull," it came across as devotion to the role - a little extreme, maybe, but sincere. Since then, actors have been pulling a De Niro to prove they can act. Some do it for art; in interview after interview, Mr. Bale has said he wouldn't have gone to such extremes for just any film, and there's no reason to doubt his motives even if we second-guess his taste in scripts.

But they also do it for Oscars. The De Niro, Brody and Theron performances all won Academy Awards, while the Hanks and Zellweger performances were nominated. It's one of the surest gambits in Oscardom: if an actor suddenly looks dangerously thin or unglamorously plump, that's acting! Part of the stunt is the quick return to glam movie-star shape: The New Yorker's review of "Monster" ran with a Richard Avedon photograph of Ms. Theron nude, showing the world she was back to normal.

What's normal for them, though, is anything but for most viewers, who are likely to find the prospect of losing 60 or even 20 pounds more horrifying than anything Alfred Hitchcock ever imagined. (Just ask those weeping, vomiting, stressed-out contestants on "The Biggest Loser.") And while we think we know the difference between movies and real life, the distinction often blurs.

"There's an overidentification with actors," Dr. Jean Petrucelli, co-director of the eating disorders, compulsions and addictions service at the William Alanson White Institute in Manhattan, said in a telephone interview. Dramatic weight changes like Mr. Bale's suggest a disconnect between mind and body, Dr. Petrucelli added. For actors, she said: "Their bodies are part of their craft. In a sense they are more adept at splitting off different parts of themselves as something they call a role. When actors dramatically change their body size, they are communicating a false sense that people should have that kind of control over their bodies' shape and size."

The pretense that dropping and gaining weight is easy only adds insult to that illusion. "I just didn't eat," Mr. Bale has been telling interviewers. And Ms. Zellweger's weight tricks may be the oddest of all, because she put on weight to look like the perfectly average Bridget Jones. But of course she's not average; she a movie star paid millions to pack it on or lose it. Stars have personal trainers to get them back in shape and private chefs to feed them again or refuse to feed them at all.

Where will this lead, beyond viewers beating themselves up because they can't diet like Renée? It's easy to imagine a new stunt-acting extreme, in which cosmetic surgeons help performers hone their most conspicuous tools, their bodies. At least when Nicole Kidman needed a new nose for "The Hours," she faked it.
Type: Discussion • Score: 0 • Views: 2,039 • Replies: 8
No top replies
1
Reply Tue 26 Oct, 2004 12:09 pm
Thank goodness that most of us don't have millions of dollars and our careers riding on our physical appearance. 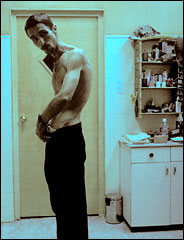 0 Replies
1
Reply Tue 26 Oct, 2004 12:50 pm
The Star system counts on the popularity of the leading actors to sell the film. A leading actor, plus or minus "X" number of pounds is still a leading actor.
0 Replies
1
Reply Sat 1 Jan, 2005 10:19 am
Couldn't agree more!
I've had numorous amounts of people telling me that I am fat or obese even before knowing my true weight! I ask them how they figure that and their stupid reply is " Because you look bigger than everyone else." And all i say is " well, maybe, everyone else is just smaller than I." That usually makes 'em think!

I myself am an espiring actress, but feel that if I have to subject myself to the judgment of stupid critics and peers who feel that if any actor, young as 14 like myself, or older has to drop or gain freakish amounts of weight to be cosidered " great", well, i just think that's dumb!
0 Replies
1
Reply Sat 1 Jan, 2005 01:16 pm
drama-dork--

Can you imagine a production of Romeo and Juliet getting favorable reviews if the actors playing the leads weighed 350 and 250 pounds?

Even Grand Opera where it used to be felt that singers had to "feed" an exceptional voice is now starring voices of "normal" weight.