Who's Famous Autograph(s) do you own?

Forums: Movies, Actors, Celebrities, Authors, Autographs
Email this Topic • Print this Page
0
Reply Sun 18 Dec, 2016 01:14 pm
@izzythepush,
I knoow. I recall the DArlecks made out of something like cardbord ice cream cones.

You don't have to watch Doctor Who if you don't want to, but millions around the globe are devoted viewers. They're not hurting you.

I do know about Flash Gordon, they remade it with Queen doing the soundtrack, and they showed the serials on kid's TV. It's not the same at all.


No, it's the longest running Sci fi TV show in the World. Eat your heart out Star Trek

What you incorrectly assume is negativity is just the friendly banter Ive gotten used to on A2K. Im actually not the one who is being touchy.

Im quite glad to see you back, Now dont get too pc on me.
I like give and take and this site has gotten very tender about its acceptance of such banter.
Im kinda testing the boundaries here and there.


Im on another thread where some of our more right wing members are getting touchy by reminding others of their uses of insulting names and ad- hominem arguments. Then the very guys use names like "Snowflake" or "cheese eater" when complaining about their opponents. (We alwys see our own posts as clever, rather than insulting-so if Ive offended, I didnt mean any such )
If Im appearing to be insulting, I dont mean to be.But I can sorta say the same in return and perhaps we have to read the way things will be read, not how we intend to say them.

I was never a fan of Dr Whozis, he just didnt cut it for me and Ive always hated soaps and Ive also been an appreciator of really good graphics and special effects, something that Dr Who could never be accused of using. My wife, the weaver , always said the DAleks looked like yarn spools from arope factory. Wasnt The flying telephone booth introduced to the series AFTER "Bill and TEds Excellent Adventure" and a lot of the plot strings harkened back to "Flash Gordon" (which itswlf was a cheesey kind of show where the space ship sounded more like a Homelite Garden Tractor than a rocket.
and the monsters they used were all rejiggered from earlier monsters.
Even the Earliest STar Trek was xheesey. This whole series, to me, didnt get good until "The NExt Generation" and capt Patrick Stewart
IMHO.

1 Reply
0
Reply Mon 19 Dec, 2016 06:09 am
@farmerman,
Doctor Who first aired in November 1963, right after Kennedy's assassination. That predates Bill and Ted by quite a long way, Keanu Reeves wasn't born until the following year.

Doctor Who is an incredible success story, originally intended as a low budget filler programme, never intended to run more than one or two seasons.

The Tardis was a police phone box due to budget restrictions, they didn't have the budget for a high tech spaceship gizmo. The story runs that Tardises have a chameleon quality so they blend in with their surroundings, the doctor's is broke with the Tardis stuck looking like a phone box, but the real reason is money.

Sorry if I'm a bit touchy, what's so wrong with eating cheese anyway?
1 Reply
0
Reply Mon 19 Dec, 2016 06:21 am
@izzythepush,
Blackadder was one of my favorites. (Except for Blackdder Goes Forth" where he played this WWI major.

The eating of cheese, apparently is symbolic of being a liberal "elite"
while the Conservative elites are eating frog legs, lamb chops and thrushes tongues and trying to pose as populist representatives of people with whom they only meet qnd greet, very four ywrs.

On of our members (layman) apprently got bounced gain for his overuse of nominating those who are fond of cheeses.
Ive always liked a good Stilton ,Asiago, or Prima donna. At lleast I hd tht opportunity to inform laymn that I dont like just ANY cheese. It must go well with ginger beer and triscuits.

Never know how our dietary habits collar our worldviews eh?

Doctor Who first aired in November 1963, right after Kennedy's assassination. That predates Bill and Ted by quite a long way, Keanu Reeves wasn't born until the following year.


I must have missed the first 20 years or so. There seems to be a return to serial "reality"tv in AMerican cable service. Although now, the serials seem to have no point at all. Like Duck Diaries, or American Pickers, or Small Houses nd Britain BAkes.(its gotten really stupid) We have episodes where there is always a common thred of participants who, although they are complete bores, get reupped year after year.

Its cheap, mindless crap. Id rather watch Mythbusters or the old ENglish version of Top Gear with mssrs Clarkson, Hammond and May. Thqt was a GRET SHOW. Bastards took Clarkson out and May and Hammond quit in solidarity. (Ive heard they are cooking up a new show called GRAND TOUR which was supposed to be launched on Netflix)

I gotta follow these three guys. Thats entertainment. I loved when they tried to float these homemadeRVs(you call em Caravans) across the ENgliish Channel
1 Reply
0
Reply Mon 19 Dec, 2016 06:43 am
@farmerman,
I don't watch Top Gear. I'd sooner have my teeth drilled. It's just a bunch of sad, homophobic, racist, middle aged men talking crap.

Clarkson has got a new show on Amazon called the Grand Tour or something like that. It's probably available where you are.

Btw, Clarkson punched a junior member of staff for not being able to get him a hot meal. He is scum. 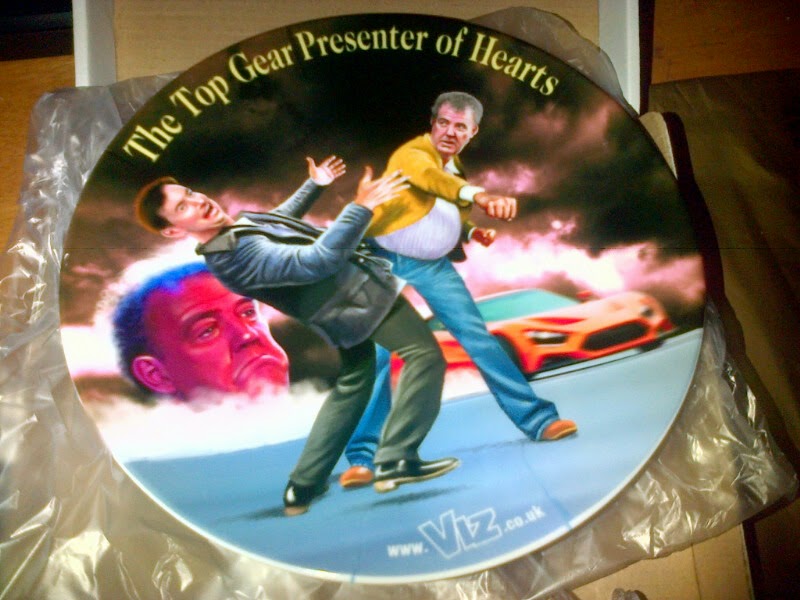 2 Replies
0
Reply Mon 19 Dec, 2016 08:54 am
@izzythepush,
Well, no matter, I separate the art from the artist. Caravaggio was a murderer and Renoir a serial statutory rapist.

Top Gear was some of the most clever and brilliant news about automobiles on any form of communication (Ya have to be a car nut to find it interesting I suppose).
If transportation means is just your way to get from here to there, youve missed what the show was about. I think the only thing we'll agree on is that the other has lousy taste.

Politics aside, probably the only area there's some consensus.
0 Replies
3
Reply Mon 19 Dec, 2016 10:34 am
I guess we're no longer talking about autographs here?
1 Reply
2
Reply Tue 20 Dec, 2016 12:04 am
@tsarstepan,
Confession: I've met or been around famous people. I was often asked whether I got an autograph. My response has always been, "Why? Why would I?" I admit it. I don't understand the joy of getting an autograph. Will someone explain it to me. Am I being dense? Contrary? Cranky? Oblivious? All of the above?
1 Reply
2
Reply Tue 20 Dec, 2016 12:47 am
@Roberta,
Nah. That's why I expressed surprise before. I don't get it either.

But, if it makes someone happy, go for it.

1 Reply
3
Reply Tue 20 Dec, 2016 04:39 am
@chai2,
One must understand the urge to "collect"(second only to the urge to spawn). It really doesnt matter what one collects really. Autographs, paintings, cookie jars, arrowheads, etc etc. we are merely responding to the biological compulsion.

Usually one doesn't even realize that they have a collection until they possess at last 5 of the things under consideration. Usually, something that occurs along with the acquisition of the item, is that one will often begin learning a lot about the collected objects in history or the biography of the writer or artist whos autographs are being collected.
Its all part of the joy of life. Alternatively, some people "collect" experiences, like following the Grateful Dead or doing lots of travelling, or being part of a gourmet cooking club. All thats "collecting" in sense.

Glad I could clear that up.

Not criticizing the collecting of autographs.

I knew a guy who collected folding "fruit knives" .These were long pocket knives with adverts on the sides for various produce companies. The knives were used to slice melons or other larger fruits to sample in the field.

Cant explain the "draw" that autographs have . I get a sense of connection when Ive got a thingy signed by some historic character.
Like I said Ive got signatures of Chang Kei Shek, FD Roosevelt, Churchill, and JF Kennedy, among others. When theres a letter or note attached , its even doubly interesting if its done in the same hand.

Maybe its a guy thing. Or a NERD thing (although Ive heard that millennials dont seem to be into collecting at all)