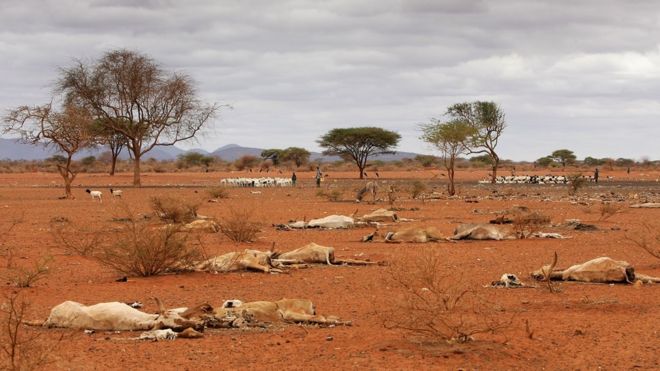 2016 looks poised to be the warmest year on record globally, according to preliminary data.

With data from just the first nine months, scientists are 90% certain that 2016 will pass the mark set by 2015.

Temperatures from January to September were 1.2C above pre-industrial levels, according to the World Meteorological Organization (WMO).

The body says temperatures should remain high enough for the rest of the year to break the previous record.

El Nino has had an impact, but the most significant factor driving temperatures up continues to be CO2 emissions.

Profits for big business shouldn't come at such high a price. You can deny scientific orthodoxy if you want, but that's all it is, denial.
0 Replies
3
Reply Tue 15 Nov, 2016 04:19 pm
@giujohn,
Quote giujohn:

Where in your article does it say that co2 emissions is the driving factor?

"In parts of Arctic Russia, temperatures were 6C to 7C above the long-term average. Many other Arctic and sub-Arctic regions in Russia, Alaska and north-west Canada were at least 3C above average. We are used to measuring temperature records in fractions of a degree, and so this is different," said Mr Taalas.

The report highlights the fact that other long-term climate change indicators are also breaking records. The amount of greenhouse gas in the atmosphere continued on its upward march in 2016.

1 Reply
4
Reply Wed 16 Nov, 2016 03:26 am
@Blickers,
Some people run away from the truth, they'd rather hide their heads in the sand and pretend global warming was made up by China.
0 Replies
2
Reply Sun 20 May, 2018 10:23 am
Ugh. https://www.inverse.com/amp/article/45010-earth-shattered-new-climate-record-400-months-temperature-is-getting-hotter?__twitter_impression=true

April 2018 was the 400th “consecutive month with above-average temperatures” on Earth, according to the National Oceanic and Atmospheric Administration (NOAA). To clarify, that means December 1984 was the last month the planet had below-average temperatures. It also means we’re headed towards a climate change of 2 degrees Celsius, a number that will have devastating effects on the Earth’s biodiversity.
Not only has Earth reached the milestone of 400 consecutive months of heating up, but last April happened to be the third-warmest April ever recorded globally, according to the NOAA report released Thursday. Carbon dioxide levels also hit another milestone by reaching the “highest level in recorded history at 410 parts per million” last month.

With these new records behind us, scientists are now forecasting that the “worst case scenario,” one in which the planet heats up more than 2 degrees Celsius above pre-industrial temperatures by the end of the century, is more likely.
0 Replies
1
Reply Sat 15 Dec, 2018 05:53 am
https://truthout.org/articles/climate-scientist-declares-ive-never-been-as-worried-as-i-am-today/

0 Replies
1
Reply Sat 15 Dec, 2018 06:15 am
@giujohn,
**** like this just amazes me. That's like asking someone if they're starving to death or dying of thirst. Who gives a rat's ass what is driving global warming--the point is that it's happening, and it is stark staring madness to dump more greenhouse gases into the atmosphere. This guy must be a shill for the fossil fuels industry.
0 Replies