What was the first _____ film you seen at the movie theater?

2. documentary (not mockumentary)? I saw a zillion documentaries in theaters as a kid and teen, a fair part of them involving matters about wars just over or going on back then. The later film I'm remembering was Harlan County, USA, a 1976 film

3. independent film? I dunno, was Best in Show an independent one? I'd have to nose around in imdb. Another movie that might be was Kaos.
https://en.wikipedia.org/wiki/Kaos_(film)
Kaos is a 1984 Italian drama film directed by Paolo and Vittorio Taviani based on short stories by Luigi Pirandello (1867–1936). The film's title is after ...

4. classic and/or cult film released into theaters ... let's say 10 years after its first theatrical release?
My first film in a theater was Bells of St. Mary's. I was four.

https://en.wikipedia.org/wiki/The_Bells_of_St._Mary's
Wikipedia
The Bells of St. Mary's is a 1945 American drama film produced and directed by Leo McCarey and starring Bing Crosby and Ingrid Bergman. Written by Dudley ...

I didn't see it anytime after that. If the film has to be ten years plus after the first screening, I'm trying to remember a favorite..
Ah, that's it, Moliere, 1978..
https://www.imbd/title/ttoo77941/
The writer and director was Ariane Mnouchkine.

5. short film preceding/accompanying an unrelated feature length film?
That would be Garlic is as good as ten mothers!

https://en.wikipedia.org/wiki/Garlic_Is_as_Good_as_Ten_Mothers
Wikipedia
Garlic Is as Good as Ten Mothers is a 1980 documentary film about garlic directed by Les Blank ... The director recommends that, when the film is shown, a toaster oven containing several heads of garlic be turned on in the rear of the theater, ...

0 Replies
3
Reply Thu 29 Sep, 2016 04:10 pm
1. foreign language (not your native tongue) film subtitled into the first language you understood?
Virgin Spring
2. documentary (not mockumentary)?
The Vanishing Prairie
3. independent film?
no idea
4. classic and/or cult film released into theaters ... let's say 10 years after its first theatrical release?
The most classic I saw was Snow White and the Seven Dwarfs
5. short film preceding/accompanying an unrelated feature length film?
I don't recall the title. It was a tribute to Nat King Cole.
0 Replies
2
Reply Thu 29 Sep, 2016 04:17 pm
I saw newsreels and cartoons before movies began, as a small kid.
1 Reply
2
Reply Thu 29 Sep, 2016 06:01 pm
@tsarstepan,
I'm going to go with things I saw in an actual theater, not part of a film festival or in an auditorium...

At least I think it was those. The 70s are a little blurry.
1 Reply
2
Reply Fri 30 Sep, 2016 02:24 am
@tsarstepan,
Interesting thread, thanks Tsar. The first film I remember seeing was Mary Poppins, or Snow White. I was very little at the time.

The first foreign language film I saw at the cinema was a French film called Subway. 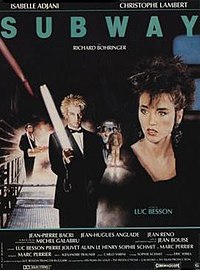 Documentary is a tricky one, in the 1970s a lot of British documentaries were played as supporting films, things like a day in the life of a coastguard officer, or a charitable cricket match by the Lord's Taverners, that sort of thing. The first actual documentary I chose to see at the cinema was Bowling For Columbine.

Independent film. Does Zulu count? It was made by a film company called Diamond Films who don't even have their own Wiki page.

The Classic film is easy. Back in the early 80s one of the local cinema would do late night screenings on a Friday night after the pubs had closed. I saw Midnight Express. About five minutes into the film someone passed me a spliff, and they kept coming. I was fairly pissed already having been in the pub all evening, and by the end of the film I was off my tits.

The last one is tricky, pretty much all the films I saw as a kid had some sort of support, sometimes just a Mickey Mouse, or an awful Disney, (non cartoon,) live action film that nobody would bother to see on its own. Then there was the documentary shorts as mentioned previously. Two films do stand out though. The first was some godawful film called Lost In The Desert, about an Australian kid and his dog left in the desert after the bloke who flew them into the middle of the desert died suddenly. He gets rescued eventually but not until he's all blistered, his dog gives birth and the puppies die and he's blinded by some sort of spitting snake. I wanted to leave 5 minutes in, the main feature having finished but my little brother wanted to stay. It was really depressing.

The other film was actually very good, a comedy called Spot starring Ron Moody and David Soul about a tramp who loses his pet dancing dog and how he gets it back, released under a different name in America.

1 Reply
4
Reply Fri 30 Sep, 2016 03:26 am
@tsarstepan,
1. foreign language (not your native tongue) film subtitled into the first language you understood?
As all not Swedish films were subtitled I really do not know which one was the first one I saw
2. documentary (not mockumentary)?
Usually seeing a film should be fun.
Saw a documentary in school about the dangers of smoking. It was so awfully realistic, that after the film we all went around the corner to smoke to calm down.
The first film I remember seeing was Snow White.
Then there was a film with a popular Swedish actor. I do not remember it at all. but my mother did. I loudly protested against things I did not like in the in the film -like hunting deers. (My own family were hunters)
https://www.youtube.com/watch?v=Zc3usRazBh8

Every arty **** I knew had their 6 month calendar of upcoming movies on the back of the toilet door. The things I saw there that I can pull off the top of my head:
Subway (durr)
Tunnelvision
Ralph Bakshi's Lord of the Rings
Heavy Metal
El Topo (actually that may have been the Mandarin)
Koyaanisquatsi
Eraserhead
Actually walked out of Raging Bull (can't remember what we thought we were going to see, but it wasn't that)
Live at Pompei Pink Floyd
Diva
The Quiet Earth
Brazil
Repo man
Android
Cat People
Liquid Sky
J-Men Forever


0 Replies
1
Reply Fri 30 Sep, 2016 08:27 am
@boomerang,
We saw the trailer for Aguirre, Wrath of God something like a dozen times - but not the movie - as our favorite theater, the Fox Venice, changed films every day, but also repeated films off and on, thus the trailers. Back then we were movie fiends, went something like once a week, occasionally twice. That theater and its films were an education to likely anyone who frequented the theater. There were a few of those repetitive trailers that we never actually checked out, one other being Harold and Maude.
0 Replies
1
Reply Fri 30 Sep, 2016 09:17 am
@tsarstepan,
1. Mononoke-hime (1997);
2. Bowling for Columbine (2002);
3. To be honest, determining what an independent film is via IMDb is pretty damn near impossible.

I can't remember if I actually seen Clerks (1994) at the cinema or not but that maybe moot. I did see Zorro (1975) two times in a literal row while my father and oldest sister watched Jaws.

I saw newsreels and cartoons before movies began, as a small kid.


That covers your short film answer.
0 Replies
2
Reply Fri 30 Sep, 2016 03:51 pm
@tsarstepan,
1. Hard to remember titles, but most likely a war movie with Germans speaking German and not English.
2. Kon Tiki a movie on a class excursion to the theater.
3. When young, we don't know what an independent film is. Come to think of it, maybe The Island Of the Blue Dolphins fits the bill.
4. We saw lots of war movies when young. First one was Jungle Fighters, the song Bless Them All really stuck in my mind for years to come.
5. The local theater played a lot of short Three Stooges films before the main movies.
0 Replies
1
Reply Fri 30 Sep, 2016 04:44 pm
On the Fox Venice, how I miss it. When I still lived there in Venice, the building became a swap meet. Not that I hate swap meets, but sad to see the change, I was. Venice has undergone many changes over the years, interesting place if you are city history curious.

Useful movie history - worth a read for involved movie goers, a treasure to me.
http://www.virtualvenice.info/media/fvt.html. Hah, looks like the owner lives in NM. What a change..

I remember the SF Mime Troupe playing on the stage at the Fox several times. Did see Theatro Campesino a few times, but not there. Well, hey, I remember a lot of what was said in the article (long but worth the read) and am pissed I we missed some good stuff.. but we tried.
Numbers? We used to pay $1.50 each for our tickets. We lived something like a half mile away.

There were a few other notable movie theaters in the LA area back then, but nuttin' like the Fox.


Independent was a grim film called For Pete's Sake. No, not the Streisand film from 74. No, this oddity was a 1966 film with Pippa Scott.

Classic? I think it may have been. Lifeboat.


I can safely say that most people haven't seen a documentary at the movie theater.
1 Reply
1
Reply Sat 8 Oct, 2016 08:37 pm
@tsarstepan,
I think these were independent, but definitely low budget. Easy Rider and Alice's Restaurant.
0 Replies