[...] Watching Brexit unfold is such a pleasure.

That's really obnoxious. Not how you make friends across the Channel. I can't believe the Guardian published this article, given that it wants to build pro-European sentiment in Britain.

One year on from the referendum of 23 June 2016, it is now clear that what we predicted is coming true: leaving the European Union is exceptionally difficult (assuming it is even possible), carries an undeniable cost, and plays havoc with the politics of the country attempting it – as the fiasco of Britain’s snap election, on 8 June, amply demonstrates.

That’s why I was in favour of a victory for leave:


Basically, he was cheering for a country to destroy itself. He knew Leave would be awful for Britain, and he cheered for it.

But the Turkey option means allowing the EU to conclude free-trade agreements in Britain’s name, and the EEA option means accepting all the rules of the single market, including free movement of people, the jurisdiction of the European court of justice, and even a contribution to the EU budget equivalent to what the UK pays today. And all of that, of course, without having the least say in the texts negotiated and agreed in Brussels …


If that's good enough for the nationalistic Turks, it's probably something Brits can live with?

we can understand, too, why all of Europe is quietly sniggering at the sorry spectacle of the worn-out old British lion


10 years from now, if the lion is desperate and starving and playing for another team, I hope all of Europe will come to understand that it was stupid to reject the idea of a healthy lion in their side. They won't be laughing then.

Personally, I think it would be best if Britain stayed in Europe. Some here have said that Britain's only "contribution" was to hold back a move toward greater unity, but that doesn't mean it will always be Brits' goal. The Brexit vote showed a huge generational gap in attitudes toward European unity. The attitudes toward the continent are more positive among the young. Of course, if they read enough of these insults in the Guardian, that could change.
2 Replies
3
Reply Sat 17 Jun, 2017 10:08 pm
@Kolyo,
Kolyo wrote:

I can't believe the Guardian published this article, given that it wants to build pro-European sentiment in Britain.

I thought it was supposed to be possible for countries to leave by democratic nonviolent means?

Theresa May has got about 10 days to put together a Queen’s Speech that will satisfy enough supporters of hard and soft Brexit alike or she will face a leadership challenge, a former Minister has warned.
[...]
Conservative eurosceptics warned any “backsliding” on hard Brexit would result in a leadership challenge, but Ms May’s new “friends” in the Democratic Unionist Party may require a softer departure from the European Union if they are to supply the parliamentary votes needed for the Queen’s Speech to pass.

Boris Johnson, the Foreign Secretary, and David Davis, the Brexit Secretary, are being touted as potential Tory leaders in the hard Brexit mould, while Amber Rudd, the Home Secretary, has emerged as the champion of a softer approach.
... ... ...

In a highly unusual move, the Parliamentary session will be doubled to two years, avoiding a vote on controversial legislation at the height of talks over the the UK's departure from the EU.

It means the Government will not put forward a new legislative programme next year and extends the next session until after the March 2019 leave date.

Commons leader Andrea Leadsom said it would give MPs and peers the maximum time possible to scrutinise Brexit legislation.

Source[url][/url]
0 Replies
2
Reply Sun 18 Jun, 2017 03:56 am
An alliance can still vote down the Great Repeal Bill. The Tories are whistling in the dark. They are like a man whose head is cut off but who does not yet realise he is dead.

It’s the kind of thing that can happen if you believe what you read on the internet, but it’s perhaps a mistake David Davis would have preferred to avoid.

At the close of his joint press conference with the EU’s Michel Barnier following the historic first day of article 50 negotiations in Brussels, the Brexit minister summed up his approach to the talks with a quote from Winston Churchill.

Or at least, he though it was Winston Churchill. “The pessimist,” Davis said, “sees difficulty in every opportunity. The optimist sees possibility in every difficulty.”
[...]
The great man did, however, say a few things about Europe. The “sovereign remedy” to the tragedy of post-war Europe, he said in 1946, was to “re-create the European family … and provide it with a structure under which it can dwell in peace, in safety and in freedom. We must build a kind of United States of Europe.”

This would be the only way, Churchill explained, for “hundreds of millions of toilers to be able to regain the simple joys and hopes which make life worth living”.

Given the circumstances on Monday, Davis may not have felt those lines were appropriate.

Two-thirds of Europeans believe the EU should take a hard line with the UK over Brexit, according to a survey.

Sixty-five per cent of those questioned in Belgium, Germany, Greece, Spain, France, Italy Austria, Hungary and Poland said the EU, while trying to maintain a good relationship with Britain, should not compromise on its core principles.

The Chatham House-Kantar survey showed just 18% of people in the nine countries – compared with 49% of people in Britain – believed the opposite; that the European commission should aim to keep the UK as close as possible, at the expense of its principles, during the talks, which began on Monday. 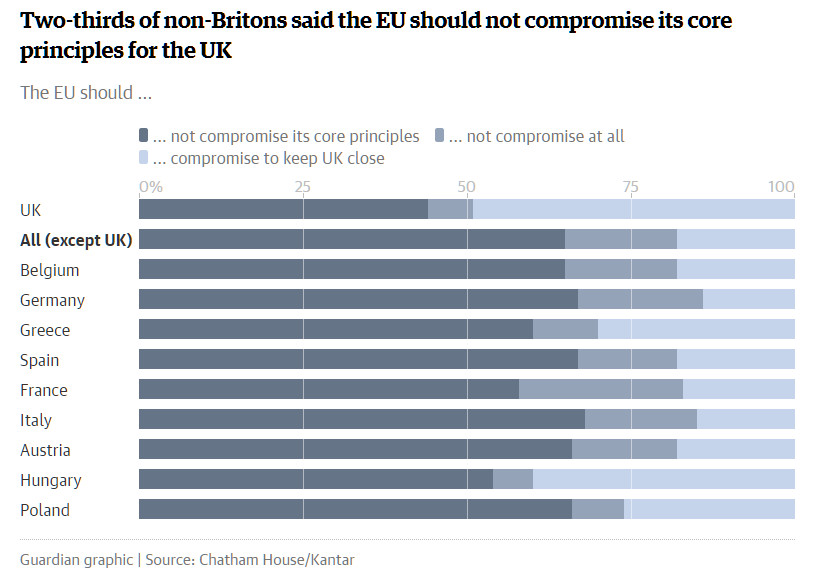 I don't get why you call it "propaganda" - you're certainly one of the very few calling the Royal Institute of International Affair of doing such though they do have a pro-establishment view of the world.
But you might get answers to your other questions directly from Chatham House (contact details at their website https://www.chathamhouse.org/)

Why don't you? You live there, right?

However, the survey itself gives already some answers:

This paper is based on a unique survey conducted between December 2016 and February 2017 in 10 countries that polled two groups: a representative sample of 10,000 members of the public; and a sample of over 1,800 of Europe’s ‘elite’, individuals in positions of influence from politics, the media, business and civil society at local, regional, national and European levels.

It wasn't about UK peeps.
1 Reply
2
Reply Tue 20 Jun, 2017 01:55 am
@Builder,
I thought, your response was related to that survey and saab's and Olivier's responses.
My bad.
0 Replies
0
Reply Tue 20 Jun, 2017 02:16 am
@Walter Hinteler,
Maybe I should not have called it "propaganda".
I did not say anything against the Royal Institute of International Affairs, but
how the survey is expressed.
65% of Europeans = 9 countries. That means 18 EU countries are missing plus those which are not in EU. So it means 65% of the asked, it does not mean all EU citizens nor all Europeans. As many only read headlines and not a full article they get a wrong impression.
65% of all young men between 18 - 20 are criminals (just made up - nothing to do with facts)
Then if you read the whole article it turns out it is only about young men who already have been involved in criminalities several times before.
I do not like these kind of statistics no matter if it is about EU, politics, cars or religion.

I do not like these kind of statistics no matter if it is about EU, politics, cars or religion.