Forums: Europe, Eu, European Union, Britain, Brexit
Email this Topic • Print this Page
3
Reply Fri 9 Jun, 2017 07:19 am
@Lash,
Nothing a couple of hundred million quid won't resolve.
0 Replies
0
Reply Sat 10 Jun, 2017 07:22 pm
I don't think I found anything in this article about Jeremy Corbyn that didn't coorespond pretty closely to Bernie. It's almost creepy how similar the movements are.

Note also the basic changes around the populist groundswell. Plummeting confidence in the media...

Actually, Corbyn would be/will be elected by just by the voters in his constituency, Islington North.

I think a lot of the Americans on here think that the UK elections are presidential in nature. Of course the personality and perceived qualities of a party leader matter, sometimes crucially, but we vote to put in power the party whose policies we support.

Is the parliamentary system really so hard to understand that you believe Americans can't grasp it, or do you just think Americans are dumb?
0 Replies
3
Reply Sun 11 Jun, 2017 03:45 am
@Lash,
Quote:

More likely, the anglo-saxon lefts are rediscovering radicalism, after decades of middle-of-the-road incrementalism. Good for them.

Plummeting confidence in the media...

Mainstream, maybe. The growth in alt media is promising.
0 Replies
3
Reply Mon 12 Jun, 2017 05:21 am
@Lash,
Sorry to damp your enthusiasm. It's just that the world is a very big place, far larger than just the UK and the US, and most countries in it move along logics, timeframes and trajectories totally different from those of the US & UK.
1 Reply
1
Reply Mon 12 Jun, 2017 05:44 am
@Olivier5,
You didn't.

I just considered what Zimbabwe and Yemen thought about this big Western political shift, and realized 'the world' was a little bigger than 'my world'.

Good to speak with a little more detail.

1 Reply
3
Reply Mon 12 Jun, 2017 12:09 pm
@Lash,
The US/UK leftist awakening is a good thing, me think. I don't know much about Corbyn but am a huge fan of Sanders. The "third way" of Bill Clinton and Tony Blair was probably a good idea at the time (and Macron is in essence playing catch-up to that third way in France right now). Yet this middle of the road way between the interests of the working class and those of the capitalists (to simplify), that middle road progressively turned right, as rich folks and corporate lobbies tended to be more powerful and influencial than labor unions & salaried folks generally.

So IMO, at this point in time the US Dems need to turn left in order to get nearer to the working class/poor folks, from whom they've become estranged over the years. The French left, on the contrary, needs to repair its ties with corporations and business owners, from whom it has become estranged over the years.... (scratch that: decades) which has led to persistent mass unemployment in France.

As a result, and even if the detail of Macron's and Sanders' policy prescriptions vary, the main thrust of Macron's economic policy tries to achieve the same balance between the diverging interests of corporations and people as Sanders is trying to strike, i.e. a form of "tamed capitalism" respectful of the greater good while still profitable enough to create jobs.

More likely, the anglo-saxon lefts are rediscovering radicalism, after decades of middle-of-the-road incrementalism. Good for them.

This radicalism (at least in America) is going to lead to political insignificance on the Left, as mainstream voters are going to reject radicalism and keep electing Republicans throughout this period.
1 Reply
2
Reply Tue 13 Jun, 2017 12:16 am
@oralloy,
You now have a radical in the white house, and another one, Sanders, almost made it. Corbyn got a great surge. So no: radicalism does not scare UK/US voters anymore.

Labour and Conservative MPs have reportedly met for secret talks amid growing pressure on Prime Minister Theresa May to take a cross-party approach to Brexit in light of the hung Parliament following the general election. 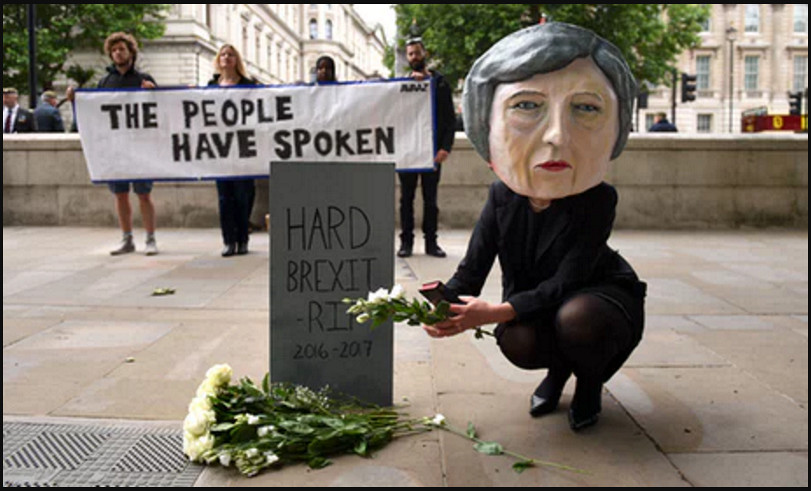 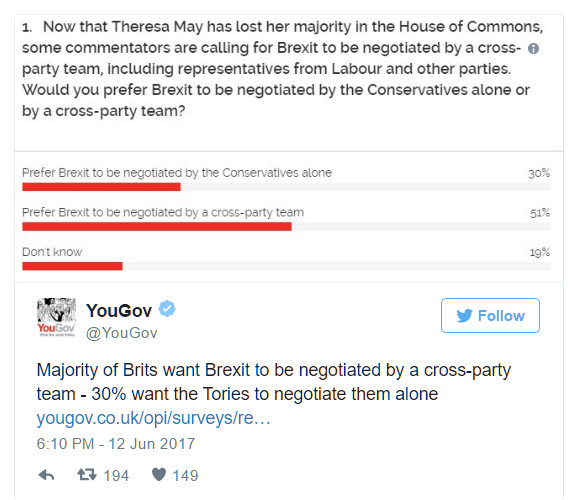 0 Replies
1
Reply Tue 13 Jun, 2017 05:21 am
As an aside:
the number of Britons becoming German citizens rose by 361% in 2016, amid concerns that Brexit could make it more difficult for British people to live and work in the EU.

The number is expected to be considerably greater next year, as most Britons applying for a German passport did so only after the referendum and most applications take from six months to a year to process.
Under current rules, Britons can maintain dual citizenship if they gain German citizenship even after Britain’s scheduled exit from the EU in March 2019.

You now have a radical in the white house, and another one, Sanders, almost made it. Corbyn got a great surge. So no: radicalism does not scare UK/US voters anymore.

I don't really think of Trump as a radical, although he is certainly shaking things up and making changes.

The American voters will never be interested in electing a far left extremist type of radical. The Republicans are going to hold the White House for the next 20 years because of it.

Corbyn is a dangerous nutcase. I expect in future elections there will be a lot of British voters who otherwise would have considered voting for Labor, but will vote for the Tories for as long as Corbyn heads up Labor. Whether that will keep the Tories in power or not I can't say. But it might.
2 Replies
5
Reply Tue 13 Jun, 2017 06:50 am
@oralloy,
Quote:

The American voters will never be interested in electing a far left extremist type of radical.

I am not talking of extremists, like the Black Panters or for that matter Trump (who's pretty extreme). I'm talking of Sanders, who's the most popular American politician right now according to a Harvard-Haris poll in April (57% approval). Bernie could well have won the election if he had run as an independent, and he had a very good run in the Dems primary in spite of the DNC being staked against him. This guy is highly electable. And America needs more people like him: reasonnable, realistic yet principled left-leaning politicians.

[...] Watching Brexit unfold is such a pleasure. One year on from the referendum of 23 June 2016, it is now clear that what we predicted is coming true: leaving the European Union is exceptionally difficult (assuming it is even possible), carries an undeniable cost, and plays havoc with the politics of the country attempting it – as the fiasco of Britain’s snap election, on 8 June, amply demonstrates.

That’s why I was in favour of a victory for leave: it would mean all the Europhobes and Eurosceptics of the union would see their dreams shatter on the brick wall of reality. So I would like to express my profound gratitude to the British people, who have once more demonstrated a spirit of sacrifice that is greatly to their credit. Thanks to them, the people of Europe will be vaccinated against populist adventurism for some time to come.
[...]
As for my own country, until recently the target of much mocking laughter across the Channel, it’s plain the presidential election of 9 May that sent Emmanuel Macron, the most pro-European of all the candidates, into the Elysée on 66% of the vote was a clear rejection of the “Frexit” proposed by the Front National (the victory of which, incidentally, the most ardent Brexiteers had called for).

The French may not fully support everything the EU does, and that’s perfectly normal, but they steered clear of what the Germans might call the Sonderweg – going it alone. And some FN officials have already got the message: since French voters do not want to abandon the euro or leave the EU, they now want to drop that part of the far-right party’s programme, at the risk of its possible disintegration.
[...]
So what exactly is the difference between “hard” and “soft”? If I’ve got it right (and I speak carefully, given the intellectual morass Britain seems to have got itself into), it boils down to staying in the customs union or even the single market so as not to harm foreign trade and British business. At worst, that’s the Turkey option (the customs union), and at best the Norway (European Economic Area) or Switzerland (bilateral agreements) option.

But the Turkey option means allowing the EU to conclude free-trade agreements in Britain’s name, and the EEA option means accepting all the rules of the single market, including free movement of people, the jurisdiction of the European court of justice, and even a contribution to the EU budget equivalent to what the UK pays today. And all of that, of course, without having the least say in the texts negotiated and agreed in Brussels …

Here we near the sublime: Brexit could amount simply to Britain losing its influence in Brussels, giving up its voice – basically, surrendering its sovereignty without benefiting from any shared sovereignty to limit the coming economic disaster. That’s what’s called political and diplomatic suicide, especially when you remember the unique position the UK had managed to carve itself out in the EU and its influence in Brussels.

Now we can really see why the citizens of the old continent are not too keen on following Britain’s example. And we can understand, too, why all of Europe is quietly sniggering at the sorry spectacle of the worn-out old British lion: this week, Emmanuel Macron even allowed himself the luxury of reminding Theresa May, during her visit to Paris, that “the door will stay open, as long as the negotiations are not over”.

But if it does decide to stay, Britain will never recover the position it once had. Ridicule, after all, always has a price. Might it not be better to consider paying it, rather than commit such an extraordinary act of national self-harm?

I don't really think of Trump as a radical

Oh hell no. What could give anyone the idea that Trump is a radical? Certainly not the salute from his supporters.