Forums: Home Improvement, Electrical, Lighting, Wiring, Switches
Email this Topic • Print this Page
Reply Sat 9 Jan, 2016 05:21 pm
Getting ready to do some remodling of my kitchen and would like to add 2 air switches on either side of the faucet to control the disposal in one case and the pendent lights in the second. The question is specific to the lighting switch. I plan to use an Insinkerator type air button to activate the switch but was hoping to find some sort of actuator/switch that would allow a high/low/off sequence for the lights. Meaning push once: High, push twice: Low, push 3 times: Off. The lights will be normal 60 or 100w incandescent bulbs.

And forgive me Helen but what's an "air button"


Forgive me Helen as I'm sorta kiddin'. For others of us who don't Google much,


1 Reply
1
Reply Sat 9 Jan, 2016 08:04 pm
@cicerone imposter,
Thanks for the reply. I am hoping to use a switch like this: http://www.lowes.com/cd_What+Is+A+Sinktop+Switch_1321888674_ . We have a large island with a sink and 3 pendant lights above. I think it would be nice to be able to control the lights from the island itself and don't want to use a regular toggle type switch due to the flat surface and the wet environment.
0 Replies
1
Reply Sat 9 Jan, 2016 08:12 pm
@dalehileman,
Here is the type of switch I intend to use: http://www.lowes.com/cd_What+Is+A+Sinktop+Switch_1321888674_. There will be one for the disposal and one for the lighting. Would prefer to have the ability to either dim or switch the lights to a low setting. The switch that is shown actually only turns a socket on and off giving power to whatever is plugged in but I want to add some sort of switch that could be activated by the puff of air from the button to turn the lights on and to a lower level when desired. I know there are spst, spdt, and dpdt switches compatible with these buttons but don't know the proper switch to get or how to configure to lower the light brightness.

Hope that clears things up a bit

Yea, thanks Helen. Now someday I gotta access that link myself to learn what it's all about

Meanwhile though for the benefit of certain lazy slobs (me) you might clarify "puff of air from the button"
0 Replies
2
Reply Sun 10 Jan, 2016 03:37 pm
@jdthelen,
What you are looking for is not something that is normally found in a Home Depot or Lowes. Spst, spdt, and dpdt are all on off switches of various kinds. With a double throw switch you could have another switch on the wall somewhere that allows you to dim the lights but your air switch would only turn them on or off to the dimmed level set on the other switch.

You need an electronic dimmer of some kind that can tell how many times the switch has been pushed and then set the dimmer accordingly. On the wall it would be something similar to this which has 2 settings, dimmed or full on....
http://www.lutron.com/TechnicalDocumentLibrary/030866a.pdf
They are making it to the home with more buttons with smart home products.
http://www.smarthome.com/insteon-2334-222-keypad-dimmer-switch-dual-band-8-button-white.html?src=Froogle&gclid=CMzktcSZoMoCFYQ6aQodoMQM5A

To do this with an air switch would mean the air switch isn't turning the light itself off/on but is instead controlling an electronic device that does the dimming. It would be possible to create one controlled by a small computer like a raspberry Pi but I don't know of anything specifically on the market to do this out of the box.


There are touch switches for LED light strings that do this but I have no idea how you would turn it into an air switch.
http://www.homedepot.com/p/Hampton-Bay-200-Watt-3-Way-Under-Cabinet-Touch-Dimmer-White-EE081WH/202518779

2 Replies
2
Reply Sun 10 Jan, 2016 03:58 pm
@parados,
parados, Good info. We're not in the market for air switches, but your info was very helpful to educate some of us interested in this kind of 'stuff.'
0 Replies
1
Reply Sun 10 Jan, 2016 05:30 pm
@parados,
Parodos, thank you for your most thorough explanation of the problem and solution. Sounds like you have convinced me to stick with a single light amount and not worry about the dimmer at this time. Maybe adding some led's under the cabinets would be a better choice if I want some low lighting capability in the kitchen. I may look into the use of a Raspberry Pi to see if there is any easy solution there.
0 Replies
1
Reply Tue 12 Jan, 2016 12:00 pm
@jdthelen,
Forgive me again Helen and no offense whatever but still, what's meant by "puff of air from the button" 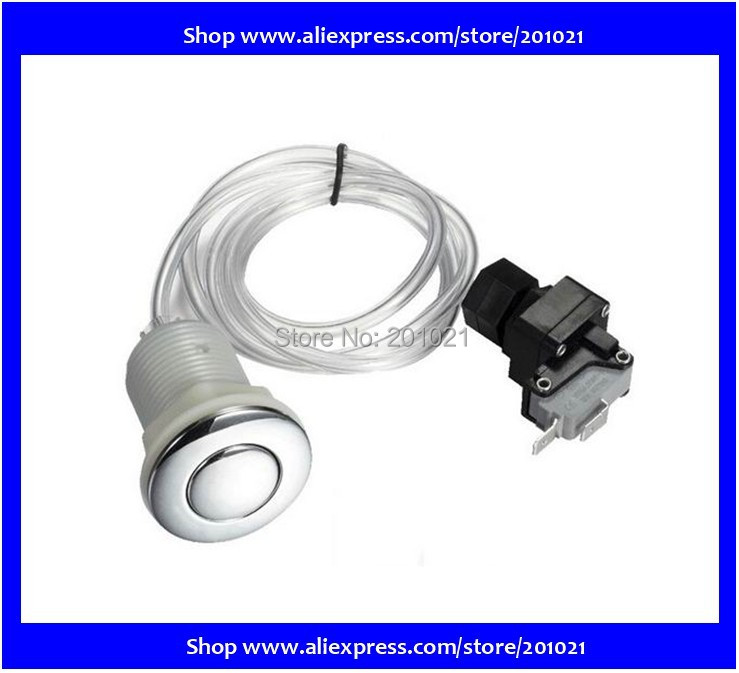 They are used in hot tubs and spa tubs to isolate the button from the electrical connection.