Forums: Economy, Stock Market, Investments, 2016, Market Crash Of 2016
Email this Topic • Print this Page
Reply Sat 2 Jan, 2016 11:05 pm
Many financial pundits are predicting a market crash this year - probably close to election time. Some predict a 50% drop in the market.

I think that fear works, and many will prepare for 'that' event. They're going to sell their stocks, and make other financial decisions based on this 'fear.'

However, it's Econ 101 that there's no way to predict future economic events. The world economy is always in flux, and nobody can predict all the variables involved in how the world economy will play out. IT'S IMPOSSIBLE.
It's a world economy at play now: it's about macroeconomics. How one country's economy impacts the world's economy has many variables at play. Emotion has much to do with it, and depending on emotion to make important financial decisions is a dangerous game.
Economists differ in their opinions. I'm no economist, but I believe the US economy is doing very well - compared to the world. Let's wait and see how all this plays out during the year.
1 Reply
2
Reply Sun 3 Jan, 2016 01:31 pm
@cicerone imposter,
It's also a lot of manipulation in creating fear and Wall Street is the initiator of volatility in the stock market. Even companies with good sound portfolio and good dividends will go down the minute one financial advisor/brokerage firm is downgrading the company - mostly without valid reason, but hundreds and hundreds of followers (day traders) who comply.
1 Reply
2
Reply Sun 3 Jan, 2016 01:37 pm
@CalamityJane,
I have learned that financial decisions - especially investing - should be made by the individual. No one is more interested in your money than yourself. Others want commissions.
0 Replies
1
Reply Sun 3 Jan, 2016 02:26 pm
Baring any real world causes, If it happens it would be another buying opportunity. If you 'buy' after ever crash in history (including 1929) and take your profits when it recovers you made lots of money. I wasn't around then but It worked that way after 2008. Bought at around DOW 8000 (didn't have the balls to do it when it was at 6600) Dow at ~ 17500 took profits & waiting...

Wish I knew WTF to do with the money.

I think they may go tits up this year.
1 Reply
3
Reply Mon 4 Jan, 2016 08:24 am
@cicerone imposter,
The problem is where to put your money if not in the US stock market. Right now, a lot of foreign money is coming into the US since our economy is doing well compared to the rest of the world. Is that going to change significantly? If the rest of the world starts doing better, maybe there will be less desire to invest in the US, but then US companies will perform better as well.

The problem I have with "Many financial pundits are predicting a market crash this year" and "Some predict a 50% drop in the market" is that those are based on smoke and they do it every year. Let's face it, I can predict a disaster, be wrong and no one will notice, but if I get lucky and get it right, I'm on the talk shows for the next two years as a market expert. It is to my advantage to predict disaster all the time. Is the 50% number anything other than just a random number? A 50% drop would return us to where the market was in the dark days of 2009 when we really were in danger of a worldwide economic and financial collapse. Does that sound reasonable? Look at this Google link for "crash of 2014". Some of the results look pretty scary: New doomsday poll: 99.9% risk of 2014 crash - MarketWatch, 2014 crash will be worse than 1987's -CNBC. Of course, 2014 was a pretty good year for the market. You can try it for pretty much any year. Pundits don't make money or get clicks by saying "yeah, the market is going to be flat to slightly positive this year."
1 Reply
2
Reply Mon 4 Jan, 2016 10:01 am
@Lordyaswas,
Lordyaswas wrote:

China is the one to watch, imo.

I think they may go tits up this year.


I actually think so too! Now hat the Chinese are able to have a second child, their buying power will go up considerably stimulating their own economy and the one around the globe.
0 Replies
1
Reply Mon 4 Jan, 2016 11:51 am
@engineer,
Looks like the market crash has already started. However, it's my belief it will be short lived. China's economy isn't doing well, but our economy isn't based on China's economy. The percentage of trade with China isn't that big to influence our economy.
As a matter of fact, our trade with China dropped last year compared to the year before. I think the trade was a negative $306 million. Our economy is some $17 trillion in 2013. Tail wagging the dog?
1 Reply
1
Reply Mon 4 Jan, 2016 02:40 pm
@cicerone imposter,
Looks like the markets in Japan, the UK, and Germany is affecting our market.
0 Replies
3
Reply Wed 6 Jan, 2016 01:57 am
@seac,
Quote seac:

There was supposed to be a US financial collapse a couple of months ago. Something to do with the Chinese currency becoming the standard.

LOL, that was the Russian internet troll army. Russia has hired a bunch of internet trolls to write anti-West, especially anti-America, and pro-Putin posts on social media. Their fable is that since the dollar is the "reserve currency" of the IMF, once the BRICS money or even the Chinese yuan gets accepted as the IMF's "reserve currency", all the US dollars overseas will become instantly worthless and will come back to the US, causing inflation, economic dislocation, and finally depression. That's the talking points the Russian trolls get.

Of course, the Chinese yuan got accepted as a reserve currency of the IMF, (to join with the dollar, the British pound, the euro and the yen), and none of that stuff happened. But don't worry, the Russkies will come up with something new why the US economy is going to collapse in a matter of weeks.

Of course, the Russian economy is collapsing right in front of our eyes, but it's impolite to bring that up.
0 Replies
1
Reply Wed 6 Jan, 2016 11:04 am
Don't think we're headed for a crash-too much positive data from the world's largest economy, the US-but things can get choppy for awhile. 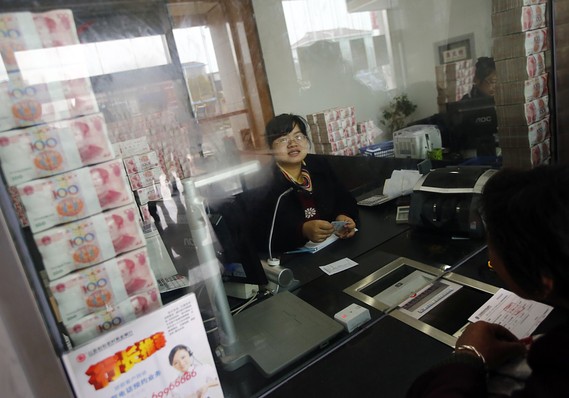 U.S. stocks opened lower Wednesday, but were off their lows of the session, as slumping oil prices, weak Chinese economic data and reports of a nuclear test in North Korea unnerved investors around the globe.

The biggest factor rattling markets early on appeared to be North Korea’s announcement, made Wednesday morning local time, that it had successfully detonated a hydrogen bomb. The announcement came after monitors detected seismic activity near the country’s northeastern coast. If true, it would be the country’s first successful test of the more powerful weapon.

Some recent reports cast doubt on Pyongyang’s claims that it tested a hydrogen bomb but a flexing of North Korea’s nuclear capabilities may be enough to unsettle markets.

“The year is three days old, and we’ve already gotten two new things -- and one old thing -- to worry about,” Chiavarone said, referring to rising tensions between Iran and Saudi Arabia, reports of a nuclear test in Korea and signs of economic sluggishness in China.

On the bright side, U.S. data continue to improve, which Chiavarone said should help market participants see that the U.S. economy is resilient enough to withstand these international pressures.

In the latest batch of Chinese data, the purchasing-managers index for the country’s services sector dropped to a 17-month low in December. Markets in Asia fell in response, with the Hang Seng Index HSI, -0.98% and the Nikkei 225 NIK, +140.00% closing lower.

North Korean state media announced that the country carried out a successful test of a thermonuclear weapon on Wednesday. A few hours earlier, an earthquake was recorded near the site of previous North Korean nuclear tests.

Investors will be looking for clues about the Fed’s thinking regarding the pace of interest rate increases this year, Chiavarone said. Any discussion about credit markets and the Fed’s feelings about China’s economic slowdown will also be of interest.

Earlier in the session, investors shrugged off a report from Automatic Data Processing Inc. showing the strongest gain in private-sector employment all year during December.

Employers added 257,000 jobs in December, according to the data. Economists polled by MarketWatch expect Friday’s nonfarm payrolls report to show that 215,000 new jobs were added.

Stocks held their losses after the Commerce Department reported that goods manufactured in U.S. factories declined by 0.2% in November. Meanwhile, the Institute for Supply Management’s services index fell 0.6 points to 55.3% in December. Economists polled by The Wall Street Journal had forecast a December reading of 56.3. A reading above 50 represents economic expansion.
http://www.marketwatch.com/story/dow-set-for-triple-digit-loss-as-china-roils-markets-again-2016-01-06?siteid=yhoof2
1 Reply
1
Reply Wed 6 Jan, 2016 12:42 pm
@Blickers,
I agree that the US economy is resilient. Because of the world economy, it will impact the US economy. By how much is the 64 thousand dollar q.
1 Reply
1
Reply Thu 7 Jan, 2016 01:39 pm
@cicerone imposter,
Oh, dear. Dow down -388 points as of this writing. Nothing like starting the New Year off with a correction. I still don't see any crash coming, though.
1 Reply
2
Reply Thu 7 Jan, 2016 03:21 pm
@Blickers,
The bear market is worldwide. Somebody hiccups, and we get 'this.'
Don't sell. There might be some buying opportunities as the market continues to sink.
1 Reply
2
Reply Thu 7 Jan, 2016 03:25 pm
@cicerone imposter,
I agree. I did very well by holding firm in 2007-2013 and using buying opportunities.
1 Reply