Forums: Movies, Science, Mars, Science Fiction, The Martian
Email this Topic • Print this Page
Reply Thu 8 Oct, 2015 07:53 am
Have you seen this one? Plan on seeing it? It's stunning in 3D! Wished I could have seen it in IMAX. Far more visually stunning than Interstellar or Gravity.

Type: Discussion • Score: 12 • Views: 5,911 • Replies: 46
No top replies
2
Reply Thu 8 Oct, 2015 08:48 am
@tsarstepan,
It was outstanding, good for the entire family (and I made my entire family go see it.) It was even interesting to see what liberties they took with the book.
0 Replies
1
Reply Thu 8 Oct, 2015 01:36 pm
I haven't seen the film, i did see the trailer when it was the subject of a thread here. Having seen the trailer, i expressed the opinion that it would be an entertaining motion picture. I also said that i wouldn't spoil anyone's fun by pointing out what was wrong with the concept.

The atmospheric pressure on most of Mars where a habitat would be erected is about 10 or 12 millibars. To put that in perspective, the atmospheric pressure on earth at mean sea level is 1013 millibars. In other words, the atmospheric pressure on earth at sea level is 1000 millibars greater than it would be in most places on Mars where a habitat might be erected. This has several implications for the story which the scientist (really?) in the video failed to mention. He may be a scientist, but it appears that he knows next to nothing about Mars. Storms on Mars can be quite impressive. Wind speeds of 300 kilometers per hour are common, and 500 or 600 kilometers are not unknown. But at 10 millibars of atmospheric pressure, that's not even enough for a sand storm. The air is too thin to pick up grains of sand. What they get are dust storms, and even then, they only pick up fines, grains of dust about a micron in size. You're not going to see any stones picked up and hurled around.

He would 't be growing anything relying of poop and the surface "soil" of Mars. Soil contains all manner of living organisms which don't exist on Mars. If we colonize Mars, we will be obliged to take our own soil with us. More than that, the surface of Mars is covered in salts of various kinds. You can't just scrape up some Martian dirt and make useful soil out of it.

There are other objections, but basically, this is fiction. It can be enjoyed as fiction. It should not even remotely be considered a realistic portrayal of what life on Mars for humans might be.
1 Reply
2
Reply Thu 8 Oct, 2015 01:56 pm
@Setanta,
Quote:

this is fiction. It can be enjoyed as fiction. It should not even remotely be considered a realistic portrayal of what life on Mars for humans might be. 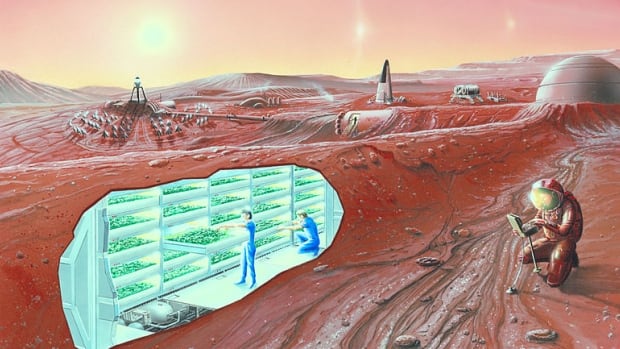 From the CBC weekly science program, Quirks and Quarks (which has been "doing" Mars a lot lately), here is an interesting piece they did on living on Mars. If you look below the illustration (posted above) at the beginning of the page to which this link will take you, there is a link for listening to the episode, which runs about sixteen and a half minutes.

How we'll live on Mars.

1 Reply
1
Reply Thu 8 Oct, 2015 09:31 pm
I am going to see it. I was going to wait but a daughter convinced me I need to see it on the mega-plex screen.
0 Replies
1
Reply Fri 9 Oct, 2015 03:48 am
@tsarstepan,
The Martian yes i'm planing to watch this Sunday.
0 Replies
1
Reply Fri 9 Oct, 2015 03:59 am
@rosborne979,
That was pretty cool. I liked the fact that i could listen to that in the background while i did other things. The only thing with which i would take issue is NASA's planetary scientist suggesting that you could grow potatoes there. So far, the evidence continues to be that the "soil" of Mars is very salty. You'd need to either grow a few generations of halophilic organisms to eat up the salt, or you'd need to leach the salt out by some means before you could grow anything in it. Rather than potatoes, you'd be best advised to live off of salads--you can grow tomatoes, various greens and maybe even some forms of pulses (beans and bean-like plants) in hydroponic or aeroponic systems. If you could grow beans, you'd go a long way to meeting your protein needs. But just dig a trench, throw some poop in and grow potatoes? No way. The soil of the earth is pretty complex, with a lot of living organisms in it, and plants on earth have evolved to exploit such soil. There's nothing like that on Mars, and if you didn't take some terrestrial soil with you, you're not going to be able to just manufacture it with some Martian dirt and some human poop.
1 Reply
2
Reply Fri 9 Oct, 2015 06:33 am
@Setanta,
Yeh, those Big Picture Science broadcasts are great for background chatter or when driving into work (which is when I usually listen to them). They have interesting guests, a good sense of humor and some great topics.

I get the feeling that Mars is a very rich chemical environment much like Earth, which is a good thing for anyone who wants to spend time up there. As to whether it's "easy" to grow potatoes or not, I suspect nothing will be "easy" on Mars, but that we'll find ways to get it done. Most of all I just hope we get the chance to try. For me at least, space exploration isn't all about gathering scientific data, which machines are good at. It's about watching people do exciting things. The Martian was an exciting film, but I can only imagine what it would be like if it was happening for real and all of humanity was experiencing it together.
2 Replies
1
Reply Fri 9 Oct, 2015 06:46 am
the only problem i have with The Martian is if i want to see it i have to go to a theatre and interact with The Humans that congregate there

i'm gonna wait for the VHS

Martian soil is lloded with perchlorate ion. The neat thing about this is that specific organisms can metabolize this and release Oxygen . Pwerchlorate is loaded with oxygen also.
Itd be a new type of contaminant reduction. The bugs could be seeded and they release oxygen by enzyme reactions and the Cl is turned into a chloride ion which is easily taken up by halophyte plants , or else it can be gaseously emitted to help oxidize rock (Cl is among the best oxidizing agents)
1 Reply
1
Reply Mon 12 Oct, 2015 08:21 am
@farmerman,
The idea of mixing human poop with Martian soil would never make it past the NASA's planetary protection office.
1 Reply
1
Reply Mon 12 Oct, 2015 08:23 am
@hawkeye10,
maybe thats the only way to get the perchlorate munching critters up there. Then we have a load of earth worms that can live on the freed up oxygen

0 Replies
1
Reply Mon 12 Oct, 2015 08:43 am
The scientists at JPL keep saying that they are continually surprised by Mars and they keep needing to rethink their understanding of the geology and chemical processes.

But that just makes me wonder if life itself is the cause of the environmental oddness. Just as earth microbes changed our atmosphere, Mars microbes could be changing the chemistry of the sub-surface water.

1 Reply
1
Reply Mon 12 Oct, 2015 11:42 am
@rosborne979,
JPL's business IS to keep getting new stuff anmd thinking it over. I was always amazed at the amounts of perchlorate salts theyve found. These salts are an associate withing evaporated salt water deposits on earth (called evaporites). The perchlorates in the Chilean Nitre deposits is very small but the stuff in Mars, from the mobile spec lab, is very high.
Heres a paper by USGS on perchlorate concentrations in earth evaporites.

BTW, at complete dryness, because 3 of the 4 Oxygens are double bonds, there is a lot of energy stored up there an these salts are often mildly explosive
0 Replies
2
Reply Wed 14 Oct, 2015 08:46 am
@tsarstepan,
It wasn't a bad movie, but it didn't make a lot of sense in places.


If you're going to use your suit as a jet, then make damn sure the thrust goes through your center of mass. Sticking your hand out to your side would just cause you to pinwheel.

The evacuation happened when the MAV was in danger of tipping due to wind forces... Yet NASA lands MAVs years ahead of their intended mission, and just kinda hopes they're still upright when needed?

I think the actual force that "wind" on Mars can generate has been adequately discussed elsewhere.

If your MAV is tumbling out of control, then nuts and bolts are not going to be rattling around randomly. They're going to settle due to the rotation acting as a centrifuge.

If you don't have enough fuel to slow down, catch your astronaut, and then re-accelerate, then maybe blowing a hole in your ship to "slow down" is a bad idea. Just sayin'. Particularly if you have a rotating torus attached to your ship, AND IT"S STILL ROTATING DURING MANEUVERS!

If you're tethered, and you get stopped by the tether, what trained astronaut is going to just hit the thrust again in the hopes of magically stretching the tether another 100 meters?

If you and another astronaut are tethered and rotating, then you will only speed your rotation by shortening the distance between you. Anyone who has seen a figure skater knows this.


OK, end of rant. I'm just sick of hearing about how accurate the science is.