Forums: Russia, Syria, Aircraft, News, Politics
Email this Topic • Print this Page
-2
Reply Fri 2 Oct, 2015 04:35 pm
@Tes yeux noirs,
You left out a term and I assume that'd because you're not familiar with it.

SlicKKK KKKlintler was said to be America's first black president.....

NATO reporting names start with F for fighters and B for bombers. The SU34 is a fighter with ground attack capabilities which is why NATO call it "Fullback". Compare e.g. Bison, Blinder, Bear etc which are true bombers.

The picture that emerged Wednesday afternoon was of a U.S. administration that wasn’t taken by surprise when Russia attacked—American officials had been telegraphing the strikes for nearly 10 days—but that had no real response to a Russian offensive that has now encompassed both the ISIS forces that the U.S. is trying to destroy.

I can see ineffectual, as Mr. Obama has decided to keep the US out of Syria, and not being involved leads to not having input.

But where do you get incompetent? Syria is a mess. It may well be that keeping us out of Syria was the best thing he could have done.

Obama the bystander, but it is his constantly running his yap about wanting to do something and claiming that he is the one who knows what to do that makes him by definition incompetent. Either that or a liar. I was giving him the benefit of the doubt.
2 Replies
-2
Reply Sat 3 Oct, 2015 11:50 pm
@hawkeye10,
The situation with Obunga is extremely dangerous and we need to get rid of his sorry ass like yesterday. The dufe has just presided over the total collapse of US foreign policy and, as Larouche Pac experts note, the only two possibilities in front of him are resignation, or doing something totally insane. 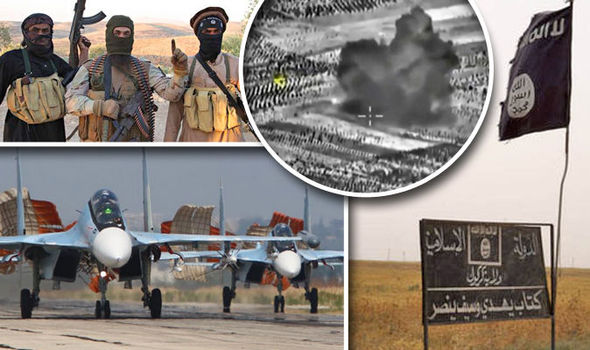 Again the SU-34 is a medium bomber and not a fighter. It can carry relatively huge bomb loads and inflict pinpoint and gigantic damage on something like ISIS.
1 Reply
1
Reply Sun 4 Oct, 2015 12:22 am
@gungasnake,
Quote:

the SU-34 is a medium bomber and not a fighter.

The Sukhoi Su-34 (Russian: Сухой Су-34) (NATO reporting name: Fullback) is a Russian twin-engine, twin-seat strike fighter. You have been told this already. It can drop bombs but only an ignoramus would call it a "bomber".

2 Replies
1
Reply Sun 4 Oct, 2015 12:33 am
@Tes yeux noirs,
Any fighter that has been designed to deliver nuclear bombs is in my view a "fighter/bomber". Your mileage may vary.
1 Reply
-2
Reply Sun 4 Oct, 2015 01:54 am
@hawkeye10,
This thing is much bigger than any normal fighter and has two massive engines to get it off the ground with huge bomb loads. It's a modern version of the sort of twin-engine medium bombers we used in WW-II, particularly the B25. It has significant defensive capabilities which don't involve gunners as with the B25.