http://russia-insider.com/en/politics/president-putins-15-years-power-en-subtitles-video/ri7089
Type: Discussion • Score: 0 • Views: 1,662 • Replies: 5
No top replies
2
Reply Tue 1 Sep, 2015 01:55 pm
@gungasnake,
If US kids ever have to face Russia militarily (a possibility that isn't that unreasonable given entanglements in Syria and Eastern Europe), which side will you support, Gunga?

The Russian delegation at the 70th session of the UN General Assembly in New York in September, will be led by President Vladimir Putin. The presidential decree was published on the official Internet portal of legal information.

The Russian foreign Ministry, according to the order, will approve the composition of the advisors and experts, as well as the necessary technical personnel.

If US kids ever have to face Russia militarily (a possibility that isn't that unreasonable given entanglements in Syria and Eastern Europe), which side will you support, Gunga?

This is the US-backed side in Ukraine: 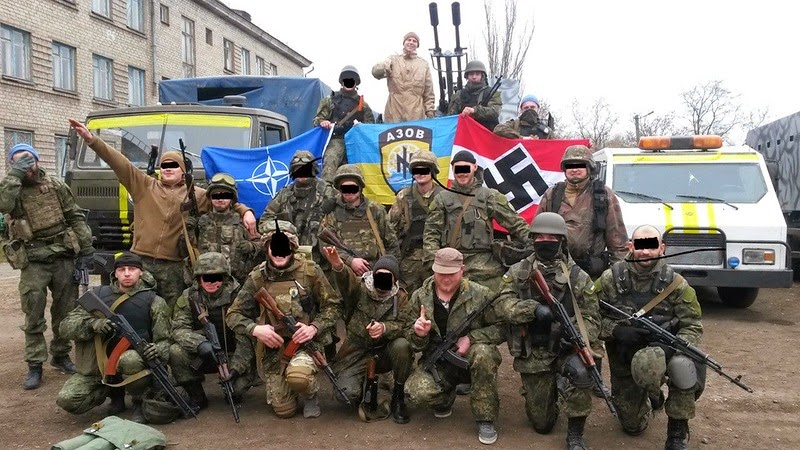 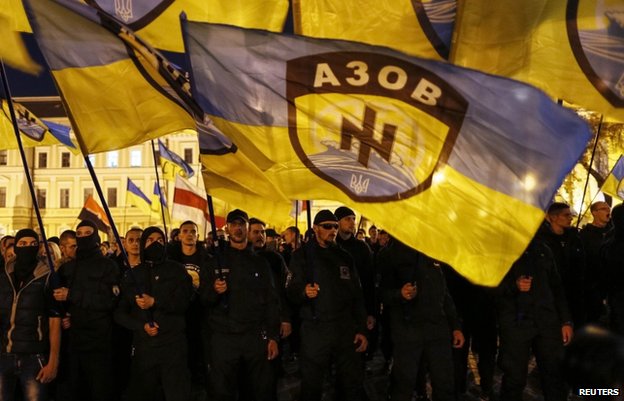 You gonna be supporting those assholes, Max?? You gonna be yelling Heil Hitler as you lead the charge???
0 Replies
-1
Reply Thu 3 Sep, 2015 09:57 am
@maxdancona,
Maxdumbcunta:

If US kids ever have to face Russia militarily (a possibility that isn't that unreasonable given entanglements in Syria and Eastern Europe), which side will you support, Gunga?

Looks like you're gonna get your chance to see what happens in Syria double-quick here, Max. Vladimir Putin has sworn to protect Christianity and Christians in this world and all signs indicate he is preparing to do just that in Syria:

Amid widespread reports that Russian President Vladimir Putin is about to intervene militarily in Syria to defend the sovereign government of President Bashar Assad, against the genocidal lunatics of the Islamic State (ISIS), Lyndon LaRouche has thrown his support behind Putin. A Russian military intervention at this time would be a "strategic game changer," that would crucially frustrate President Barack Obama's plans for a military confrontation with Moscow.

Over the past 48 hours, news reports from a wide range of venues have all indicated that Putin is about to dispatch Russian fighter planes and as many as 2,000 Russian pilots and support personnel to Syria, to defend the country against the ongoing ISIS onslaught. A Syrian newspaper, close to the Assad government, reported that Russia is planning to build a new naval facility on the Mediterranean coast near the city of Latakia, and that Russian air force personnel are moving into air bases on the outskirts of Damascus, and are soon to launch air operations against ISIS and other jihadist rebels in coordination with the Syrian air force. According to one US intelligence source, Russia has been secretly negotiating with Israel to avert a confrontation, and has been also conferring with Iran over the coordination of support for the Assad government. In recent days, the Daily Telegraph has confirmed that ISIS has been using mustard gas and other chemical weapons in attacks on towns in both northern Syria and in the Kurdish Region of Iraq.

"Putin is the only one with the authority to support Syria militarily. It is an immediate game-changer, on the table right now."

LaRouche added that such an action by Putin would be in response to the fact that Obama has taken actions,

"escalating the move to crush Syria. If Putin acts now to provide military support, Obama will be cornered. His entire policy of war provocation against Russia will fall apart."

LaRouche further noted that Putin has, in the past, shown the kind of leadership qualities to act decisively in the face of an existential threat.

"I saw it personally in the 1998-99 period, when Putin was confronted with a major destabilization by Chechen terrorists."

The fraud of the US, Saudi, Turkish, and Qatari interventions in Iraq and Syria have been exposed by the fact that, after two years of continuous military operations, ISIS and other jihadist fronts like the Nusra Front, have continued to expand, grabbing more territory and drawing in foreign fighters who conveniently slip across the borders from Turkey into Syria and Iraq. Gen. Michael Flynn, former head of the Defense Intelligence Agency, made clear, in a July 29, 2015 interview with Al Jazeera TV, that President Obama willfully gave his support to the jihadists, despite direct and detailed warnings from DIA and other US intelligence agencies about the consequences. A second former top DIA official pointed out that, when NATO, at the Turkish government's request, established Patriot missile batteries along the Turkish border with Syria, they, in effect, created a no-fly zone in which Nusra Front and ISIS could freely operate without threat of bombing from the Syrian air force.

Putin is in a position to fundamentally alter the strategic equation, globally, by taking this pre-emptive action in support of the Assad government. Putin is well aware of President Obama's commitment to provoke a general war with Russia.

" it is no longer possible to avoid a conflict. Under those circumstances, the only available option is the appropriate, pre-emptive flanking operation. I cannot say, with certainty that Putin will make the intervention in Syria. I consider it highly probable that he will act and will deliver a deadly blow to ISIS and shake up everything."