An Argentine wanted by the US in connection with the investigation into allegations of corruption at Fifa has turned himself in to police in Italy.

Alejandro Burzaco was the president of Argentine sports marketing firm Torneos y Competencias and one of 14 current and ex-Fifa officials and associates indicted over the scandal.

Interpol had issued an alert requesting his arrest.

He disappeared following the arrest of seven Fifa executives on 27 May.

Swiss media reported that he was not in his room when police acting on extradition requests from US authorities raided a hotel in the Swiss city of Zurich, but was having breakfast and so was not arrested.


Mr Burzaco, who also has Italian citizenship, walked into a police station in the northern Italian city of Borzano along with his two lawyers on Tuesday.

He is being held in a cell in Borzano police station, officials told Spanish news agency Efe.

The US Department of Justice alleges that Mr Burzaco conspired to win and keep hold of lucrative media rights contracts from regional football federations by paying up to $110m (£72m) in bribes.

An Argentine judge ordered his arrest after he was named in the US indictment for racketeering conspiracy and corruption.

Judge Marcelo Martinez de Giorgi warned Mr Burzaco and two more indicted Argentine sports executives, Hugo and Mariano Jinkis, that they would be considered fugitives if they did not turn themselves in.

The whereabouts of father and son Hugo and Mariano Jinkis is currently unknown.

Interpol issued "red notices" for their arrest, along with Mr Burzaco and three others, on 1 June.

Mr Burzaco was dismissed from Torneos y Competencias on 3 June.

The company has denied any involvement in the alleged bribery.

In a statement released on 27 May it said it regretted "being caught up in a case of this nature, which hurts its prestige and reputation forged over more than 30 years of hard work and professionalism".


Forever the optimist, me.
1 Reply
1
Reply Tue 9 Jun, 2015 02:36 pm
@Lordyaswas,
Everyone wants to make a deal, especially Jack Warner who is completely banged to rights, with local politicians lining up to condemn him.
0 Replies
1
Reply Wed 10 Jun, 2015 11:58 am
Just heard on the BBC Nooz that Swiss Authorities have gone into Fifa in the past hour, and taken Computer stuff from several offices, including Sepp Blatter's.


Not long now.
1 Reply
1
Reply Wed 10 Jun, 2015 12:02 pm
@Lordyaswas,
I don't know if the Swiss have sub judice like us, but if they do it will explain why they've been so tight lipped about the investigation into the Russian and Qatari bids.
1 Reply
1
Reply Wed 10 Jun, 2015 12:05 pm
@izzythepush,
Pure speculation on my part, but I would bet that information gained from the people they have in custody has given them enough to get a warrant and to know exactly what to look for.

The worms inside the can are just about glimpsing daylight. 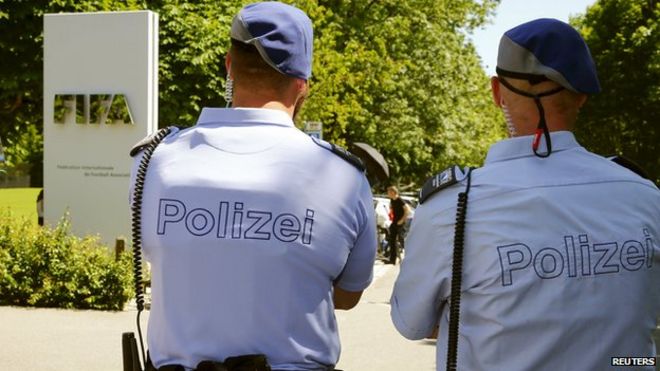 "Fifa has handed over computer data to the Swiss authorities investigating the World Cup bids for 2018 and 2022.
The information was seized at the Zurich headquarters of world football's governing body from offices which included that of its president Sepp Blatter, the BBC understands.
Fifa said it had co-operated fully with the authorities.
Swiss police said last month that they were looking into how the forthcoming World Cups were allocated.
The US Federal Bureau of Investigation (FBI) is also carrying out an investigation into corruption at Fifa. So far 14 people have been indicted, nine of whom are current or former Fifa officials.
IT data from the offices of secretary general Jerome Valcke and the organisation's financial chief Markus Kattner is also believed to have been released to Swiss police.
Fifa reiterated that it had instigated the inquiry and the organisation was, according to the Swiss Attorney General, the "injured party".

Fifa communications director Walter De Gregorio has been sacked after sealing his fate with a joke about the governing body on Swiss TV.

Gregorio told Swiss chat show Schawinski: "The Fifa president, secretary general and communications director are all travelling in a car. Who's driving? The police."

Fifa announced in a statement that De Gregorio had "relinquished his office".

A corrupt Fifa official worked undercover for investigators for 18 months while on the governing body's executive committee, it has emerged.
Chuck Blazer, 70, struck a deal with prosecutors in the United States after pleading guilty to charges of bribery, money laundering and tax evasion.
Details of that agreement have been revealed after a judge agreed to a request by five media groups.
The document shows Blazer was secretly co-operating from December 2011.
The American was on Fifa's executive committee from 1997-2013.
Last month, US prosecutors indicted 14 Fifa officials on charges of racketeering, fraud and money laundering involving tens of millions of dollars over 24 years.
The 19-page co-operation agreement was signed in November 2013 - the day Blazer pleaded guilty - but references written agreements between himself and the US government dating back to 29 December 2011.
The document says: "The defendant agrees to furnish to the office all documents and other material that may be relevant to this investigation... and to participate in undercover activities pursuant to the specific instructions of law enforcement agents."
The New York Daily News reported last year that Blazer had bugged meetings with executives at the London 2012 Olympics with a wire device concealed in a key fob.

Looks like the Swiss authorities will make a statement today, about the bidding processes for Russia and Qatar.
0 Replies