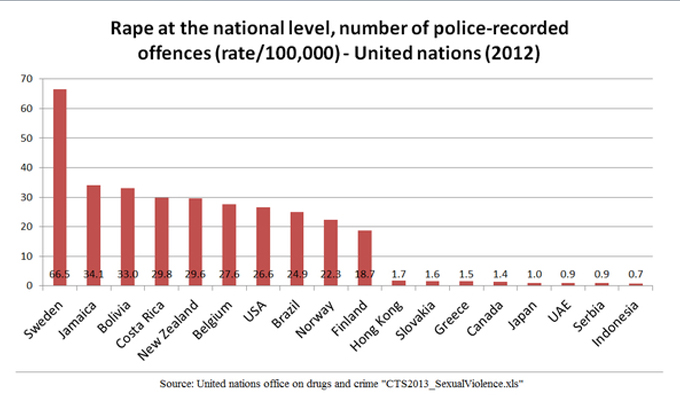 Why do we mention 1975? Because that was the year the Swedish legislature decided to adopt a policy of multiculturalism and set about transforming Sweden from a largely homogenous society into an aggressively multiethnic one....

0 Replies
0
Reply Sun 22 Mar, 2015 01:14 am
wstch
1 Reply
2
Reply Sun 22 Mar, 2015 03:43 am
@saab,
I have been reading Swedish articles and what you say is correct but the truth behind you have not been pointed out.
Swedish women do to a great extent report a rape.
Whereas in many other countries it is not done. In India a women who reports a rape to the police might be raped at the policestation.
Other countries stone a raped woman to death as she has been unfaithful.
The list is long.
Also Swedish law has been changed what raped is concerned.
Not only men but also women can be charged for having raped a person.
Raped is not only a intercourse but also harrasetment with a foreign object.
Certain sexual assaults are declared as raped.
Psychological it is interesting to see the difference between the Scandinavian countries at a certain degree northern Europe - forget the rest as people, law, traditons and how society looks upon rape is so different.
1 Reply
3
Reply Sun 22 Mar, 2015 04:07 am
@saab,
I think that you're points are well-known, but totally neglicted by those, who actually want to point to something different.
"Rape" (brottsbalk) as defined in the Swedish Code has in many paragraphs criminalactionas,which wouldn't be reported in most other countries or aren't criminal there. (For instance, if you are sexually active with a condom, by consent, but for whatever reasons finish without it - it is rape. Or,if the woman says, she uses the pill, but actually doesn't, it is rape by her. [My cousin's daughter went through this: it wasn't rape according to the court, but it still is as such in the official published criminal statistics.])
2 Replies
3
Reply Sun 22 Mar, 2015 04:20 am
@Walter Hinteler,
Sometimes I do not understand the logic in law.
If a condom falls off in the heat of the night - can be hot in Sweden - I would say it is an accident and not rape.
Years ago a Swedish feminist suggested in the magazine Femina that men from Arabian and similar countries should be punished less than Swedes as they were not used to women dressing like Swedish women. Then I stopped buying that magazine.
1 Reply
1
Reply Sun 22 Mar, 2015 04:26 am
The point is that virtually all of the rapes in Scandinavian countries involve muslim immigrants. That leads to a rather obvious question: What the **** does anybody need muslim immigrants for in Scandinavian countries????
1 Reply
2
Reply Sun 22 Mar, 2015 04:27 am
@saab,
saab wrote:

If a condom falls off in the heat of the night - can be hot in Sweden - I would say it is an accident and not rape.


It all depends on
a) persons, who know the laws,
b) the reasons for behind the complaint/accuse.
(The [former] friend of my cousin's daughter, then a law student, just didn't want to pay for the baby.)
0 Replies
1
Reply Sun 22 Mar, 2015 04:30 am
@gungasnake,
gungasnake wrote:

The point is that virtually all of the rapes in Scandinavian countries involve muslim immigrants.

0 Replies
1
Reply Sun 22 Mar, 2015 09:22 am
@Walter Hinteler,
Here we go.
Basically the law is the same in Sweden (S) Denmark (DK) Norway (N) and Finland (F)
F: also includes penetration
N: Focus more on sexual intercourse
S.: Also takes in consideration the seriousness of the violation
DK: has taken away the "wife discount" which meant less punishment when it was the wife who was raped.
Punishment
S: 2 - 6 years
N: 3 - 10 years
F: 1 - 6 years
DK: up to 8 years and in some cases up to 12 years

In Denmark about 500 rapes are reported to the police. There probably are between 2000 to 10.000 not repoted.
It seems like when you know the man as friend, exfriend, husbond or exhusbond and report him as a rapist it is seen upon as not a real rape.

I have the impression that a man can also rape a man. Theoretically a woman can rape a woman, but so far it has never been reported,
1 Reply
2
Reply Sun 22 Mar, 2015 09:38 am
@saab,
Thanks! Laws are similar here.

In my region of our state, about 95% of rape isn't reported to the police - according to the police and women's advice centres. Both institution say that the predominating conservative and Christian background of the population (about 80% Christian Democratic Party voters) here is one of the main reasons, "rape disgraces the family".
1 Reply
3
Reply Sun 22 Mar, 2015 01:45 pm
@Walter Hinteler,
The reasons why rapes are not reported are many, such as the relationship to the perpetrator or that the victim does not know where to turn after the rape. Most rapes take place in a relationship where the victim knows the offender and because of the relationship it becomes difficult for the victim to report the crime. Many women are embarrassed for being raped and blame themselves. Have they been drinking alcohol or been dressed challenging it is even a lesser chance that they report the crime. Many do not want to go through the legal process and answer intimate questions in front of other people. They also know that there are not many offenders that are prosecuted or sentences, so they do not think that there is any point to report the rape.
0 Replies
1
Reply Sun 22 Mar, 2015 04:45 pm
I would GUESS that in the cases of rapes perpetrated by muslims, at least in cases not involving white slavery and/or human bondage, most if not virtually all rapes are going to be stranger rapes i.e. involve victims not known to the perpetrators.
1 Reply