"No one in England has ever died from the blue sickness," you'd say.

And you'd be right. 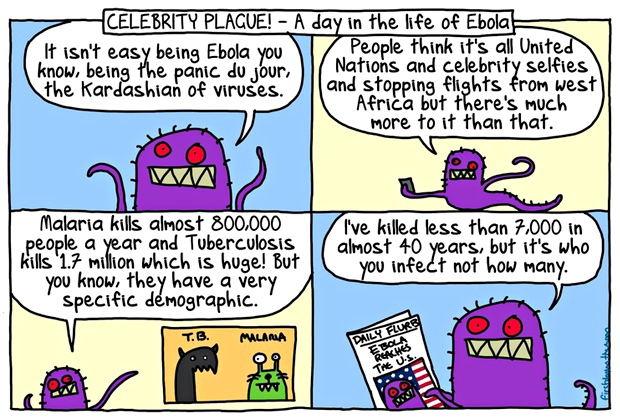 
Well, I may be an idiot, but at least I don't read the New York Times.

My news outlet, Google, led with that story. I didn't have to look on page 12.
1 Reply
1
Reply Mon 20 Oct, 2014 04:07 pm
@Kolyo,
I think you're missing the whole point of subscribing to your local newspaper. It's more about local news than national news, and that's where most people's interest lie. I live in Silicon Valley in California; don't give all that much attention to the news of other towns unless it's of national or international interest.

How a local newspaper shows preference for national or international news can be on the front page or on the 19th page. We all have our preferences.

Tell me why Ebola gets so much coverage - but between them Malaria and TB kill 2.5 million a year and don't rate anything?

In 1346 I wouldn't have known how disease was transmitted, or anything about morbidity, mortality or infection rates. Your scenario isn't an argument at all. It's a couple of logical fallacies bound together.
1 Reply
1
Reply Mon 20 Oct, 2014 07:26 pm
@hingehead,
hingehead wrote:

Tell me why Ebola gets so much coverage - but between them Malaria and TB kill 2.5 million a year and don't rate anything?

It gets the coverage because the number of cases is increasing by orders of magnitude each month in Liberia.

Cases of malaria and TB haven't increased in number by a factor of 8000 over the last year.

What upset me about the cartoon was that it claimed we shouldn't worry about a disease that had killed only 7000. People who are worried about ebola don't care that has only killed some thousands; they see it as having the potential to kill hundreds of millions. I find arguments that use statistics about what a disease has done in the past pretty ridiculous. In 1346, for example, you could have presented similar statistics about the number of Englishmen that had died from bubonic plague. You could have said "not one single person of has died in England in the last 50 years from bubonic plague", and you would most likely have been right. Pandemics don't kill until they do.

With a fast-growing epidemic like ebola, the number already dead is not an accurate measure of how much attention we should pay to the disease.
2 Replies
1
Reply Mon 20 Oct, 2014 07:31 pm
@Kolyo,
It says no such thing as "ignore ebola." Where did you come up with that?

Our government is doing everything possible to limit the spread of ebola. Yes, they made some mistakes, but those mistakes are not being repeated. Most of those who have been exposed are now doing fine - after the 21 days. They have improved all aspects of protecting health care workers, and implementing travel restrictions for those who were 'exposed' to ebola.


Your article is proof that we should worry like hell about ebola and give it our full attention.

Well, because that's how Nigeria reacted:

"The president put out a national emergency Ebola declaration," he said.

"That meant that all of the agencies collapsed into one. No politics ... There's no problem Nigeria has that Nigeria cannot fix."


And that's the attitude that allowed Nigeria to win "Round 1" in its battle against the epidemic.
1 Reply
1
Reply Mon 20 Oct, 2014 07:52 pm
@Kolyo,
There's a huge difference between worry and what actions are taken to protect the masses. Most of those issues have been discussed and reasoned. What more are you worried about?

How worried are you about ISIS coming into the US to kill Americans?

How worried are you about ISIS coming into the US to kill Americans?

Do you worry about the widespread incidence of influenza?


In general, I think we should worry like hell about all the diseases with high mortality rates, such as certain new strains of influenza. I think we should spend about 5 times what we do on fighting all the epidemics. When diseases like malaria and TB develop resistance to our drug treatments that's of major concern to me. When I was homeless for a few months and they were testing for TB I was very concerned about that disease. At the moment, though, I think a lot about ebola, because it's the only threat I can see killing me in the next couple of years. (I can't see ISIS or bird flu doing that.)

I do try to remain cautiously optimistic about ebola. I know it's difficult to transmit -- not because I've been told so, but because Duncan didn't infect anyone outside the hospital. I also know we have a good track record of stopping ebola, as there have been many outbreaks in Africa in the past which we've put down. I don't even bother considering the possibility of ebola becoming "airborne" (for the same reasons that I don't lose sleep over the threat of supervolcanoes erupting or a comet hitting us).

But we are in virgin territory as far this disease is concerned. For the first time, it has a foothold in a country -- in fact, in more than one country. We have no experience fighting an ebola outbreak as large and as sprawling as the one in West Africa.

I think we should approach containment efforts like this one like a war, and I think "attack with overwhelming force" is the right strategy for that war. I haven't seen that attitude in people with regard to this epidemic. I've seen half-assed complacency. Our presence in Liberia is what it should have been in June, and the efforts we should be making now over there will no doubt come next January.
0 Replies
2
Reply Mon 20 Oct, 2014 08:57 pm
@Kolyo,
I'm not denying Ebola needs to be dealt with - I just don't think the media hype helps the situation. In Australia our government is refusing health workers permission to go to West Africa, with one making a statement that we'd get serious when it got to Asia - clearly a nutsical point of view - if it gets to Asia in plague proportions the battle is lost - that's why Nigeria's success is so important - the sky isn't falling - rational, committed responses are required.

But our concern over Ebola way over Malaria/TB etc is also symptomatic of how much western nations don't much give a feck about black africans - until some white sod dies the same way - or we think we're gonna catch it. This is more than a lesson about disease control.

The acceleration thing is ludicrous. I didn't eat any chocolate last week - today I had two pieces - that's a bazillion percent increase. AAAAAGH.

Sorry got a little silly there.

What got us worried wasn't the acceleration - it was that a couple of white folk got it and returned home (to Dallas and Spain). A bazillian percent increase.

This article better sums up my feelings

A couple of personally selected quotes from the article

That a nation of 11 million people, with a GDP of $6,051 per capita, is leading the effort says much of the international response. A brigade of 165 Cuban health workers arrived in Sierra Leone last week, the first batch of a total of 461. In sharp contrast, western governments have appeared more focused on stopping the epidemic at their borders than actually stemming it in west Africa. The international effort now struggling to keep ahead of the burgeoning cases might have nipped the outbreak in the bud had it come earlier.

André Carrilho, an illustrator whose work has appeared in the New York Times and Vanity Fair, noted the moment when the background hum of Ebola coverage suddenly turned into a shrill panic. Only in August, after two US missionaries caught the disease while working in Liberia and were flown to Atlanta, did the mushrooming crisis come into clear focus for many in the west.

“Suddenly we could put a face and a name to these patients, something that I had not felt before. To top it all, an experimental drug was found and administered in record time,” explained the Lisbon-based artist. “I started thinking on how I could depict what I perceived to be a deep imbalance between the reporting on the deaths of hundreds of African patients and the personal tragedy of just two westerners.”

The result was a striking illustration: a sea of beds filled with black African patients writhing in agony, while the media notice only the single white patient.

“What I’d like to see is a little less hysteria in the US and the UK,” said Andrew Gleadle, programme director for the International Medical Corps (IMC), which recruits health personnel for global humanitarian disasters, as he snatched a breather between shifts in Sierra Leone. “We may get a few isolated cases [in the west] but we’re not going to get an epidemic. We need more focus on west Africa where the real problem is.”

In a companion article in the GW

Selected quote with my emphasis added

Kim said that countries such as Sierra Leone had used financial support from the Bank to improve energy supplies, but added: “This has taught us that we have to be much more serious about putting health systems into place.”

He contrasted health systems in the three west African countries with Rwanda, which has 55,000 health workers. “If this had happened in Rwanda we would have had it under control.”

Kim said it was fortunate Ebola was not a quick-moving virus but the chances of a quick moving virus in the next 10 years is high.

2 Replies
2
Reply Mon 20 Oct, 2014 09:09 pm
@hingehead,
You got it spot on! Americans worry to death because 3 Americans were victims of ebola while thousands in Africa are dying every day. They will send solders to kill others in the field of battle, but hesitate to help a country that needs medical assistance in Africa.

Americans make every effort to disenfranchise against Blacks and Hispanics from voting, and won't help the African nation that's a worldwide problem.

Look at the US response against ISIS. The message is clear.

What got us worried wasn't the acceleration - it was that a couple of white folk got it and returned home (to Dallas and Spain). A bazillian percent increase.


What you're saying about Americans in general is half-right with respect to me.

On the one hand I was super worried even when only 100 Africans had it. But on the other hand I wasn't worried about them for their sakes; I was worried about numero uno. During the Black Death I would have been the type of guy who ran from his sick family to save himself and ended up carrying the plague to new villages. Hey at least I'm honest. (I'm not racist either, unless you consider me a race all to myself.)
2 Replies
1
Reply Mon 20 Oct, 2014 09:16 pm
@Kolyo,
Frankly, no one knows how they will react to similar circumstances until it happens to them. Your honesty is a breath of fresh air.
0 Replies
2
Reply Mon 20 Oct, 2014 09:40 pm
@Kolyo,
I'm not castigating Americans - we're just as bad, as are the Europeans.

i found the Carrhilo cartoon that first article referred to.