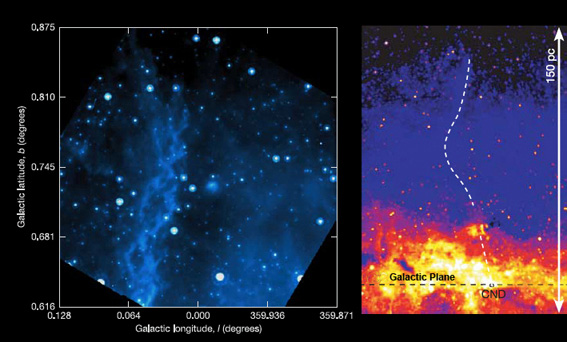 That's called the "Double Helix" nebula. It basically amounts to the Birkeland current which runs through the center of our galaxy.

Researchers also report that “the magnetic field in the central few hundred parsecs of the Milky Way has a dipolar geometry and is substantially stronger than elsewhere in the Galaxy.” Birkeland filaments align with the ambient magnetic field which is, in turn, generated by electric currents flowing into the central plasmoid.

Planet Earth seems to be a pebble in the grand scheme of things.

Great photos. I see lots of them now that I have Windows 8.1. There is a news feature...and I have all the science and astronomy mags on tap.
1 Reply
1
Reply Tue 22 Apr, 2014 12:58 pm
@Frank Apisa,
There is a gigantic paradigm shift in progress as to understanding how interstellar and intergalactic space operate. Until now, scientists have accepted a gravity-only or gravity-mainly cosmology, that is, a belief that gravity mainly controls and governs the cosmos.

In real life, gravity is by forty orders of magnitude the weakest force in nature. Asking gravity to hold galaxies together or form solar systems is like asking the littlest kid in the school to do the power-lifting event.

In real life, ninety nine point nine-something percent of the mass of the universe is in plasma form. Because of the nature of this fourth state of matter, you get charge separation over immense regions of space and because of the charge separation, you get currents arcing through giant regions of space and more often than not, these currents, called "Birkeland currents", take the form of twisted pairs which resemble the double helix of RNA/DNA. Plasma discharge has three possible modes, dark mode, glow mode (like a neon sign), and arc mode. The Double Helix nebula in the image is such a Birkeland current.

Also in real life, solar systems like ours are originally formed up in the form of Herbig/Haro objects which amount to the electromagnetic Z-pinch points of such a double-helix current agglomerating plasma into solid objects (proto-stars, stars, planets...) and these original solar systems look like beads on a string rather than like orbital systems.

On the largest possible scale, such Herbig/Haro object strings take the form of strings of galaxies, which positively should not exist in a gravity-only cosmology.
0 Replies
1
Reply Tue 22 Apr, 2014 02:54 pm
@gungasnake,
The whole article is detailed beyond my ken, but I read some of the material in an article refuting the claim there are no blackholes. I posted the "face" blackhole here. Good stuff I'll have to read several time before I understand it in any way. Thanks for posting it.
0 Replies