Forums: Politics, Ted Cruz, Canajun Cruz, Canajun Prez, Nil
Email this Topic • Print this Page
3
Reply Fri 3 Apr, 2015 05:25 pm
The Dallas News reports that the Texas Conservative is also trying to drum up support to have Congress to strip federal courts of jurisdiction over marriage equality if the Supreme Court legalizes gay marriage. I wonder how many catch the Neil Diamond reference?

"They also want to persecute anyone who has a good faith belief that marriage is a holy sacrament, the union of one man and one woman, ordained as a covenant by God." - Senator Ted Cruz

Presidential hopeful Ted Cruz was campaigning in Iowa last night, although his "political" gathering at Morningside College in Sioux City could easily have been mistaken for an old time revival meeting. There were plenty of exclamations and lamentations punctuated by attacks on same-sex marriage:

"Every one of us is concerned about how the Court might rule" said Cruz crooned to the audience, "The first thing, and I think the most important thing, every one of us can do is pray. Lift up in prayer."

"Religious liberty is not some fringe view. It is the basis of this country!” (Note to Sen. Cruz, so is equality.)

The Dallas News reports that the Texas Conservative is also trying to drum up support to have Congress to strip federal courts of jurisdiction over marriage equality if the Supreme Court legalizes gay marriage.

“If the court tries to do this,” Cruz warns, "it will be rampant judicial activism. It will be lawlessness, it will be fundamentally illegitimate."

0 Replies
3
Reply Fri 3 Apr, 2015 08:07 pm
Ted Cruz wallows in sentimental anachronism. He is a throwback to a different time. The world is changing before his eyes and he refuses to acknowledge this, the same way he shut down the government, an effort in futility. For someone whom it is said is so highly education and a mental giant, he sure is dumb. Everyone knows in order to attain the White House one must have crossover appeal. Cruz only appeal to one group, the Tea Party. According to George Wills, journalist, Ph.D. and news commentator, there is no future that exist for Ted Cruz in the White House. It seems no one outside the Tea Party particularly like the repulsive senator.
0 Replies
2
Reply Fri 3 Apr, 2015 08:15 pm
@cicerone imposter,
Quote:

Those are the chances of Democrats admitting that Killary is a crook and a liar. The perfect candidate. She has already put herself above the law.

To criticize someone like Cruz is on thing, to back a sleazy politician, married to a pig and most likely a pedophile, is another.

most likely a pedophile

"They also want to persecute anyone who has a good faith belief that marriage is a holy sacrament, the union of one man and one woman, ordained as a covenant by God." - Senator Ted Cruz

I would ask...where do they get this idea from?

Has else anyone noticed the monster of a dark money apparatus that Jeb set up just for the primaries?

Does anyone think he kept his pants on?

Are you a person who gains sexual pleasure from watching others when they are naked or engaged in sexual activity? We are discussing the loudmouth Ted Cruz and you're wondering if Bill Clinton kept his pants on? What the fu*k are you, a voyeur?
1 Reply
-1
Reply Sat 4 Apr, 2015 09:07 pm
@korkamann,
What are you yelling at that guy for? He or she is just saying Shillary has a lot of baggage. And she is the same old ****, just more of it.
1 Reply
0
Reply Sun 5 Apr, 2015 05:12 pm
@bpenny,
Bpenny, there is no point argue with the radical left. You might as well be arguing with your own dog: only response you'll get is barking. Lol.
(watch them now attack me, and accuse me that I compare them to a dog

Of course it would be very good for the all country if Ted Cruz would winn. Time to finally wake up and start making some right decisions people!
Enough of those silly mistakes; choosing Obama just because of his skin color, and we needed a black President???? Really?? Seriously? We are that low? Just look around you...
It only took 6 years; no country respect us anymore, he create debts, that we'll never will get out of, look at our streets in Ferguson, New York and other's, spewing haterage blacks agaist whites, look what democrats did to our healthcare, and than openly admitted they lied to us because we are "stupid".
Just repeating..

I wonder if every anti republican here would like continuetion of this?

Ted Cruz is true constitutional conservative, passionate honest, and truthful, which will be very refreshing for us.
I very much think he has big chance of winning. He Is gaining lots of respect for his decisiveness and unapologetic views.
Example is his promise to repeal every word of Obama care.
I hope he'll do it!

I image Hillary hopes that he is at the top of the Republican ticket also. 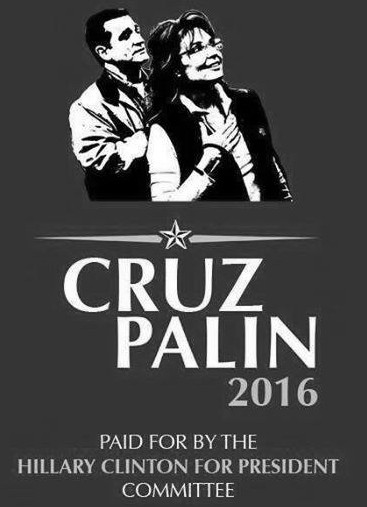 I hope Cruz is nominated! Oh what a wonderful gift to the Dems! I can hardly contain my glee!!!!

I hope Cruz is nominated! Oh what a wonderful gift to the Dems! I can hardly contain my glee!!!!

If he is nominated, he will win. Patriotism is contagious. Democrats have no one to catch it from.


Yes! I learned that lesson when McCain beat Obama to become president.

Yes! I learned that lesson when McCain beat Obama to become president.

Mc Cain was an establishment candidate. If you cannot see the difference between him and Cruz, try another subject. Politics is not your forte.
0 Replies