No charges have been filed against Winston, and the investigation remains active.

The complaint was filed Dec. 7, 2012, according to TPD reports. The complainant is cooperating with the State Attorney's Office, said Officer David Northway, spokesman for TPD.

"The case is open and active and the victim is working with the State Attorney's Office," Northway said.

The Catch puts Auburn in position to catch #1 Alabama as they meet in 2 weeks.

0 Replies
2
Reply Sun 1 Dec, 2013 11:49 am
The most amazing ending to a game! Alabama's missed field goal with 1 second left leads to a game ending 109 yd touchdown return for Auburn.
The BCS is staggered and it looks like the SEC's 7 year championship streak is over as Ohio State will be no. 2 and likely will play FSU in the championship.

it looks like the SEC's 7 year championship streak is over as Ohio State will be no. 2 and likely will play FSU in the championship


Don't count the SEC out yet. Ohio State still has to go on the road to East Lansing for the Big 10 Championship to face a Michigan St. team that has won all its conference games by double-digit margins. If the Buckeyes lose, then the SEC champion would play FSU for the national title.
1 Reply
1
Reply Sun 1 Dec, 2013 11:01 pm
@Kolyo,
I get it.
They were sayin a lackluster game against the Spartans and a blowout by Auburn might vault the Tigers into the championship.
Keepin' my fingers crossed for FSU vs Auburn
0 Replies
1
Reply Sun 8 Dec, 2013 11:12 am
And so it came to be...according to the wise man Kolyo

A fitting end to the experiment that was the BCS era.
The truly real powerhouse teams will meet in the championship.
The SEC vs the ACC
Florida State vs Auburn.
Somebody posted here that the SEC's power was waning....not so fast.
The odds makers have made FSU a 9.5 favorite though I would bet the house on Auburn covering that spread. All you have to do is watch local hero Tre Mason(Lake Worth Fl) run for 300 yds in a title game to know the Seminoles will have tough time containing him.
Any predictions?
1 Reply
1
Reply Sun 8 Dec, 2013 09:27 pm
@panzade,
panzade wrote:

The odds makers have made FSU a 9.5 favorite though I would bet the house on Auburn covering that spread. All you have to do is watch local hero Tre Mason(Lake Worth Fl) run for 300 yds in a title game to know the Seminoles will have tough time containing him.
Any predictions?


Well FSU struggles (to a degree) against teams with big bad offensive lines. That's what the commentators said during the Miami game. BC has one, and they gave the Noles more trouble than anyone else did. What kind of challenge Auburn will be able to mount will depend on whether they have a big punishing offensive line or not. Do they? Does anyone know? I know they have a heck of a running game, with over 500 yards on Saturday against Missouri, but I'm just wondering whether that's due more to the speed of their skilled position players rather than a big O-Line. The SEC commentators didn't talk much about Auburn's O-Line but rather about skill and finesse and the genius of their Triple Option offense. Still, I'd assume their lineman are pretty big and bad, just judging by the yardage they've been able to rack up against the SEC. I won't predict a winner, but I'll predict that Auburn will beat the spread.

What a game Ohio State vs. Michigan State was! I hope pan and others got a chance to see it. It was all about the elite Buckeye offense (possibly the most dynamic in the country) going against the elite Spartan defense (undoubtedly the best in the country). It was a game of thirds. Sparty shut down the Buckeyes early, going up 17-0. In the middle third, Ohio State didn't exactly "have their way" with the Spartan defense, but they managed to do just enough to keep driving until they'd racked up 24 straight points to go up 24-17. And then something weird happened. It was like the Spartans turned off the faucet that the Buckeye offense was flowing from. In the last third of the game. Ohio State got the ball in great field position repeatedly and did absolutely nothing with it every time. They had a monstrous O-Line and seemed to be able to get 3 or 4 yards at will for a while, but in the last third the Spartans toughened up and denied them first downs on very short yardage. And in the last third of the game it the Bucks weren't completing any passes either. Coverage was perfect.
1 Reply
1
Reply Sun 8 Dec, 2013 11:21 pm
@Kolyo,
Got to see the game, in a sense. I was on stage peeking out at a flat screen. All of a sudden a huge roar drowned out the band.
The Seminole fans were showing their appreciation to the Spartans for setting up a true match-up of champs.
0 Replies
1
Reply Tue 31 Dec, 2013 02:45 pm
<go, Bruins!>
0 Replies
1
Reply Tue 7 Jan, 2014 12:24 pm
FSU clearly deserves the No. 1 spot in the AP Top 25 poll and every other sort of college football ranking system under the sun. The team dominated throughout the 2013 campaign and capped off its run with a thrilling victory in the BCS Championship Game against No. 2 Auburn. 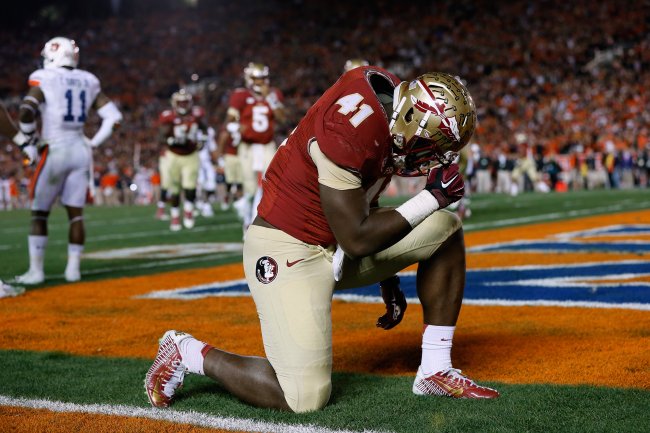 We thought Auburn might be a team of destiny, and they were, but unfortunately that "destiny" was to lose to Florida St.

I was cheering for Auburn, but I can't complain about the quality of the game, which featured 3 TDs in the last 6 minutes or so. It was right up there with the Rose Bowl and the Peach Bowl for down-to-the-wire excitement.

That was the biggest shock of all: how evenly matched they were. One team had totally dominated a cream-puff schedule; the other had eked out wins against a brutal schedule. One team featured a fairly traditional passing attack, with the wrinkle of mobile QB thrown in; the other ran a crazy triple option offence. They were so incredibly different that they might as well have been from different planets, and yet, in the end, the game wasn't decided until the last 30 seconds.
1 Reply
1
Reply Wed 8 Jan, 2014 10:38 am
@Kolyo,
good summation. The power of the SEC through the last 10 years was awesome.

That wasn't the case leading up to the big game.

Fisher says he kicked the Heisman Trophy-winning quarterback out of the final practice before the Seminoles left Florida to travel to California.

Fisher says he took issue with how Winston was performing during a two-minute drill and sent the quarterback to the locker room.

''The thing about two-minute that you've got to be real careful of, it's not about you,'' Fisher said Tuesday. ''You can get so involved that you're going to win the game - the key is to use all the weapons around you. He did that in that game.''

Thanks for chiming in K
0 Replies