Forums: Trayvon Martin, George Zimmerman, Murdered Child, Trayvon, High Profile Trials
Email this Topic • Print this Page
-2
Reply Fri 13 May, 2016 04:00 am
@oralloy,
It looks like they deleted one of the bots, but there was a second one (and who knows, maybe a third one after that). But maybe in awhile here they will have the auction fully repaired so we can see how the actual bidding is going.
1 Reply
-3
Reply Fri 13 May, 2016 04:29 am
@oralloy,
I can't tell if it's a real bid or not, but it looks as if there is a $485,000 bid on the gun that might not be from a bot.

Who knows, maybe five minutes from now that bid will have been deleted as a fake.

People are generally reluctant to mouth George Zimmerman’s name. Regardless of where one stands on the merits of his claim that he shot and killed 17-year-old Trayvon Martin in self-defense four years ago, he’s consistently proven himself to be a despicable human being after his acquittal for that shooting.

Even his most ardent defenders, those who can always be counted on to swarm talk radio with all manner of caterwauling defending his inalienable right to kill unarmed black kids, aren’t crazy about him anymore. Now widely regarded as a chronically unemployed drifter who is only one road rage or domestic violence incident away from his own demise, Mr. Zimmerman can only attract a fraction of the Internet trolls who used to fill the comments section of stories about the shooting with their own racial anxieties.

When your notoriety is based on a cowardly shooting nearly half a decade old and some assorted scrapes with the law, staying relevant in the age of Trump is harder than ever — especially when you don’t have a steady income. What’s clear to everyone, even to those who are sympathetic to him, is that George Zimmerman is unemployable. Even before the shooting of Trayvon Martin that made him a household name, he was only marginally employed. The only way someone like this guy can generate cash is to periodically prime the pump of public outrage.

Last year, the former cop-groupie-turned-artist tried his hand at painting for dollars. He sold canvases featuring the Confederate flag, a potent symbol of racial resentment and pride throughout the south. He experimented with monochromatic versions of Old Glory. His most outrageous painting featured the iconic, hooded portrait of Trayvon Martin superimposed on the American flag with thick, amateurishly rendered brush strokes. The idea that Trayvon’s killer was literally making money from his image disgusted many of those who previously defended him during his trial. It was clear that George Zimmerman was about as empathetic as a cockroach skittering over a wedding cake in view of horrified guests.

Between his short-lived stint as an artist and a violent confrontation with a motorist who shot at him in his truck last year, Mr. Zimmerman would periodically surface in the news like some unmentionable flotsam and jetsam in a backed-up sewer. Perhaps answering some primordial urge to disgust even more people, this week he announced that he would auction off the gun he used to kill Trayvon Martin. With an opening bid of $5,000, the auction was scheduled to take place at Gunbroker.com, the same site that sold targets made to look like Trayvon in 2012 before public outrage forced them to stop selling the targets.

“I am honored and humbled to announce the sale of an American firearm icon,” Mr. Zimmerman wrote in the post announcing the sale of the Kel-Tec PF-9 the Justice Department recently returned to him. “The firearm for sale is the firearm that was used to defend my life and end the brutal attack from Trayvon Martin on 2/​26/​2012.” He then added that the Smithsonian had expressed interest in acquiring the gun for its collection, but that great institution shot that down as a lie fairly quickly. He might as well have declared that the Museum of Modern Art and Louvre were interested in acquiring one of his Confederate clown paintings while he was at it.

National Review columnist Charles C.W. Cooke, who generally defends every citizen’s right to resort to Second Amendment solutions, said that Mr. Zimmerman “may have acted legally, but the man is a sociopath” — a perfect summary of the Florida shooter’s inability to retain human form before reverting to his natural lizard state whenever he opens his mouth.

His plan to auction the gun generated predictable outrage on social media, but Trayvon Martin’s family refused to rise to the bait. They dismissed the stunt and blatant cash grab out of hand and issued a statement reiterating their intention to focus on reducing gun violence in America.

For its part, Gunbroker.com never went forward with the auction, perhaps spooked at the prospect of being forever associated with a creep like George Zimmerman in the public imagination. By late afternoon, he had moved the gun to another auction site less obsessed with its reputation.

As of this column’s deadline, there were no reports that anyone had actually purchased the gun. It may take awhile or just a few hours. Because we’re thick in the swill of the emerging Age of Trump, it is more likely than not that someone will bid on the opportunity to own a piece of something that symbolizes the darkest heart of a racially paranoid and violent America. Before disappearing on the roads of Central Florida, Mr. Zimmerman has to hang around long enough to make just enough dollars to preclude the necessity of real work and finding a job.

Like the annual waves of rats and fleas that once carried the bubonic plague to Europe, George Zimmerman can be expected to return with even more heartless antics — until the karma that has long eluded him finally catches up with him.

Waiting for the announcement of nuptials to Tonya Harding or one of the Kardashians? Even THEY have some standards!

The only positive is if he does sell this gun, then the taxpayers will not have to support his a$$ as he is incapable of being employed.

The justice of the whole situation is also a positive. Mr. Zimmerman deserves to recoup all the losses that those BLM freaks caused him.
0 Replies
Below viewing threshold (view)
-6
Reply Fri 13 May, 2016 05:49 pm
@Ragman,
Ragman wrote:

I'm constantly amazed how he gets his ugly racist face in the news or some media outlet with such regularity.

You have a history of supporting injustice so your horrible attitude is no surprise, but I'd like to point out that no one can demonstrate a bit of racism on Mr. Zimmerman's part.
2 Replies
3
Reply Fri 13 May, 2016 08:11 pm
@oralloy,
Seeing that in over a decade of A2K participation I've never commented to you in any thread that you've been and we've never interacted, your claim to know anything about my views surprises me and puts your credibility in serious jeopardy.

As the previous article stated, even staunch Zimnerman and/or guns rights people have walked away from this man , refusing to discuss or defend his actions.

If you don't think Zimmerman is a racist mental defective and a killer, you've been asleep. Nite nite!
1 Reply
5
Reply Fri 13 May, 2016 08:32 pm
This animal getting away with that kind of murder lessens my respect for the human animal in more ways than I can enumerate.
1 Reply
5
Reply Fri 13 May, 2016 08:48 pm
@oralloy,
I used to be puzzled when my dad would say that the good lord made more horses asses than he made horses. Then I joined A2K and was exposed to guys like hawk, bill, and oralboy, my Dad was a wise man and he made it possible for me to recognize the difference. Shame on you oralboy, ragman rarely discusses the racist attitudes of this country, in fact I can't remember a single a time he ever ventured into the murky recesses of the racist mind.
It's time to realize that not everyone cheers when an underemployed wife beater with cop fantasies murders skinny 17 year old boys. It's sad that you cheer. It's sadder that you think this is a triumph and that the guy who ignores the police because those guys can't get results and only zimmy can detect a real threat to the community. I raised boys, and I know that perverts will target teen boys, and if I were the murdered child's mother I would have been warning him about fat sloppy men creeping up on him in the dark. I'll bet Zimmy supporters never entertained the thought that Zimmy was attempting a rape. I bet that thought crossed Trayvon's mind.
1 Reply
-3
Reply Fri 13 May, 2016 08:48 pm
@Ragman,
Ragman wrote:

Seeing that in over a decade of A2K participation I've never commented to you in any thread that you've been and we've never interacted,

your claim to know anything about my views surprises me and puts your credibility in serious jeopardy.

Logic not your thing?

Even if you really had never replied to me, that would not in any way prevent me from passing judgement on your despicable posts.

If you don't think Zimmerman is a racist mental defective and a killer, you've been asleep. Nite nite!

You're a monster who loves the idea of persecuting innocent people, so your despicable posts are no surprise.

I again point out that no one can demonstrate any racism on Mr. Zimmerman's part.

I also point out that no one can demonstrate that Mr. Zimmerman is mentally defective.

But I certainly have no trouble picturing you heaping horrible abuse on people that you believe to be mentally defective. In your eyes they must be the perfect victims.
0 Replies
-3
Reply Fri 13 May, 2016 08:51 pm
@edgarblythe,
edgarblythe wrote:

This animal getting away with that kind of murder lessens my respect for the human animal in more ways than I can enumerate.

Self defense is not a kind of murder.

0 Replies
4
Reply Sat 14 May, 2016 06:25 am
Many have been repulsed by George Zimmerman's decision to place the gun he used to kill unarmed Trayvon Martin up for auction... 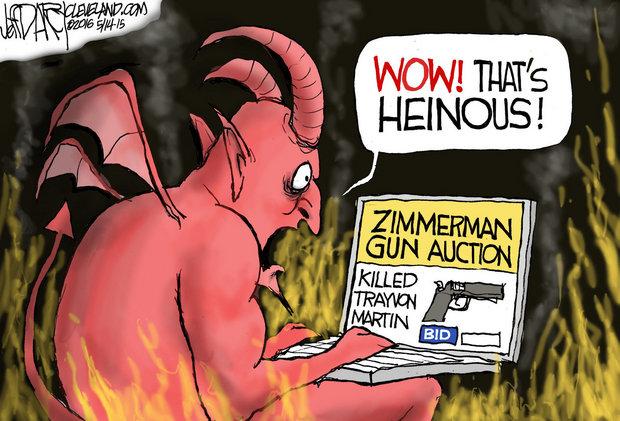 Nothing new to report regarding the auction unfortunately.

Unfortunately now there is something to report. It looks like the auction was just canceled.

I'm not sure what is going on. It might be that the auction is being moved to a more secure site where freaks can't disrupt it, or it might be that Mr. Zimmerman is back to square one. Hopefully it's the former.

Maybe Mr. Zimmerman can directly contact the person who bid $485,000 on the gun?
1 Reply
-4
Reply Sat 14 May, 2016 10:40 am
@oralloy,
I've got an update. The auction was temporarily withdrawn to remove the fake bidders. It will be relisted later this week for a shorter duration.


Also, a few hours before the auction was temporarily suspended, the guy who made the possibly-legitimate $485,000 bid left this public comment to the fake bidder kooks:

"All of you need to get lives. F***ing losers. I hope your children get murdered."

I didn't think it was too significant earlier, but now some of the kooks are whining because he wished dead children upon them, so I guess I'll mention it.

But they put some effort into the costume. It wasn't one of those home made costumes where the people put in as much effort as a Hollywood makeup artist, but it was still creative. And they did a good enough job that you could tell immediately that it was supposed to be Trayvon Martin and George Zimmerman.

Instead of "funny" I'd prefer the word that I used when I posted it: "cool". Or perhaps "neat".
0 Replies