Forums: Sports, Basketball, Nba, Ncaa, B-Ball
Email this Topic • Print this Page
1
Reply Wed 7 Mar, 2018 12:26 pm
@edgarblythe,
He’s as close to a completely dominating offensive force as I’ve seen. When he takes over, it’s over!
The criticism on defense is mostly overstated. He’s grossly under-appreciated on defense as he’s improving in general - lettting less opponents do blow-bys. He does force the kick-outs to the perimeters where tougher shots are located.

This is not to say he’s the only valuable player or that this team is lopsided and not competitive when he’s not on the court. Barring injuries they should go a long way in the playoffs. I like their chances.
1 Reply
1
Reply Wed 7 Mar, 2018 01:07 pm
@Ragman,
Harden has made me into a fan. I never did watch any complete games before he joined the team.
1 Reply
1
Reply Wed 7 Mar, 2018 02:29 pm
@edgarblythe,
Here's some analysis on trending of Rockets and their over-all chances in the playoffs (re against Warriors):

" Rockets went into the break with a 10-game winning streak and a 17-2 record over the last six weeks, ranking third offensively and seventh defensively over that stretch. Over the same six weeks, the Warriors had the league's best offense, but went 12-6 and ranked 16th defensively.

The Rockets are 28-1 with Chris Paul, James Harden and Clint Capela. Both Harden and Luc Mbah a Moute (Houston's best defender) missed their loss to the Warriors (who were playing without Kevin Durant) on Jan. 4.

Warriors coach Steve Kerr has made it clear that his team was fatigued over the last few weeks and needed the All-Star break. Time will tell if he was right, or if the wear and tear of three straight trips to The Finals affects their defense going forward."

I can't speak about the other teams stats but here are the numbers for career playoff games played by the current roster of Houston Rockets:

1 Reply
1
Reply Fri 9 Mar, 2018 02:41 pm
@Ragman,
Thanks Ragman. My team is the Thunder but the Rockets were for many years before. I only look for the Rockets to lose when the two teams play each other. The Rrockets are quit scrappy and I love scrappy. If youl look up scrappy in the dictionary, you will find a picture of Harden. I also love what Paul has done this year and bow he is used in the game.

Yes, the Rockets post season can probably be the most enjoyable set of series this year. I hope the Thunder and Rockets are on opposite sides of the Conference brackets so that maybe they could play each other to decide the Conference Champion.

But, the Thunder gotta get going if they are gonna make the playoffs. The Thunder have been very inconsistent all year long. They have shown they can beat anyone and then lose against the worst team in the league in the next game.

Westbrook jumped up for an uncontested defensive rebound with 8:30 remaining against
the Atlanta Hawks on Monday and leaped past Oscar Robertson in the history books to
become the NBA's triple-double king.

That simple rebound in the fourth quarter of the Wizards' 125-124 loss at Atlanta completed
a history-making triple-double that snapped a record many thought was previously unattainable
and had stood since Robertson recorded his 181st triple-double on March 24, 1974...

for the stat heads, he has had some eye-popping trip-dubs recently... 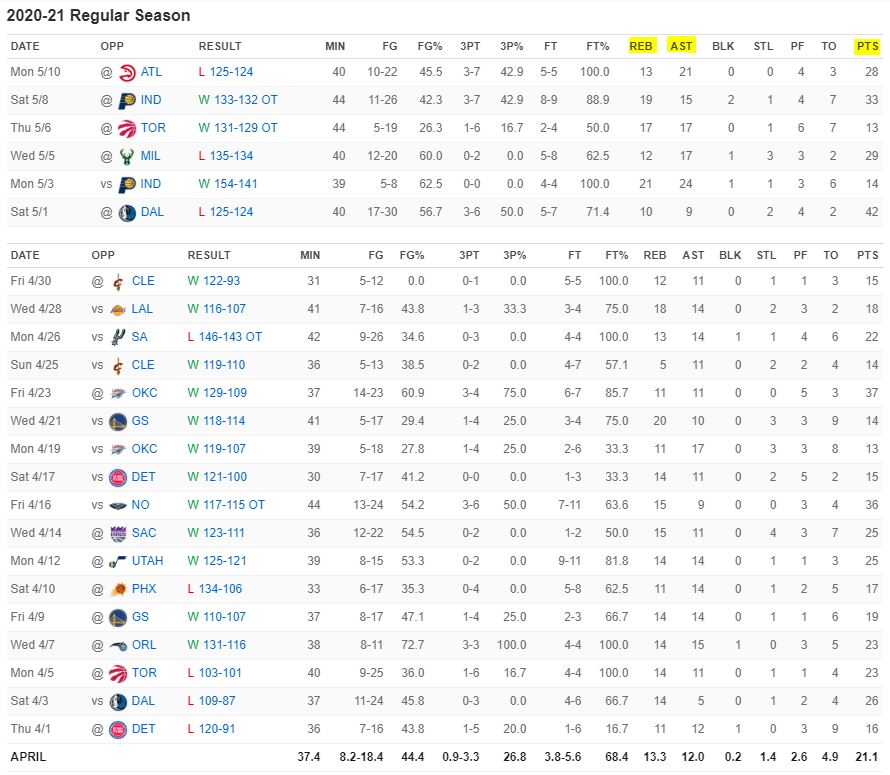 five are ahead of him on turnovers...

https://www.basketball-reference.com/leaders/tov_career.html
1 Reply
1
Reply Tue 11 May, 2021 12:43 pm
@Region Philbis,
Wow, that is a neat list. LeBron is kinda startling along with Michael Jordan and especially Clyde Drexler. Clyde always had his hand on the ball, with such a low count!
0 Replies