Having complained frequently about the media’s failure to report anything that might detract from their preferred narrative of Israel-as-villain, I’m delighted to discover that one British paper is bucking this trend. The Telegraph ran two articles this week describing the miserable situation in Hamas-run Gaza. And as reporter Phoebe Greenwood makes clear, the culprit isn’t Israel, but the elected Hamas government.

The first describes how Hamas has introduced military training into the curriculum of Gaza high schools–after having previously excised sports from said curriculum on the grounds that there wasn’t time for it. The mandatory weekly classes include learning how to shoot a Kalashnikov rifle; students who so choose can learn more advanced skills, like throwing grenades, at optional two-week camps. The article also includes video footage of Hamas militants demonstrating their skills for the students on a school playground: They carry out a mock raid on an Israel Defense Forces outpost, killing one soldier and capturing another, then demolish the outpost with a rocket-propelled grenade.

Needless to say, educating schoolchildren to view Israelis solely through the sights of a rifle doesn’t contribute to peaceful coexistence. And as Samar Zakout of the Gaza-based human rights groups Al Mezan noted, it also willfully endangers the students: If Hamas is using schools as military training bases, they could become targets for Israeli airstrikes in a future conflict.

But Hamas also engages in more direct forms of abuse, as Greenwood’s second article makes clear. It describes the victims of Hamas’s modesty patrols. In April alone, police arrested “at least 41 men” for crimes such as wearing low-slung pants or putting gel in their hair. Most were brutally beaten; they also had their heads forcibly shaved. One victim described being dragged into a police station and seeing “a mountain of hair, it looked like it had been shaved from 300 heads.” Another described being beaten on the soles of his feet with a plastic rod “for at least five minutes. I was crying and screaming with agony. It was the worst pain I’ve ever felt.”

Yet Greenwood’s articles, unsparing though they are, still leave out one crucial point: The situation isn’t much better in the Palestinian Authority-controlled West Bank. There, too, Palestinians are subject to arbitrary arrest for such crimes as insulting PA President Mahmoud Abbas on Facebook. There, too, Palestinian schoolchildren are taught to view all of Israel, even in the pre-1967 lines, as “stolen” Palestinian land that must be reclaimed someday. There, too, murderers of Israelis, like the one who killed a father of five this week, are glorified as “heroes”; the PA even gave the honor of launching its UN statehood campaign to the proud mother of four sons who are serving a combined 18 life sentences for murdering Israelis. It’s no wonder that, according to a new Pew poll, Palestinians are the biggest supporters of suicide bombings in the Islamic world.

This is the reality journalists and diplomats consistently ignore, because it disrupts their comfortable theory that Israeli-Palestinian peace could be made tomorrow if Israel would just cede a little more territory. But the truth is that Israeli-Palestinian peace will never be made until Palestinian leaders do two things: stop teaching their children that killing Israelis is life’s greatest glory, and start providing their people with a decent life instead. 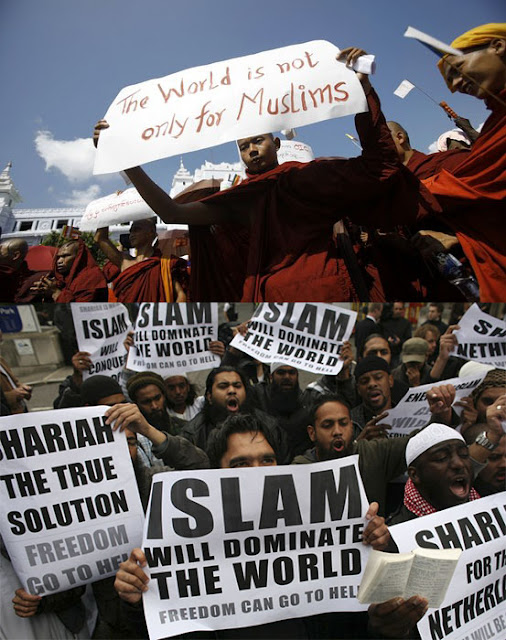 Is this an excuse for Israel bombing schoolchildren in Gaza ??

Targeting children is a Muslim thing. Israel doesn't do things like that.
2 Replies
0
Reply Thu 22 Jan, 2015 08:16 pm
@jft2,
Any other nation on Earth would have bombed Gaza totally flat by now.

In fact at the big military show in Paris last July the Israelis were sort of flummoxed as to why nobody was interested in Rafael's Iron Dome system which Israeli military planners view as top tech, and they asked several of their largest purchasers about it. The answer came back the same way from all sides:

Israel is the only nation on Earth which would tolerate an immediate neighbor firing rockets and mortars over the border at their cities or do anything as minimal as Iron Dome about it. Anybody else would simply flatten Gaza. In fact the technology to simply flatten Gaza is simpler and cheaper than Iron Dome.

Is this an excuse for Israel bombing schoolchildren in Gaza ??

Targeting children is a Muslim thing. Israel doesn't do things like that.

No. Targeting children is a Muslim thing. Israel doesn't do that.

Mikko Peled's book & video (A General's Son) explains how and that the IAF does exactly that.
https://www.youtube.com/watch?v=c4ZfnpN4Dfc

I did not see any details presented about Israel targeting children. All the guy did was note that children were killed in the bombardment of Gaza.

It is true that a few children were killed, although the true numbers cannot be ascertained because the Palestinians fake so many of the deaths. However, none of the dead children were intentionally targeted by Israel.

The Palestinians will instead have the right to vote in the new Palestinian state, whether it is composed of isolated Bantustans or is based on 1967 borders, when it comes into existence.
0 Replies