Is religion responsible for the opposition to peace in the Israel-Palestine conflict?

And yet you support the violent conflict (or at least one side of it).

That is an unfounded assumption. I am merely a spectator watching to see if things play out as predicted. So far they are.

And yet you support the violent conflict (or at least one side of it).

All you need to do in order to side with the Israelis is look at all the times Israel offered the Palestinians a fair peace, and the Palestinians responded to the peace offers by waging a war of annihilation against Israel.
0 Replies
3
Reply Fri 14 May, 2021 11:08 am
@Leadfoot,
Hardly disinterested, spouting lies and propaganda.
1 Reply
-2
Reply Fri 14 May, 2021 02:15 pm
@izzythepush,
Leadfoot's posts have been factually accurate.
0 Replies
2
Reply Sat 15 May, 2021 01:00 pm
The IDF has targeted the news organisations by bombing the building in Gaza where they are based.

The Associated Press is “shocked and horrified,” while Al Jazeera has vowed to continue reporting despite restrictions.
1 Reply
-1
Reply Sat 15 May, 2021 03:14 pm
@izzythepush,
Their pathetic whining is pretty funny. It really made my day.

1 Reply
0
Reply Sat 15 May, 2021 03:53 pm
@oralloy,
Didn’t you love the expertly covered and professionally photographed 'event' in that story. There must have been a hundred cameras focused on that building just before it was struck.

Think they were 'secretly' tipped off? Would you believe publicly tipped off?
It is pretty funny watching them straining to twist the story of what really happened.
2 Replies
-1
Reply Sat 15 May, 2021 04:02 pm
@Leadfoot,
Well Israel does warn non-combatants and give them time to evacuate before they bomb.

I actually haven't paid too much attention. I saw the headline and it made me smile, but that's about it.
0 Replies
2
Reply Sat 15 May, 2021 04:20 pm
@Leadfoot,
They weren’t secretly tipped off. The IDF told them to get out because they were going to bomb them.

That has been widely reported, the IDF don’t deny it.

Stick to the facts instead of pulling mental paranoid horseshit out of your arse.
1 Reply
-1
Reply Sat 15 May, 2021 04:54 pm
@izzythepush,
Is there any footage of the rats scurrying out of their ratholes with alarmed looks on their faces?
1 Reply
0
Reply Sun 16 May, 2021 06:19 am
@oralloy,
Izzy has a hard time absorbing more than one side of the story.

The head-fake story on ground invasion worked really well on the tunnel builders.
1 Reply
2
Reply Sun 16 May, 2021 06:32 am
@Leadfoot,
You are the one making up facts, and siding with the most repulsive poster on A2K in the process.

All those dead civilians must remind you of Vietnam, we had a hard time understanding why you had to kill so many children over there too.

Vikorr has already pointed out why everyone thinks it’s stupid.

The Jews are ready to come to agreement, provided they do have a defensible country of their own. The Muslims, however are not.

Muslim leadership thinks that Jews and Christians don't have a right to exist.

Don't believe me? Look at this Temple Mount overhead. 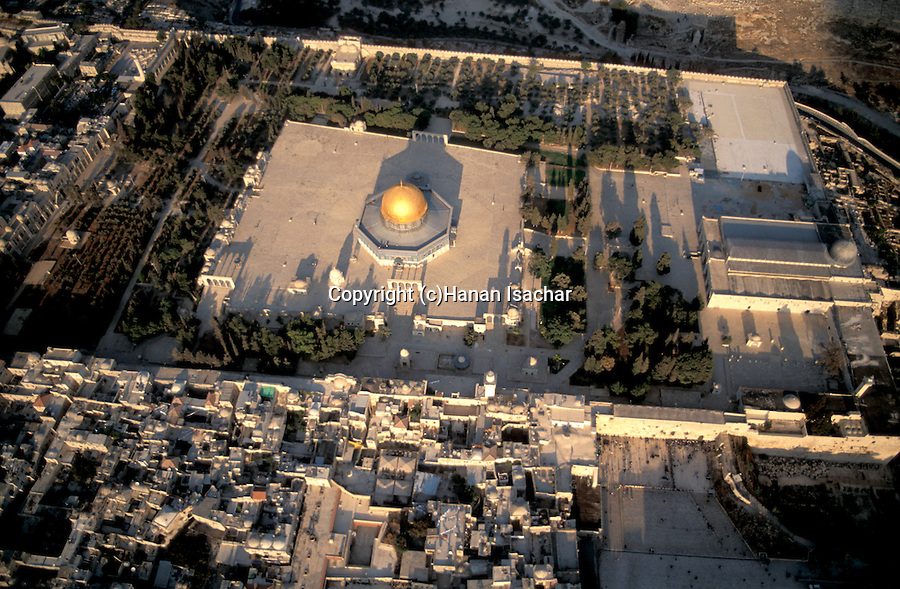 (This picture is for demonstration only, I do not claim any rights)

As you can see from this picture, the mosque there could be to the left or right. Instead, it is dead-center allowing no room for the Jews to build their own temple. In other words, in the holiest of holy places for Jews, they are not allowed to worship.

If Islam really respected "the People of the Book" as equals, they would give Bethlehem back to the Christians, and the Temple Mount back to the Jews, or at least share these landmarks.

Instead Bethlehem is a battleground, and the Temple Mount is off limits.

The Christians rightly support the idea of Jews having their own country. All except the same ilk that supported the Nazi regime.

I think I counted close to 40 countries with at least 80% Muslim majority. Does it seem fair that not even one Jewish country is allowed to exist without getting interference from Islam?

"We have enough Muslim countries now." This is what a group legit seeking peace would say. Yet, you blame the Christians for the failure to come to compromise. I'd love to see your thought process in this.
0 Replies

How can we be sure that all religions are wrong? - Discussion by reasoning logic
What if no religions are correct, but there still is a God? - Question by neologist
We are all like little children who often say: "Mom, Dad, leave me alone, I want to be on my own". - Question by Leaffan
Beyond tribalism; How well does your religious label serve you? - Discussion by MattDavis
Concern for Religious Freedom or Preaching Political Messages? - Discussion by wandeljw
Are atheists being more illogical than agnostics? - Discussion by igm
Why believe in god? The theist perspective. - Discussion by msolga
Why People Seek Solace In Gods. - Question by mark noble
Catholic remarried couples should abstain from sex - Question by Tes yeux noirs
How can a good God allow suffering - Question by SawyerMentink
Copyright © 2021 MadLab, LLC :: Terms of Service :: Privacy Policy :: Page generated in 0.03 seconds on 12/03/2021 at 05:12:43
▲ ▼