SPACE NEWS FROM THE ELECTRIC UNIVERSE

According to astronomers a recently discovered group of quasars is larger than anything previously believed possible, requiring a fundamental revision of cosmological theory. But perhaps the real mystery is how the scientific media failed to acknowledge that "discoveries" of this sort, based on a misunderstanding of redshift, were predicted by one of the 20th century's leading astronomers, Halton Arp.

Comparison to the standard model of Big Bang cosmology

Proponents of plasma cosmology claim electrodynamics is as important as gravity in explaining the structure of the universe, and speculate that it provides an alternative explanation for the evolution of galaxies[8] and the initial collapse of interstellar clouds.[19] In particular plasma cosmology is claimed to provide an alternative explanation for the flat rotation curves of spiral galaxies and to do away with the need for dark matter in galaxies and with the need for supermassive black holes in galaxy centres to power quasars and active galactic nuclei.[8][37] This is controversial, as theoretical analysis shows that "many scenarios for the generation of seed magnetic fields, which rely on the survival and sustainability of currents at early times [of the universe are disfavored]",[20] i.e. Birkeland currents of the magnitude needed (say 1018 Amps) for galaxy formation are thought to not exist.[16]
Light element production without Big Bang nucleosynthesis (as required in e.g. Alfvén-Klein cosmology) has been discussed in the mainstream literature and was determined to produce excessive x-rays and gamma rays beyond that observed.[40][41] This issue has not been completely addressed by plasma cosmology proponents in their proposals.[42]
In 1995 Eric Lerner published the only proposal based on plasma cosmology to explain the cosmic microwave background radiation (CMB) since the Cosmic Background Explorer (COBE) results were announced in 1992.[43] He argues that his model can explain both the fidelity of the CMB spectrum to that of a black body and the low level of anisotropies found. The sensitivity and resolution of the measurement of the CMB anisotropies was greatly advanced by WMAP. The fact that the CMB is so isotropic, in line with the predictions of the Big Bang model, was subsequently heralded as a major confirmation of the Big Bang model to the detriment of alternatives.[44] These measurements show the acoustic peaks in the early universe are fit with high accuracy by the predictions of the Big Bang model. There has never been an attempt to explain the detailed spectrum of the anisotropies within the framework of plasma cosmology.

Summary: No theory in cosmology explains everything. But based on experimental evidence, the Big Bang Theory currently fits a wide range of observations more accurately than any other theory.
1 Reply
1
Reply Tue 5 Feb, 2013 01:38 pm
@rosborne979,
The Big Bang idea is bad physics and bad theology rolled into a package. Having all the mass of the universe collapsed to a point would be the mother of all black holes, nothing would ever "bang" its way out of that.

Likewise for a supposedly omniscient and omnipotent God to suddenly, at some specific point in time, decide it would be a cool thing to do to create a universe whereas the idea had never occurred to him prior to that moment, is basically idiotic and it doesn't even matter whether the moment in time was 6000 or 17 billion years ago.

That's before you even get to Halton Arp and the question of demonstrating high and low redshift objects which are clearly part and parcel of the same things. That annihilated the basis for an expanding universe along it the need for any sort of a big bang theory.

Big Bang is junk science, nearly as bad as evolution itself.


A couple of Arp's examples: 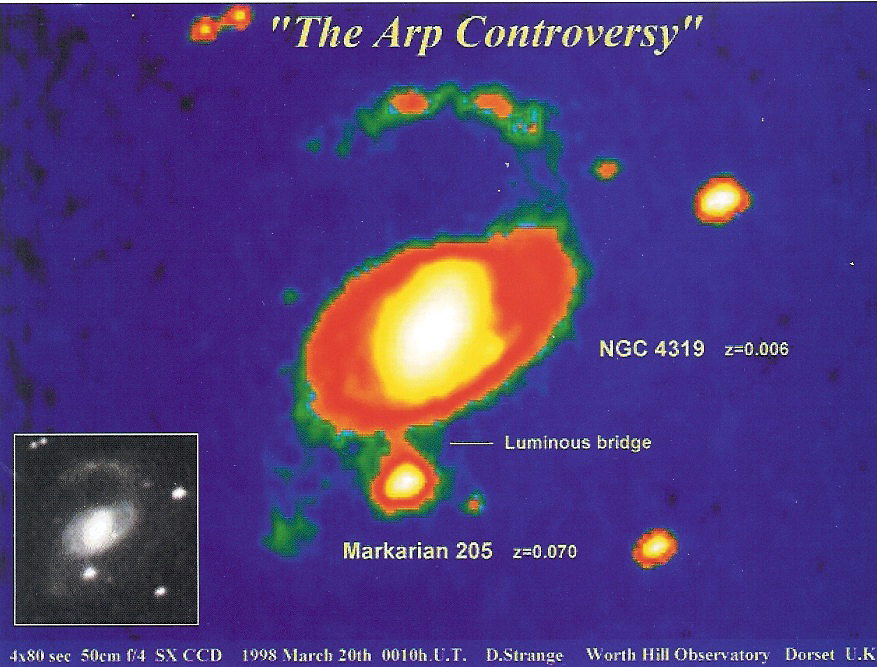 Also, the Idea that there could be such a thing as an "exception which proves the rule" is basically an ignorant misuse of language. The original version of that statement was Latin for "an exception probes (or calls into question) the rule"; this is the familiar concept from mathematics that a single counterexample suffices to disprove a rule or, more properly, a thesis which somebody had proposed for consideration as a rule.

The Big Bang idea is bad physics and bad theology rolled into a package. Having all the mass of the universe collapsed to a point would be the mother of all black holes, nothing would ever "bang" its way out of that.


You keep repeating that, but it's not an accurate way of describing the conditions described by the Big Bang theory, so it's a little like making up your own theory, calling it something popular and then saying the popular thing is invalid because your own theory (that you made up) is invalid.
0 Replies