To my knowledge this is strictly a NASA project.
1 Reply
2
Reply Sun 20 Jan, 2013 10:40 am
@Ragman,
They don't tell you everything. Many parts and equipement are supplied by the ESA.
Even more on the next Rover mission..

ESA has found some water signs on mars.. do u guys blv is that realy water signs?


An Aquarius, huh?
0 Replies
1
Reply Wed 21 May, 2014 01:03 pm
This is as good a place as any for what i want to post. About a dozen years ago, Kim Stanley Robinson began publishing his Mars trilogy--Red Mars, Green Mars and Blue Mars. He makes a lot of statements about areology (i.e., the "geology" of Mars), and recently, i've been checking up on his claims. He's damned good. So, here are some features of Mars that are truly amazing, and which i think are worth checking out.

Let's start with the Tharsis bulge. First things first, though. Giovanni Schiaparelli was an Italian astronomer of the 19th century who named many of the features he saw on Mars. He used a bewildering array of Greek, Roman and biblical names. He also referred to channels on the surface, which modern research is confirming are very likely hydrological or glacial features. Unfortunately, his term, canali, which is Italian for channels, was translated into English as canals, leading to all manner of idiocy.

His name Tharsis is based on the biblical name Tarshesh, which was the name of the western extremity of land on earth. The Tharsis bulge is sometimes called a continent. That is not unreasonable, as it is about as large as North America. It rises to seven kilometers above mean surface level for the northern hemisphere of Mars (more about that later), which is a dozen yards short of 30,000 feet. That means that the plateau rises higher above the surrounding terrain than Mt. Everest rises above sea level on earth. Get used to that, the dimensions of areological features commonly dwarf similar features on Earth.

The Tharsis bulge is interesting for another reason, though, and that is the four great volcanoes of Mars. There are literally hundreds of extinct volcanoes which have been identified on Mars, but these four dwarf anything found elsewhere in the solar system (as far as we know). So, on to the great volcanoes.
0 Replies
2
Reply Wed 21 May, 2014 01:30 pm

On the image, the red and burgundy areas show the Tharsis bulge. The four "purple pimples" are the four great volcanoes. The three in a row running from south-southwest to north-northeast are known as the Princess volcanoes--Arsia Mons (named after a forest near Rome), Pavnois Mons (Peacock Mountain) and Ascraeus Mons (Ascra is the birthplace of the ancient Greek scholar and philosopher Hesiod). Just to the northwest of the Tharsis bulge is Olympus Mons, the highest known mountain in the solar system (with an elevation more than three times greater than Everest) and the largest volcano known in the solar system. The largest volcano on Earth is Mauna Loa on the big island of Hawaii. Olympus Mons is one hundred times as massive as Mauna Loa. The rim of it's caldera reaches above the Martian atmosphere, menaing that in Martian terms, it reaches into outer space. The Princess volcanoes are so named in deference to Olympus Mons, the "king" volcano.

All three of the Princess volcanoes show evidence of hydrological and of glacial flows to the east-southeast. Roswell alluded earlier in this thread to the amount of water on Mars, and the evidence from the Princess volcanoes is that there is a great deal indeed. The evidence on the surface of flow channels, and of flow channels in the Valles Marineris suggests as well as the evidence for the Noachian age on Mars suggests that three billion to four billion years ago, Mars had much denser atmosphere and a great deal of liquid water on the surface. (Uncannily, Schiaparelli named a pockmarked plane to the southeast of the Valles Marinaris the Noachian terra, meaning before the flood, a reference to Noah, and hence, the Noachina Age.) Many geologists now believe that there were extensive glaciers running east-southeast from the Princess volcanoes in the post-Noachian period, and some believe that the glaciers are still there, frozen in and beneath the regolith, and perhaps as much as a hundred meters thick (about 310 feet). Here is a paper, in PDF format, entitled "Recent glaciation at high elevations on Arsia Mons, Mars: Implications for the formation and evolution of large tropical mountain glaciers." (Don't be distracted by the term "tropical." It just means that Arsia Mons is actually just south of the Martian equator. It only means tropical in the sense of being near the equator.)

All four of these volcanoes dwarf any mountains you can think of on Earth.
1 Reply
2
Reply Wed 21 May, 2014 01:56 pm
@Setanta,
I assume the color "layers" are calibrate to be reflective of different topographic elevations. White=highest down to tones of blue at the base level

Its interesting to see the grey layer that lies just below the peaks and culd account for water retention and these act as the headwaters of "trellis " style drainage coming off the uplands. The anvcient streams were probably high energy because they are so strait and probably are controlled by several fracture linaments.Then,when the streams reached a base level, it looks like they dissipated thir energy by turning into alluvial fans of some size. Id head right down to those alluvial fns and start prospecting.

Mars had lost its "dynamo" core quite early so any spreading centers died early in Martian geohistory
1 Reply
2
Reply Wed 21 May, 2014 02:04 pm
Southeast of the Valles Marineris lies the feature which Schiaparelli named the Noachian terra.

The light colors, yellow and red, are higher elevations, the dark colors, green and blue, are lower elevations. As you can see, the surface of mars was once a shooting gallery. A good many of those impacts may have been ejecta from "the Big Hit," which i will get to a little later. The dark feature to the south east is the Hellas Basin (Hellas is the name the Greeks give to their own country).

The green and blue area is the Hellas basin. The dark feature at the bottom is the Martian south pole. It is an impact crater which makes the Chicxulub crater on Earth look like a puddle. It is about 2500 kilometers in diameter (depending on how one defines the basin), which is over 1200 miles. If it were in the middle of the United States, it would reach from Denver to Louisville.

It is possible that the Hellas basin is not the largest impact crater on Mars. The Daedalia Planum, south of Tharsis, may well be an impact crater about 4500 kilometers in diameter--wider than the continental United States. It has been obscured by later strikes and whatever event lead to the rise of the Tharsis bulge. 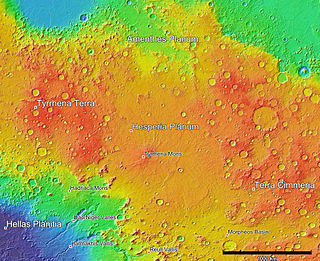 1 Reply
1
Reply Wed 21 May, 2014 02:07 pm
@farmerman,
Yes, the channels which you call trellis style are referred to in the literature as braided channels.

As for early Martian geohistory and spreading, the "Big Hit" is an interesting hypothesis on what happened to the planet.
1 Reply
1
Reply Wed 21 May, 2014 02:32 pm
Well, thanks to this idiot web site, i 've just lost a huge post on the Vastitas Borealis. I may wait until tomorrow to attempt it again. In it, i will explain the "Big Hit" thesis.
0 Replies
2
Reply Wed 21 May, 2014 04:01 pm
@Setanta,
Its definitely braided down at the lower elevation where the streams weave and interlock. At the hedwaters its really trellis (stream channels are parallel to each other )
1 Reply
2
Reply Wed 21 May, 2014 04:28 pm
@farmerman,
I wonder what is "Base level" on Mars? We use Tidal gage 1 on the Cape Charles bight all other USGS elevations are wrt to that one(they all fit to the reference geoid of the planet). We do satellite elevation mapping and everything is +/- wrt the bench mark on gage 1 and the reference geoid.

Itd be neat if they marked the location so that if others are doing martian geomorphology the elevations would be uniform.
1 Reply
2
Reply Wed 21 May, 2014 04:38 pm
@farmerman,
Don't know if it is what you are asking but the zero altitude datum for Mars (which is based on mean radius) is 3382.9 kilometers (from center of planet). 3382.9km from Mars "center" = 0 foot elevation.
2 Replies
2
Reply Wed 21 May, 2014 04:43 pm
@Setanta,
It's also interesting to note that the surface of Mars has not been as geologically active as Earth, so Mars retains many of the impact craters from much earlier in its life. On Earth these same craters have been erased or eroded by geologic activity.
1 Reply