Forums: Lyrics, Music, Word Play, Descriptions, Lyric Hunt
Email this Topic • Print this Page
Reply Tue 18 Dec, 2012 02:00 pm
Someone (Mr. B) changed my usual Pandora station to one with a strange, eclectic mix of music (I like it!)

The T-Rex song "Bang a Gong" came on and I was hit by the strange description "you've got a hub cap diamond star halo" so I started thinking about other unusual descriptions in lyrics.

And there she was, like disco lemonade (Sex and Candy -- Marcy Playground)

You know -- lyrics that you understand without having any idea what they mean.

You see it really doesn't matter
When you're buried in disguise
By the dark glass on your eyes
Though your flesh has crystallised
Still...you turn me on

The mansion is warm, at the top of the hill
Rich are the rooms and the comforts there
Red are the arms of luxuriant chairs
And you won't know a thing till you get inside

Dead president's corpse in the driver's car
The engine runs on glue and tar
Come on along, not goin' very far
To the East to meet the Czar

Some outlaws lived by the side of a lake
The minister's daughter's in love with the snake
Who lives in a well by the side of the road
Wake up, girl, we're almost home

The calliope crashed to the ground

soon after there's this oddness:
Some silicone sister with her manager mister told me I got what it takes
She said I'll turn you on sonny to something strong play that song with the funky break
And go-cart Mozart was checkin' out the weather chart to see if it was safe outside
And little Early-Burly came by in his curly-wurly and asked me if I needed a ride.
and of course continues with:
Some brimstone baritone anticyclone rolling stone preacher from the east
Says: "Dethrone the dictaphone, hit it in its funny bone, that's where they expect it least"
And some new-mown chaperone was standin' in the corner, watchin' the young girls dance. And some fresh-sown moonstone was messin' with his frozen zone reminding him of romance.
1 Reply
2
Reply Tue 18 Dec, 2012 05:00 pm
@boomerang,
"Fire" by The Incredible World of Arthur Brown

You fought hard and you saved and learned,
but all of it's going to burn.
And your mind, your tiny mind,
you know you've really been so blind.
Now 's your time burn your mind.
You're falling far too far behind.

You've been living like a little girl,
in the middle of your little world.
And your mind, your tiny mind,
you know you've really been so blind.
Now 's your time burn your mind,
you're falling far too far behind.

an italian singer I love, the sounds, his voice on a couple of cds, his interesting history - Fabrizio deAndre; he was respected there as a poet and for other reasons.

I've looked up translations, and at least once thought the online translations were so miserable that I tried it myself (I took seven quarters of italian, but later in life with a sieve mind). Took me something like a half hour to "improve" it in english, but it was doable.
But that's not the cut I'm talking about.

One of my favorites, Coda de Lupo*, is found online translated as

When I was a child I fell in love with everything, I ran after dogs
and from March to February my grandpa watched over
the stream of horses and cows,
over my affairs and your affairs:
and never believe in the god of the English

And when I was two hundred moons old, maybe more, maybe less,
I stole my first horse and they made me into a man
I changed my name into Wolftail,
I changed my poney for a dumb horse
and never believe in their losing god

It fell about in the night of the long-tailed star,
we found grandpa crucified on the church,
crucified with forks that are used for dinner,
he was dirty and clean with blood and with cream
and never believe in their greedy god

I was eighteen or so and didn't smell of snake anymore
I had an iron bar a hat and a sling
and one gala soirée, with a sharp-edged stone
I killed a tuxedo and stoled it to him
and never believe in the Scala god

Then we came back to Brianza to open buffalo shooting
they made us breath and urine tests,
we were explained the thing by an Andalusian poet,
"for buffalo shooting", said he, "there's numerus clausus"
and never believe in a happy end god

I was already old when near Rome, in Little Big Horn,
a short-haired general made us a college speech
on our brothers in blue overalls burying their war axes
but we didn't smoke with him, he didn't come in peace
and never believe in a working-hard god


*I liked this for years sans knowing the translation, before I looked it up.
Recently, I got this wolfie looking dog, Katy, and played it for her. As I remember, she left the room.

I think I understand it somewhat, and the context.

This wiki is worth the read:
http://en.wikipedia.org/wiki/Fabrizio_De_André

"You can checkout any time you want, but you can never leave."

Just thinking of "Lucy in the Sky with Diamonds" has a lot of crazy descriptions. I've always been partial to "kaleidoscope eyes".
1 Reply
2
Reply Thu 20 Dec, 2012 10:51 am
@boomerang,
Golden Earring, a Dutch group which was formed before the Beatles, and which is, the last i knew, still in business, is one of the prime provider of bizarre lyrics. The entire song Twilight Zone is pretty damned odd, but i'll just post the chorus:

Help, I'm steppin' into the twilight zone
Place is a madhouse, feels like being cloned
My beacon's been moved under moon and star
Where am I to go now that I've gone too far?

I've been drivin' all night, my hand's wet on the wheel
There's a voice in my head, that drives my heel
It's my baby callin', says, "I need you here"
And it's half past four, and I'm shifting gear

When she gets lonely and the longing gets too much
She sends a cable comin' in from above
Don't need no phone at all
We've got a thing that's called radar love
We've got a wave in the air, radar love

When I get lonely, and I'm sure I've had enough
She sends her comfort, comin' in from above
Don't need no letter at all
We've got a thing that's called radar love
We've got a line in the sky, radar love 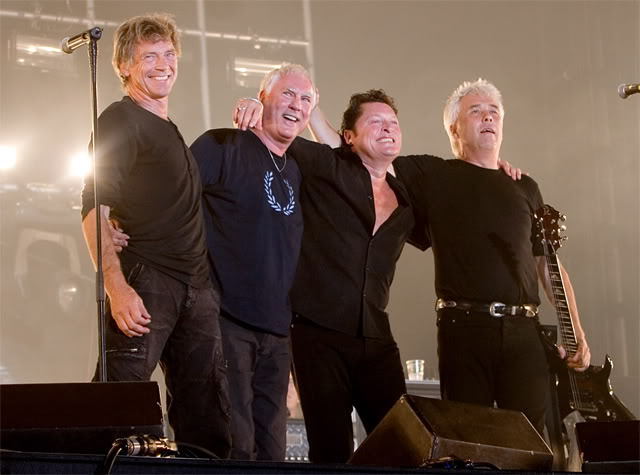 From the same song

"Every day a little sadder,
A little madder,
Someone get me a ladder."

Now those are lousy lyrics.
0 Replies
1
Reply Sat 22 Dec, 2012 01:12 am
@boomerang,
In love pool eyes float feathers after the struggle.
The hopes burst and shot joy all through the mind
Sorrow more distant than a star.
Multi colour run down over your body,
Then the liquid passing all into all
Love is hot truth is molten.

True true, true true the song he sang her while the leaves cooked
Ting ting, ting little bell he rang her, sleepily she looked.
He filled, he filled a leather cup, holding her gaze
She took, she took a little sip while this song he sang:

She comes in colors everywhere;
She combs her hair
She's like a rainbow
Coming colors in the air
Oh, everywhere
She comes in colors
0 Replies
1
Reply Sat 22 Dec, 2012 06:35 am
@Setanta,
radar love is my favourite driving song ever, cruising down a highway late at night with it blasting is the best way to hear it
1 Reply
1
Reply Sat 22 Dec, 2012 06:57 am
@djjd62,
Or, as the Moody Blues said:

And you can fly
High as a kite if you want to
Faster than light if you want to
Speeding through the universe
Thinking is the best way to travel
0 Replies
1
Reply Sat 22 Dec, 2012 05:56 pm
@boomerang,
A seasoned witch could call you from the depths of your disgrace,
And rearrange your liver to the solid mental grace,
And achieve it all with music that came quickly from afar,
Then taste the fruit of man recorded losing all against the hour.
And assessing points to nowhere, leading ev'ry single one.
A dewdrop can exalt us like the music of the sun,
And take away the plain in which we move,
And choose the course you're running.
0 Replies
1
Reply Sun 23 Dec, 2012 04:05 pm
@boomerang,
@all

"In Dreams" by Roy Orbison

A candy-colored clown they call the sandman
Tiptoes to my room every night
Just to sprinkle stardust and to whisper:
"Go to sleep, everything is alright"