Can humans be divided ito subspecies?

Forums: Science, Classification, Race, Genus, Species
Email this Topic • Print this Page
1
Reply Fri 31 Aug, 2012 11:43 am
@spendius,
Gunga believes whatever strange conpiracy theory is doing the rounds at the moment. If he was at all interested in the truth, he wouldn't have posted his ridiculous apeman pictures and claimed that's what Neanderthals looked like. This is what they really looked like. 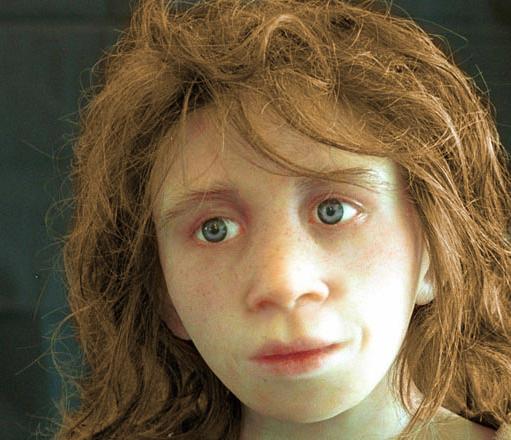 When he spoke about the anthropomorphic bias in facial reconstruction, I kept thinking that a good way to demonstrate that would be to dress a chimp skull with those reconstruction techniques he mentions.
2 Replies
2
Reply Fri 31 Aug, 2012 06:27 pm
@Cyracuz,
Forensic evidence is what Vendramini has totally ignored. Gunga is easily distracted by shiny objects and cartoon representations of science. Its often less entertaining to go through the drudge work that verifies the real scientific views and that violates gungas ADD directed mind.
Neandertlas did NOT look like apes, They also had a sris of genes that are consistant with speech

a complete skeleton from Mesnaskaya cavern was constructed by paleoanthropoligists using bone on bone assemblies . The reconstruction has been made with careful concern to mucle insertions evidenced by striations on the bones. The Vendramini model shows a hairy, dark skinned stooping APE. As you can see the "upright" config of the below skeleton is hardly an ape


Also there is a gene for coding the melanocortin receptor, called MRC1. The neanderthal version of this receptor was sequenced from 2 different specimens of neanderthal (El Sidron 1252, and Monte Lessini 3) The sequencing discovered mutations in the MRC1 recptor. This is similar to the same alleles in Northern European humans. With these mutations ina ll of the samples It becomes evident that this receptor results in neanderthals with Red Hair and very pale skin. Paabo theorizes that the northern population of neanderthals were exceedingly efficient in metabolizing vitamin D in the low sunlight/

Vendramini is just trying to sell comic books and gunga is helping him/ very "hit" Vendramini gets on places like this, he is able to capitalize by selling his self published bullshitAs Isaid before, gunga is easily distracted and he likes shiny bits of gum wrappers over meat and taters
2 Replies
0
Reply Sat 1 Sep, 2012 03:31 am
@Cyracuz,
The whole thing seems to have started with Vendramini noticing something which somebody should have figured out from day one when they first started studying Neanderthal remains:

That is, the Neanderthal skull is a near perfect fit for chimpanzee profiles and a very bad fit for one of ours.
3 Replies
0
Reply Sat 1 Sep, 2012 03:37 am
Note also the funnel-shaped rib cage in the skeleton Formerman refers to above. That's basically to make room for the gigantic upper body musculature associated with primates. Human rib cages are cylindrical and not funnel-shaped.
0 Replies
2
Reply Sat 1 Sep, 2012 04:40 am
@gungasnake,
I have a really nice bridhe Im trying to sell to some discerning buyer.

Vendramini got it all wrong by "forcing " the neanderthal skull into that cartoon.

As far as the rib cage, so wahat? Variation in humans and autopomorphic effects have human rib cages vary jut as much to produce a barrel chest.
Another reason is tht all neanderthal skeletons had to be excavated and

great care must be taken when excavating the ribs. I have carried out micro-excavation of juvenile remains, (when I volunteered at Humber Field Archaeology) that consisted of the vertebrae, half of the ribcage and parts of the pelvis in-situ, and it took a while. During excavation of human remains on site, it is very unlikely that the rib cage will be in its natural anatomical position. Due to the soil and weight of the earth above the body, and the movement in the intervening period between burial and excavation, the ribs are likely to be broken and misplaced. As always keep a look out for finer skeletal finds.

1 Reply
0
Reply Sat 1 Sep, 2012 05:36 am
@farmerman,
fm is continually fond of declaring that others are easily distracted by shiny objects and cartoon representations of science because such declarations imply, indeed are taken as proof by many persons in whom the traits and limitations of a puerile mentality persist beyond adolescence, that he is not subject to the lamentable state to which he refers.

The successful promotion of the self in this way is usually accompanied by a rather exaggerated truculence in proportion to the felt need for the denial.

The above post displays considerable evidence of the mental states referred to as well as the usual pyrotechnical exhibitions of the scientific absurdities invariable found in over-simplifications of the grosser sorts where the psychic income, or the prestige value to be found in intangible goods, is the prime, possibly the only, consideration.

But so long as the reconstruction has been made with careful concern to mucle insertions evidenced by striations on the bones I don't suppose we ought to be too concerned.
0 Replies
0
Reply Sat 1 Sep, 2012 05:58 am
@farmerman,
Cor blimey fm!! Not another bridge sale. Can't you think something up more original than that? I know Setanta can't but I expect better of you.
0 Replies
1
Reply Sat 1 Sep, 2012 06:03 am
@farmerman,
You seem to have a lot more information about this that I do.
As I watched the video Gunga supplied, I thought that the anthropomorphism Vendramini said lay in our reconstruction methods sounded very plausible. He does have a point in that if we use modern facial reconstruction that was developed for use on human skulls, we are likely to get something that looks human.
I admit that the black skinned, fur monster that hunted, ate and raped humans does sound like the perfect horror story, and is appealing only for that reason.

But when you say that neanderthals did not look like apes, I understand what you mean, and yet I think that even modern humans look like apes. After all, we are apes.
2 Replies
-2
Reply Sat 1 Sep, 2012 06:45 am
@Cyracuz,
Rob Gargette, (the Subversive Archaeologist) notes that if you draw a more human-like Neanderthal with the eyes and nose as big as the skulls indicate they would have to be, what you end up with is outlandish:

Subversive Archaeologist Blogspot (http://thesubversivearchaeologist.blogspot.com/)
1 Reply
-1
Reply Sat 1 Sep, 2012 06:49 am
@gungasnake,
That's not outlandish. It's how I imagine fm to look when he's trying to convert the faithful.
0 Replies
2
Reply Sat 1 Sep, 2012 07:48 am
@Cyracuz,
but we dont really look apish as Vendramini insists. The mere errors of his vertebral insertions and mtDNA issues go against Vendraminis ideas (coined just to sell "sci fact stories"

He )Vendramini_) self publishes and has a small pub house making his comics and hes in the process of a movie. REMEMBER, its entertainment , not science. Gunga is just confusing the two.

His "theiry" is about a decade old and has no credible scientist even bothering with it. We know that what Vebdramini says *the evidence that is) does NOT support hi stories
1 Reply
0
Reply Sat 1 Sep, 2012 08:07 am
@farmerman,
That's amazing. Thank you for the incisive insights it contains into human nature.

Is Mr Vendramini unique in any way as a social operative picking his way through this woeful and weary world of woe using the techniques which he must have discovered work for him. The manifold differences in technique are merely a matter of personal taste and, as such, subject to the usual class distinctions and the affected snobberies they conjure into existence.

......We know that many closely related species in primates, for example, can interbreed. Various species of monkey can interbreed and have fertile offspring, and so can our closest living relatives, Bonobos and common chimpanzees.......

The whole thing seems to have started with Vendramini noticing something which somebody should have figured out from day one when they first started studying Neanderthal remains:

That is, the Neanderthal skull is a near perfect fit for chimpanzee profiles and a very bad fit for one of ours.


As has been pointed out where the spine connects to the skull would make it impossible for it to fit as shown.

Look at the auditory opening on the skull compared to the ear on the ape. Ears are attached to the opening in the skull because that is the way they work. 0 Replies
2
Reply Mon 17 Sep, 2012 09:30 am
@gungasnake,
If you're going to talk about skulls why not provide images of a chimp skull and a modern homo sapiens skull as well?

I don't know about you, but to me the human skull is much more similar to the neaderthal skull than it is to the chimpanzee skull.
1 Reply
1
Reply Mon 17 Sep, 2012 09:39 am
@InfraBlue,
GUNGA only focused on the single skull that his mentor used. The statistical variation of neanders is skewed much more closely to H sapiens Idaltu than to any "monkey butt"
1 Reply
4
Reply Mon 17 Sep, 2012 09:47 am
@farmerman,
You're saying that Gunga's evidence is flawed, that he deliberately ignored huge amounts of data in order to make a point? Surely not.

This has really shaken my faith in humanity. Do you think he might have done this before?
1 Reply