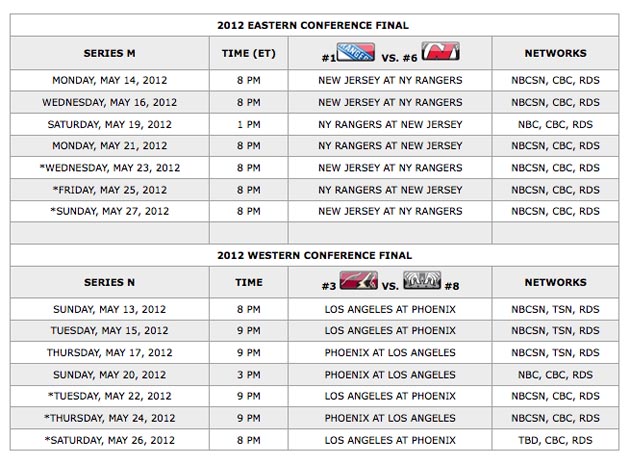 Can't believe they only have one East Conf game on NBC
1 Reply
2
Reply Mon 14 May, 2012 06:26 am
@panzade,
Network TV goes by their Neilsen ratings. Shockingly, beyond the northeast and Canada, NHL Hockey doesn't have the TV audience mass appeal. As near as I can tell, in the final round of the Stanley Cup they do.

One would think the semi-final series with NY Rangers and NJ Devils would be more highly watched.

According to their (NBC) publcity page the televised coverage looks like this:

For the first time in the 95-year history of the NHL, every Stanley Cup Playoff game will be televised nationally. The NBC Sports Group will provide unprecedented access to the NHL Stanley Cup Playoffs in April, May and June, televising as many as 105 playoff games and possibly more than 262.5 hours of programming. Games will be presented on NBC, the NBC Sports Network, the NHL Network, and NBCUniversal’s business channel CNBC in primetime.

If you aren't finding this channel, you might get help from local cable provider. The answer I got when I looked it up on Verizon FIOS web page. I get it with my non-premium channel coverage. I don't have a special sports pkg. The other local cable providers are also carrying it (Comcast etc.) not as a sports special pkg.

"But there is also Universal Sports that used to be carried as a sub channel to NBC stations.

They have removed it and are trying to get cable companies to carry it as a independent channel (not a local channel)." 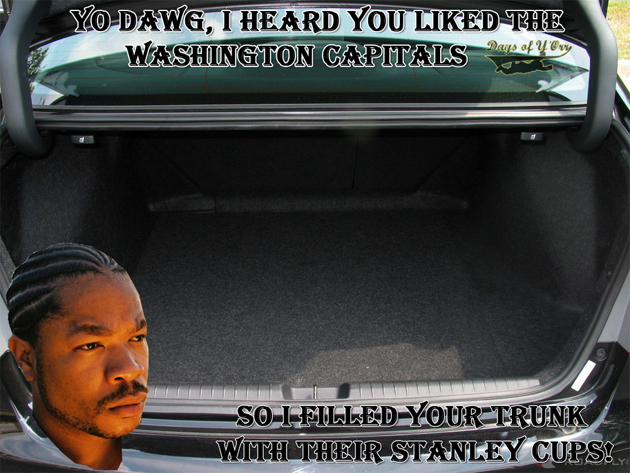 0 Replies
4
Reply Sun 3 Jun, 2012 07:48 pm
I predicted the Los Angeles Kings would beat the New Jersey Devils in 5 games in the Stanley Cup Finals. I think I gave New Jersey too much credit. This could be done in a 4-game sweep. It will be LA's first Cup since entering the league in 1967. It will leave the St. Louis Blues as the oldest team without a Cup. (They also entered in '67.) And 1967 was the last year Toronto won... just had to mention that.
2 Replies
1
Reply Thu 7 Jun, 2012 12:02 pm
@JeffreyEqualityNewma,
Your prediction will be right on the money I think.
The Kings are a stealth hockey team . I didn't see them coming.
1 Reply
1
Reply Sun 10 Jun, 2012 06:25 am
@panzade,
Apparently Jeffrey's prediction didn't come true.

I'm reading the History of the National Hockey League on Wikipedia and now for the first time in the last several weeks, I drifted into a daydream in which I was near the Canadian pavilion at Epcot. I really miss Disney World but I kinda want someone special to go with. I need to erase the memories of last October. At the time, it was the happiest weekend of my life. Now it's just a bitter memory.
0 Replies
1
Reply Mon 11 Jun, 2012 06:05 pm
@JeffreyEqualityNewma,
JeffreyEqualityNewma wrote:

And 1967 was the last year Toronto won... just had to mention that.

it seemed like every time i clicked away from reruns of family guy, the kings scored another goal...
1 Reply
1
Reply Tue 12 Jun, 2012 05:54 am
@Region Philbis,
Right there in the first I had this sense the Kings were going to take it and to so easily. The Devils never were quite able to get themselves together last night. On the positive side, they did give a few exciting moments when they won games 4 and 5, letting us believe there might be a full 7 games.