Why do you suppose Jesus never condemned slavery?

I can't imagine why you would claim that Frank sees himself as an atheist, but thanks for the laugh.

You're welcome. It was this post that prompted the claim.

I was a theist, was agnostic for some time, now I'm atheist, slowly transition to an atheistic Buddhist. I've been through most of that spectra.
http://able2know.org/topic/17906-26#post-5112008

But on further checking I see that it was just a botched quote of aspvenom that came out looking like it was Frank's statement. I should have known better since I didn't feel the earth shake or heavens roar.

Re: Frank Apisa (Post 5118536)
That's rich, coming from you. Playground insults are about all you've got going for you, Frank.


I guess that is what you think, Setanta, but that says more about the myopia you have about the nature of your posts than it does about me.

But, whatever you say, Bubba. I'm sure you know best.

Nope. YOU are the one who appears to think he KNOWS best, Setanta.

Me...I always seem to have doubts.
1 Reply
1
Reply Thu 27 Sep, 2012 10:52 am
@mesquite,
I was wondering about that comment, Mesquite, but I neglected to respond. As you can probably see, I am into a very interesting discussion with Setanta here, and I guess the delight I am feeling has caused me to be careless about responding to others.

Glad there were no earthquakes or other catastrophes based on my non-conversion to atheism.
1 Reply
2
Reply Thu 27 Sep, 2012 10:54 am
@Frank Apisa,
You seem to have no doubts that i am angry or frastrated. You can't see or hear me, yet you childishly insist that i am angry or frustrated. By the criterion in your signature line, you are displaying weakness, because you pretend to know hat you don't know.

It is not a playground insult to point out that your signature line is idiotic. Strength and weakness are not unambigous terms. You don't describe what kind of strength or weakness you mean, so even if you think it is wise and clever, it's not. As i've already pointed out, as you came up with this as a part of your "agnostics are superior" crusade, you are hoist on your own petard. You can't know who is preteneding to know what he or she does not know unless you know yourself that there is or is not a god.

That's why it is idiotic--not that i expect you to honestly acknowledge it.
2 Replies
2
Reply Thu 27 Sep, 2012 11:37 am
@Frank Apisa,
From my seat here in the gallery that interesting discussion looks more like a couple of boys seeing who can pee the farthest. 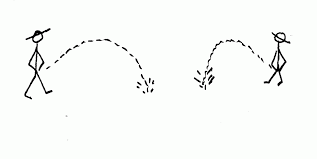 You actually do not realize how petty and angry and "frastrated" you are when you post.

Fact is, I do not know you are petty, angry, and/or "franstrated"...but I think a reasonable inference can be drawn that you are.

I understand that you use the term "idiotic" as often as possible...so if you think my comments or my signature line or anything else is idiotic...I understand completely.

I wish I could react the way you want to that, Setanta, but all I can do is guffaw. And I have done that dozens upon dozens of times the last few days.

Keep coming back and providing entertainment. Try to make your pettiness be as reasonable as possible...because that is when you are at you funniest.

I love ya, man. Do not doubt that.
1 Reply
0
Reply Thu 27 Sep, 2012 12:09 pm
@Setanta,
By the way, ole buddy...any chance you can tell me how to get my signature line to show up? I cannot see it...and you indicated there is a misspelling or erroneous punctuation in it, which I would like to correct. When it was showing up in my posts there was no missing apostrophe. Not sure what has happened, but I do want to correct it...so at least you have a correct signature line to mock.

From my seat here in the gallery that interesting discussion looks more like a couple of boys seeing who can pee the farthest.


Nope. If you read each post carefully...you will see it is Setanta peeing as far as he can...and me simply responding without doing any peeing. Be that as it may...I am finding it very interesting if only for the reason I just shared with Setanta.

If you know how I can get my sig line showing, Mesquite, I would love to know.
0 Replies
2
Reply Thu 27 Sep, 2012 12:15 pm
@Frank Apisa,
But i'm not petty (such as dissing people for their spelling) and angry and frustrated, Frank--that's just you pretending to know what you don't know, which by your own criterion is a display of weakness. As for my signature line, i pick up interesting quotes and put them there. You may think what you like of any that i use, because i assure you that i have no respect for your intellect and opinions.
1 Reply
2
Reply Thu 27 Sep, 2012 12:15 pm
@Frank Apisa,
Frank Apisa wrote:

Not sure what has happened, but I do want to correct it...so at least you have a correct signature line to mock.

1 Reply
5
Reply Thu 27 Sep, 2012 12:18 pm
@mesquite,
Yes, it is a pissing contest which is too bad because I'm of a mind which thinks it's a good thing to challenge the promoters of a system of morality, Christianity, which somehow neglected the whole issue of the morality of slavery until their founder had been dead (and risen) for approximately 1846 years.

The point, of course, is that if the Christians couldn't figure out that the Great God's command to His Chosen People that they shall have slaves was as wacky as His Command that no one should eat Lobster or Cheeseburgers, maybe we shouldn't trust them when it comes to figuring out when a human life begins, whether sex can be just for fun and that two members of the same sex should be able to have that same fun without being driven out beyond the walls of the city and stoned to death.

Christ had the right idea about women, but Paul screwed that up and we are still dealing with his idiotic view that women are somehow lesser than men. (Where'd he get that from? Not from Jesus.)
Yet we are supposed to depend on these "thinkers" to form our societies?

Knowing now that the Christian theory of a Human Centered Universe was a crap idea for its entire twenty centuries* of being, maybe we shouldn't depend upon them to guide us on the scientific matter of stem cell therapies or any other science that doesn't specifically deal with changing water into wine.

[There have been adjustments.]
Thou shalt not kill.

Joe(See John XXIII on the meaning of the words :Just War.)Nation

*(That's right. Even five hundred years after Copernicus, Christian Catholics were still insisting that our solar system was the center of a god-created universe . They gave up that idea about twenty years ago. Good, huh? Fundamentalist Christians and Islamics still are holding on tight.
Folks, there is no center of the Universe. )
2 Replies
1
Reply Thu 27 Sep, 2012 12:19 pm
@mesquite,
yup - you've got it in one (though I know one of them at least is laughing)
0 Replies
2
Reply Thu 27 Sep, 2012 12:21 pm
@Joe Nation,
well said, Joe...

then humans seem much less significant to the whole equation.

But i'm not petty (such as dissing people for their spelling)...

Yeah, you do. You did it to me earlier using that "sic" thingy.

... and angry and frustrated, Frank--that's just you pretending to know what you don't know, which by your own criterion is a display of weakness.

As for my signature line, i pick up interesting quotes and put them there. You may think what you like of any that i use, because i assure you that i have no respect for your intellect and opinions.

Ahhh...you have no respect for my intellect and opinions. What will I do? How will I ever feel whole again?

I have not pretended to know what I do not know.

you are always pretending to know things about Set's mood when he's posting and you really don't know anything about it.
1 Reply
1
Reply Thu 27 Sep, 2012 01:48 pm
@Joe Nation,
Quote:

Yet we are supposed to depend on these "thinkers" to form our societies?

Not at all Joe. You are, perforce, constrained to depend upon whichever thinkers form society. You are perfectly at liberty to change them but I can't see you doing as long as you go off into an emotional sulk rather than address my last two posts on here.

What we need is a persuasive argument that an alternative mode of thinking will suit our purposes better than the one you are whinging about. What positive advantages are there in knowing that there is no centre of the universe? What do we do with such wisdom?

How can we be sure that all religions are wrong? - Discussion by reasoning logic
What if no religions are correct, but there still is a God? - Question by neologist
We are all like little children who often say: "Mom, Dad, leave me alone, I want to be on my own". - Question by Leaffan
Beyond tribalism; How well does your religious label serve you? - Discussion by MattDavis
Is religion responsible for the opposition to peace in the Israel-Palestine conflict? - Question by maxdancona
Concern for Religious Freedom or Preaching Political Messages? - Discussion by wandeljw
Are atheists being more illogical than agnostics? - Discussion by igm
Why believe in god? The theist perspective. - Discussion by msolga
Why People Seek Solace In Gods. - Question by mark noble
Catholic remarried couples should abstain from sex - Question by Tes yeux noirs
How can a good God allow suffering - Question by SawyerMentink
Copyright © 2021 MadLab, LLC :: Terms of Service :: Privacy Policy :: Page generated in 0.03 seconds on 09/22/2021 at 11:28:47
▲ ▼