Forums: Sports, Golf, Community, Pros And Cons Of Golf, Shakira Golfs
Email this Topic • Print this Page
1
Reply Fri 15 Jun, 2012 04:13 pm
@ossobuco,
Sounds as though it's adding a lot of joy to your life!

Thinking of playing?
1 Reply
1
Reply Fri 15 Jun, 2012 04:51 pm
@dlowan,
No - I gave away my father's clubs a bunch of years ago, except for the putters. (One might be worth something, but that's not why I keep it - made by Mary Pickford Co.) Plus it tends to be a costly game. And it's hella hot here, I'm not in shape for the trek. "Woman playing on Ladera Golf Course expires after totally failing to have her club meet the ball several times".
1 Reply
1
Reply Fri 15 Jun, 2012 06:32 pm
@ossobuco,
So now there is a seventeen year old beating the pants off of the veteran golfers, off and on being first at the leaderboard. New blood... his name is Hossler, an amateur, obviously, that qualified for the Open. This probably won't last, but then maybe it will.
0 Replies
1
Reply Fri 15 Jun, 2012 07:34 pm
@ossobuco,
Ossobucco wrote:

Sounds more like a tumor to me. Have you had it scanned?
2 Replies
1
Reply Fri 15 Jun, 2012 07:57 pm
@Thomas,
Good grief, no. It is a 24 to 36 hour wait at the UNM emergency room. (They're going to build a new hospital to take care of the patients that need to be admitted.)
0 Replies
1
Reply Sat 16 Jun, 2012 04:47 pm
So (so, but not so so), this is the third day of this weirdo US Open at the Olympia Lake Course in San Francisco (precisely where in SF I have not looked up on a map). There is much talk about how hard/tricky/contrived the course is, and the pros and cons of that. I almost agree, which makes me agree with Mickleson, whom I've been busy disagreeing with re some golf course design.

A new star, or two or three, teens have been borne to the game by virtue of qualifying and not doing so badly, including the chinese fourteen year old who didn't make the cut but appears to have a sense of humor and a future. Many others with more golfing history than he did less well; Beau Hossler is a serious talent at seventeen. There's an 18 year old who made the cut too, don't remember his name as I type, but I've read about him before.

My key fun is reading The Guardian's Scott Murray's sort of loopy but sharp play by play takes - always start from the bottom:
http://www.guardian.co.uk/sport/2012/jun/16/us-open-2012-round-three-live

He swears, he makes fast asides, it's a very lively commentary. Soooooo much better than ponderous talking heads.

1 Reply
1
Reply Sun 17 Jun, 2012 07:16 pm
@ossobuco,
Still reading Scott Murray's play by play of the US Open. It reminds me (at the same time it's different) of the sports writing that brought me to follow sports when I was thirteen or fourteen, from sports stories of the year in our library, to effulgent writers of that time and earlier. I may come back and name some of those. I may be forced to send an email of appreciation to Murray at the Guardian.

Some of my lads - I know that sounds arrogant, or maybe adoptive as I could be most of their grandmothers' age - are doing well on the first day: Rory McIlroy, Keegan Bradley, Ryo Ishikawa, Ben Curtis, Francesco Molinari. Rory's not leading, but one of two in second place. Well, it's early. I'll add that Tiger's up there with a -3 as well, but I can't call him my lad* (not that I dislike him - I've just picked out some folks to follow since the martians took over my mind).

edit - now it's three holes to go.
Please, Rory, don't break your arm during one of the next three holes.
1 Reply
1
Reply Sun 12 Aug, 2012 04:39 pm
@ossobuco,
Now Rory is 7 ahead having finished 16. Others haven't done too badly, including Tiger and Graeme MacDowell, and the Guardian blog is atwirl about who will come in second, but McIlRoy has come out of his funk weeks.
1 Reply
1
Reply Sun 12 Aug, 2012 04:45 pm
@ossobuco,
The Guardian blog -
23:41 BST
Good news for David Lynn, as Pettersson's birdie putt on 17 stays on the lip. The Swede remains at -4. And McIlroy drains a tricky par saver. Still no bogey today! That is beyond brilliant. One hole to go, and he can relax. This is a majestic performance.

next quote -
McIlroy cracks his drive down the centre of the 72nd hole, then smiles broadly, with the waves crashing behind him. What a picture. What a moment for Northern Irish golf. Some superflous info there, of course. Northern Ireland currently is golf.
1 Reply
1
Reply Sun 12 Aug, 2012 05:09 pm
@ossobuco,
Ok, he won by eight shots. Yay, kiddo.
0 Replies
1
Reply Sun 9 Sep, 2012 05:32 pm
Rory did it again, she smiles, at the BMW (whatever) tourney. I read the golf.com blog about it (so much more pleasant than listening to announcers) and enjoyed the variety of players into the last - some oldies and new goodies.
0 Replies
1
Reply Tue 11 Sep, 2012 09:31 pm
@Thomas,
Tumor? Ah, that explains Frank Apriso's love of golf and other things.
0 Replies
1
Reply Wed 3 Apr, 2013 05:59 pm
While Bubba is on tv talking about being defending champ re the Masters, his son hears his voice.. 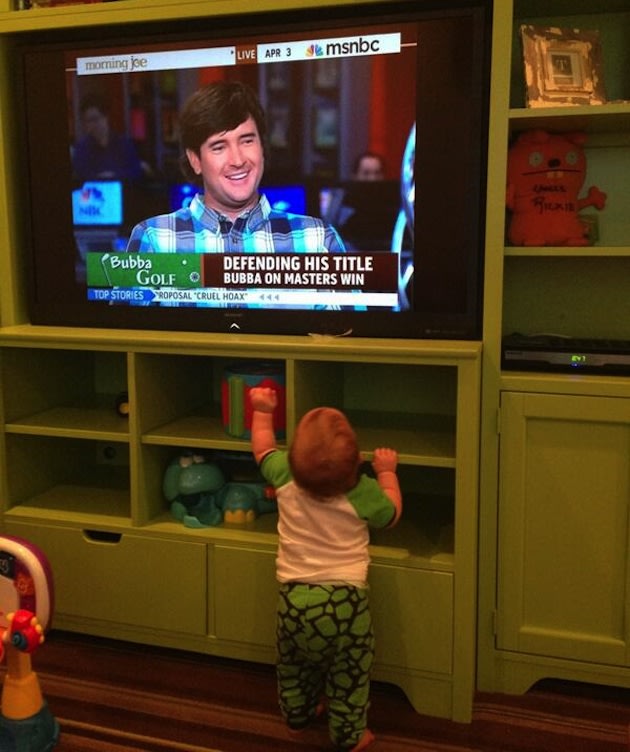 http://sports.yahoo.com/blogs/golf-devil-ball-golf/picture-bubba-watson-baby-boy-heart-extremely-happy-160708822--golf.html
0 Replies
2
Reply Sun 7 Apr, 2013 04:12 pm
I have never played more than 4 holes of Golf in my entire life...have been to driving ranges a few times...I have a couple family members that are very skilled...

2 years ago I found interest in the game through a fantasy golf game...

I have come to find out it is a very fascinating game...

Lots of little intricate concepts, understandings, factors, and skill utilizations that one must try to master...

Where I can actually see it close to a sport that I used to do a lot...Bowling...Where your own mind is your own enemy...

Wish I played it more when I was younger...