I'll be scarfing down my own franks in a much more civilized manner later on.
0 Replies
2
Reply Mon 4 Jul, 2011 02:32 pm
Joey "Jaws" Chestnut handily won for the 5th time in a row with 62 dogs in ten minutes. He easily beat out 2nd place winner, Patrick "Deep Dish" Bertoletti, who came in with 53, and my personal favorite since Kobayashi is off the scene, Eater X (He's a mystery even to himself). Eater X came in 3rd place with a disappointing 45 hot dogs.

Speaking of Kobayashi, he is now banned from the Nathan event, over a contract dispute with the MLE (Major Eating League) I had not realized that he had not competed in 2010 either, and created a disruption after the event, crashing the the winners circle, and hanging onto barricades to resist removal.

Per one account of the day: President Richard Shea, stated that "[Kobayashi] tried to jump on stage during the awards ceremony to disrupt it." With the crowd chanting, "Free Kobi!" and "Let him eat! Let him eat!”, police handcuffed him. He was charged with resisting arrest, trespassing and obstructing governmental administration and spent the rest of the 4th of July in jail awaiting an appearance in Brooklyn Criminal Court.

This year Kobayashi participated in a Manhatten event, putting down a mind boggling 69 dogs and buns. This was not an official event however.

On the other side of the gender gap, in the female competition, Sonya Thomas once again was the victor. She got down 40 dogs, compared to the 2nd and 3rd place tie of 28 by Juliet Lee and rookie Stephanie Torres.
For now, Thomas is a machine.

Here's a pic of Joey and Sonya after the match. 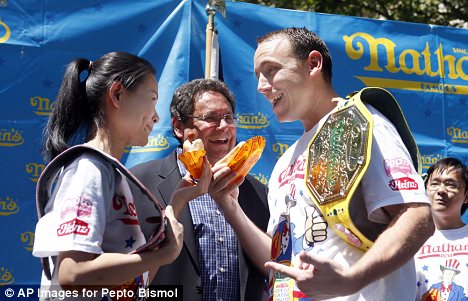