Chocolate speedway is a gay sex slang term. I just saw that on urbandictionary.com.


They've picked up on it have they? It's not a gay term, it's a non gay term to describe a particular act. It tends to be used by people who are interested in gay sex more for its comic potential than anything else.

It has a rich seam of comic potential, and you've just scratched the surface. Have you investigated any of the other jobtitles. I can post a few more if you want. How about Donkey Milker, Salad Dodger, Bunny Shooter, Sour Apple Quickstepper? Clue: None of them are gay.

You are some kind of SMUT PEDDLER. I am WRITING MY COMICS FOR KIDS. CHILDREN.


How dare you! I don't read smutty comics about gangland cats shagging God knows what, I read comics about the Archbishop Of Canterbury 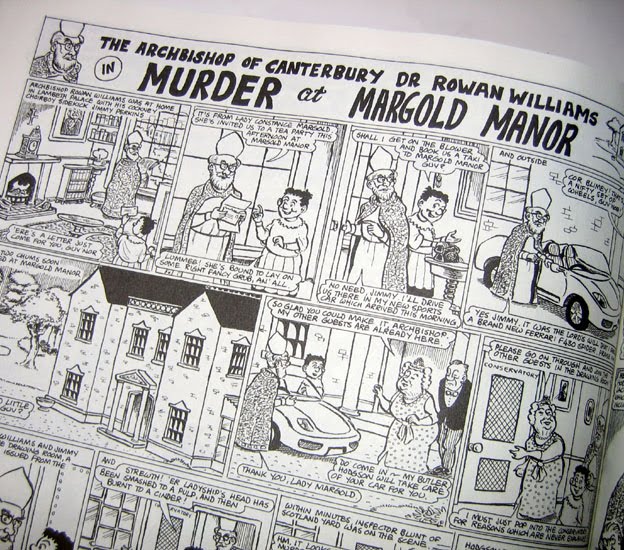 
Is that a caption for the photo I submitted.
1 Reply
1
Reply Fri 29 Jul, 2011 01:19 pm
@izzythepush,
http://en.wikipedia.org/wiki/Guardian_Angels
1 Reply
1
Reply Fri 29 Jul, 2011 02:05 pm
@JGoldman10,
Guardian Anals?
0 Replies
1
Reply Thu 3 Nov, 2011 08:42 am
@JGoldman10,
...and of course a gardener. I mean think about it! A gardener has all kinds of useful tools at his hands...a power mower, a weed whacker, pruning sheers, a rake and an edger and of course his seeder or he can take his mighty hose and unleash its fury upon villains. Yes, the gardener is always prepared when trouble occurs.
0 Replies
1
Reply Thu 3 Nov, 2011 09:46 am
To be honest about it:
I don´t think that you should have any tough guys and street fighters at all in a comic strip for kids and young people.
After all they hear and see so much of that in real life and on TV so what they need is someone very kind and guys full of love and understanding.
What about preachers who preach and win young people to be good and understanding and full of love taking care of animal in need.
1 Reply
1
Reply Fri 4 Nov, 2011 12:55 pm
@saab,
They are streetfighters - street gangs that fight crime. They aren't going to use knifes or guns and kill people. There's not going to be blood. They will fight villains but they aren't going to resort to fisticuffs all the time.

They will experiment with being superheroes when things get too tough and dangerous for them to handle in thier own strength.