Forums: Corporate Monopolies, Capitalism, Delusional-Democrat, Us Capitalism, Checks And Balances
Email this Topic • Print this Page
2
Reply Wed 4 Jun, 2014 07:24 pm
Check out Americans for Tax Fairness' new report (http://goo.gl/w6zgfp) on the bonuses Walmart paid to 8 top executives since 2009 -- and the millions of dollars in tax subsidies the corporation received for them. #WalmartEconomy

1 Reply
0
Reply Sat 14 Jun, 2014 01:00 pm
@RexRed,
What deceptive bullshit ! In this case the "Tax Breaks" were the lawful treatment of bonuses paid to 8 top executives over a six year period as business expenses - just as with salaries bonuses and benefits paid to all other Wallmart employees. The $104 million amounts to $2.17 million per year for each. As executive bonuses go for corporations the size of Wallmart that's not much.

The corporate Federal tax rate is 35% and the average State corporate tax rate is about 5.5%. Add local and property taxes and Wallmart likely pays over 50% of its profits in taxes. That's a higher overall corporate tax rate than is found in almost any other modern country in the world.
1 Reply
3
Reply Sat 14 Jun, 2014 06:51 pm
@georgeob1,
georgeob1 wrote:

What deceptive bullshit ! In this case the "Tax Breaks" were the lawful treatment of bonuses paid to 8 top executives over a six year period as business expenses - just as with salaries bonuses and benefits paid to all other Wallmart employees. The $104 million amounts to $2.17 million per year for each. As executive bonuses go for corporations the size of Wallmart that's not much.


Yes it is bullshit, while people who actually work heartily in their company are on food stamps.

Why are these CEOs paid so much? Because they monopolize, bully and cut throat smaller companies out of business...

This thread is not anti-capitalism, it is about regulating capitalism.

Our society is also socialist too, that is good also.

But corporate greed these days is obscene.


Apart from the metaphor, just what does this empty phrase mean?

Corporations exist to produce a profit on the sale of goods or services. If a corporation is an efficient producer of a material good or service then it will earn large profits.

At what point do they become "obscene" ?

A successful corporation earning large profits will usually invest those profits in the expansion of the company or innovation to produce even better goods and services. What is "obscene" about that?

What in the world do you produce apart from sappy meaningless babble?? One could argue on a basis identical to yours that, from an intellectual or literary perspective, much of your posting here is an obscene waste of bits and bytes.
0 Replies
1
Reply Wed 17 Jun, 2015 12:22 pm
Jurassic World Movie Is Beyond Ironic, According To Russell Brand
http://www.huffingtonpost.co.uk/2015/06/17/russell-brand-jurassic-world_n_7603680.html?1434553988

Capitalism is not only not working but it is cannibalizing the middle class.
1 Reply
0
Reply Wed 17 Jun, 2015 01:57 pm
@RexRed,
There are many candidate cause factors for the supposed decline ot the middle class to which you referred;

The primary one is the widespread decline of manufacturing and basic materials production (steel, aluminum, etc.) that started a few decades ago and which has eliminated large numbers of highly paid (and mostly unionized) jobs. The drivers here are competition from rising economies in Asia, primarily China. They are growing their wealth in the same way we did in the 19th century, exploiting competitive advantages associated with abundant relatively cheap labor anjd highly permissive environkmental regulation. I guess you could say that capitalism is the problem here in that, while China had a socialist economy it offered no competition at alll, and its people lived in abject socialist poverty. . It was only when they adopted capitalism that they began to accumulate some wealth and become themselves a capable economic competitor.

Meanwhile we are gradually paralyzing ourselves with increasingly restrictive environmental and labor regulations which have further reduced our competitiveness in these areas. For those who have not developed the skills required in our growing service economy this can be a painful situation.

I think the key point here is that capitalism is the real source of the needed solution, not the problem. We're facing increased economic competition precisely because other countries are casting off the chains of authoritarian socialism and planned economies in an effort to really create better living conditions for their citizens.

I don't expect Rex to allow this reality to intrude on his sophomoric delusions.
1 Reply
1
Reply Thu 18 Jun, 2015 05:11 pm
@georgeob1,
Capitalism has its benefits, but when unregulated this is what capitalism does... Coal ash spills from a stormwater pipe into the Dan River. 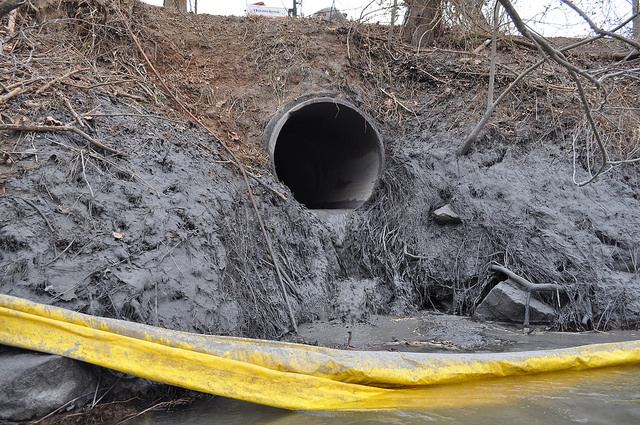 This makes me angry at my dirty nasty capitalist country!

This makes me angry at my dirty nasty capitalist country!

It is time to shut down fossil fuels (including nuclear) once and for all!


What do you suggest we use in place of fossil fuels?

You constantly want to demonize capitalism, alright then, what is the alternative? What system do you have in mind that would "fix" or "solve" these problems so they don't happen?
0 Replies
-1
Reply Mon 20 Jul, 2015 03:48 pm
@RexRed,
Well your link doesn't work so it's hard to know even what you are claiming and , given your already well-established pervasive ignorance of any of the technical or physical asperts of the realities (more often unrealities) about which you pontificate here, can actually be believed, I will remain skeptical.

I do know that, as a result of idiotic EU rules, Germany is forced to buy surplus Danish wind power (during highly intermittent high wind conditions) at above market prices. The real question here is what power levels are actually generated on average 24/;7 compared to the power demand for the same period. Wind power advocates are inclined to quote their output" in terms of the installed power generating capacity instead of what is actually produced. This is positively deceptive. On average wind power stations actually deliver only about 24% of their throretical capacity, simply because the turbines must be built to withstand the peak winds while sustained output is determined by the average wind. Offshore Plants on the Danish North Sea coast do a bit better than that due to local wind conditions. Unfortunately it all stops on a calm day.
2 Replies
3
Reply Wed 22 Jul, 2015 12:25 am
@georgeob1,
Wind power generates 140% of Denmark's electricity demand
http://www.theguardian.com/environment/2015/jul/10/denmark-wind-windfarm-power-exceed-electricity-demand
0 Replies
1
Reply Wed 22 Jul, 2015 12:45 am
Happened to read the last few comments and went to Denmark for more information.
So far as I could find out:
Jan 2014 39% of the electricity was covered by windmills. Until 2020 Denmark sees it as possible to cover 50%.
Only 25% of all energy is coverd by electricity and the 75% by fossil fuels like oil.....
1 Reply
-1
Reply Wed 22 Jul, 2015 08:00 am
@saab,
39% of electrical power demand is a lot less than the 140% Rex asserted. What could be the cause? The ratio suggests the long-standing habit of wind power protagonists to substitute generating capacity for actual power produced. There's not much of a difference between the two for nuclear plants - they generally tun at 100% output 24/7 except for periods of maintenance or refuelling. These plants in the U.S. have averaged caspacity factor (= average actual output/maximum design output) of about 90% for the last two decades. Coal and gasd plants do a bit less, but only because their fuel is more expensive and they are shutdown preferentially in periods of low demand to save cost. Wind and solar average about 25% because the wind doesn't blow, and the sun doesn't shine all the time.
1 Reply
3
Reply Wed 22 Jul, 2015 02:18 pm
@georgeob1,
Looks like neither of you even looked at the article posted by RexRed.

Unusually high winds allowed Denmark to meet all of its electricity needs – with plenty to spare for Germany, Norway and Sweden too

There now, how easy was that to read?
0 Replies
1
Reply Wed 22 Jul, 2015 02:45 pm
And for everyone's perusal, the "west" is currently in the grips of what is called "free-market" capitalism, which isn't true capitalism at all. It's a system touted by Milton Friedman, epitomised by the term "trickle-down effect", otherwise know as voodoo economics. The total takeover of Congress by corporate influence has rendered the democratic process invalid, and ineffective.

Nations like Germany are closer to true capitalism, and many of their policies are socialist by definition.

For a clearer understanding of how the once-great nation of the US of A ended up in this mess, take a look at The Shock Doctrine, by Naomi Klein.
https://vimeo.com/26718047
0 Replies
2
Reply Wed 22 Jul, 2015 03:48 pm
@georgeob1,
And let's just look at all the income that was made by Denmark selling the "free clean" extra energy to Norway, Germany and Sweden...
0 Replies
1
Reply Wed 22 Jul, 2015 11:58 pm
Even thou Denmark exports electricity from its windmills it has to import electrcity from Norway and Sweden.
The energy from windmills cannot be stored and it is also not dependeable.
Therefor Denmark has to import electricity which is dependable and can be stored.
1 Reply
1
Reply Thu 23 Jul, 2015 12:43 am
@saab,
saab wrote:

Therefor Denmark has to import electricity which is dependable and can be stored.

How do they do it? And what makes this electricity different to electricity from wind turbines that it can be stored?

2 Replies
2
Reply Thu 23 Jul, 2015 12:45 am
@Walter Hinteler,
All European countries export and import electricity, be it from wind or water turbines, nuclear or coal power stations

A very good map about it be the Fraunhofer Institute: Electricity Import and Export of Germany and its Neighbours